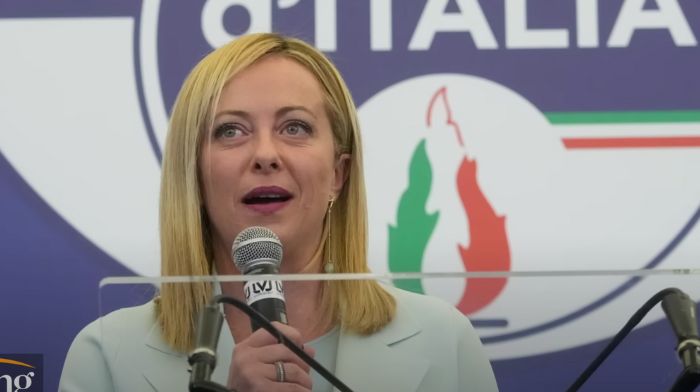 It didn’t take long for the left’s newest boogeyman to get the Big Tech censorship treatment.

Incoming Italian Prime Minister Giorgia Meloni, breathlessly described by the media as a “fascist,” already had one of her videos taken down by YouTube, the Google-owned video site.

YouTube recently removed a video of a speech that Meloni gave in 2019. In it, she put forth a conservative vision for her country.

It’s what came next that has people shaking their heads.

Watch the video and ask yourself if there’s any reason it should be censored:

RELATED: White House Ludicrously Defends Biden After He Calls Out For Deceased Congresswoman

Why Was The Video Taken Down?

The libertarian outlet Reason decided to ask YouTube why they removed the video from its website. The answer was, of course, “Oops! Our bad!”

“Upon careful review, we determined this video is not violative of our Community Guidelines and have reinstated it. We enforce our policies regardless of the speaker’s political views and when it’s brought to our attention that a video has been mistakenly removed, we review the content and take appropriate action, including restoring the relevant videos or channels—as we have done with this video.”

Let us understand:
Giorgia Meloni delivers a speech on the sanctity of the individual and criticizes the State, then her speech is censored by the powers for violating accepted standards.
And people call HER the fascist, not the authoritarians who see a need to silence voices. https://t.co/YX7XcD1Dmg

Why All The Fear?

How many people buy that explanation? How many think for a second it won’t happen again? And again and again?

Why is the left so afraid of a woman who, until just recently, more than likely no one outside of Italy had ever heard of? And what did she say in that speech that YouTube didn’t think anyone could handle?

One big reason, which is the umbrella for a whole lot of other reasons.

First and foremost, Giorgia Meloni is on the “wrong” side of the political spectrum. Here is just a snippet of what she said in that speech, given at the World Conference of Families in 2019:

“They said it’s scandalous for people to defend the natural family founded on marriage, to want to increase the birth rate, to want to place the correct value on human life, to support freedom in education, and to say no to gender ideology.”

During an interview with the Washington Post, after she identified herself as a conservative, she defined what that meant: “The issue of individual freedom, private enterprise in economy, educational freedom, the centrality of family and its role in society, the protection of borders from unchecked immigration, the defense of the Italian national identity…”

Sound like anyone else you know? It is an unapologetic defense of everything the left, both here and in Europe, are attempting to obliterate. They were values that were on the ballot in Italy, and they are clearly on the ballot in the U.S. in November. And the left knows it.

That is exactly why both Italian and American media need to tear her down post haste. Over at MSNBC, that beacon of tolerance Joy Reid described Meloni’s win as “a big win for neofascism.”

The New York Times, in their review of the Italian election, when they were not calling Meloni “hard-right,” said “fascist” or “fascism” 28 times.

Italy’s Giorgia Meloni:
“Why is family an enemy? Why is family so frightening? Because it defines us. Because it is our identity. Because everything that defines us is now an enemy for those who would like us to no longer have an identity & to simply be perfect consumer slaves” pic.twitter.com/vymKEffFgQ

Wait! Where Are The Feminists?

With her election, Giorgia Meloni becomes the first female Italian Prime Minister. What a fantastic day for women! Isn’t that what feminists are all about? Isn’t it a good thing that a woman was elected to become the head of state in a prominent European nation?

Of course it is, but there is just one problem, she is a conservative woman. Girl power only counts for feminists when they are singing the praises of a liberal woman. If you are a conservative woman, you are fair game. Just ask Sarah Palin, Nikki Haley, former White House Press Secretary Sarah Huckabee Sanders, or even Rep. Elise Stefanik (R-NY).

Because they hold conservative beliefs, conservative women are attacked for their looks, their intelligence, and anything else that will tear them down.

Strong women like Giorgia Meloni don’t need feminists. That may just be what they hate about her the most.

Congratulations #italy on over throwing the globalists.https://t.co/fqrd1Ivt7U