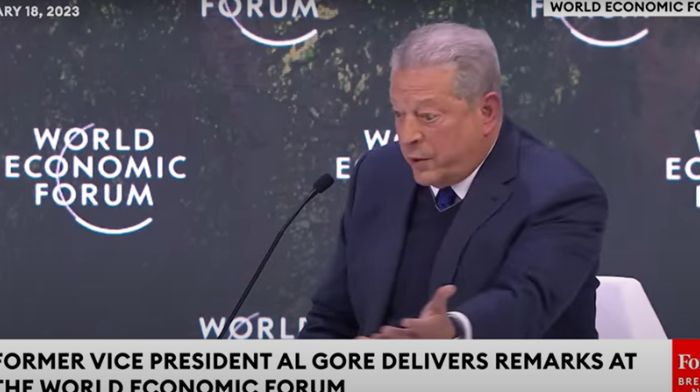 What a week it has been, dear reader! I’ve been going deep into the World Economic Forum (WEF) Davos event, and I feel I’ll get an invite to attend next year.

And who wouldn’t want to go?! You can travel in style in private jets and stay in luxurious hotel rooms. No doubt, eat some fantastic delicacies made primarily from alternative proteins like bugs, and of course, high-end prostitutes available at premium prices.

It’s essential to look back at the last few days and check out the WEF Davos 2023 greatest hits. So grab your coffee, settle in, and get ready to hear how the WEF knows best how we should live our lives.

To normal people, Davos is nothing more than a yearly reminder to get on your knees and thank the sweet baby Jesus that Al Gore and John Kerry never became President.

Beam Me Up, John Kerry

It wouldn’t be a conversation on climate change without our Presidential envoy for Climate, John Kerry. He gave quite the amazingly ego-stroking speech on how special all of the attendees are for coming together into one room with the common goal of saving the world from itself.

He even claimed that the notion of saving the world made them all almost “extraterrestrial.” That’s someone who won’t need further stroking from the Davos ladies of the night; he’s been stroked enough.

He went on to say about their goals of saving the planet:

“If you say that to most people, most people think you’re just a crazy tree-hugging, lefty, liberal, you know, do-gooder or whatever and there’s no relationship.”

I assure you, John, nobody mistakes you as a ‘do-gooder.’

RELATED: According to the Elite, Controlling Citizen Movement Will Save the Planet

I Went To Davos, And All I Got Was Yelled At By Al Gore

Former Vice President and self-proclaimed internet inventor Al Gore was in rare form this year. Because nothing motivates people more than having some old dude scream at you about how much you’re screwing up his world.

Al Gore went off on how greenhouse gasses are destroying the atmosphere:

“That’s what’s boiling the oceans, creating these atmospheric rivers, and the rain bombs, and sucking the moisture out of the land, and creating the droughts, and melting the ice and raising the sea level, and causing these waves of climate refugees.”

No, oceans not boiling
No, you can’t just claim a billion refugees

Didn’t happen, got scrubbed from websitehttps://t.co/fCuKmPYVKb

Hell, why stop there, Al? Let’s go ahead and add some more blame; perhaps greenhouse gasses are also the cause of man buns, terrible reboots of 70s TV shows, jogger dress pants, all these mysterious heart ailments, and white supremacy!

It’s interesting to note that after leaving the White House begrudgingly after losing his Presidential bid, Al Gore set up a green investment firm called Generation Investment Management. This firm has been paying him $2 million monthly for his speeches.

He earned that paycheck this week. He’s crazy, crazy like a fox.

RELATED: Everyone’s Talking About the World Economic Forum. What is It?

This week Davos allowed former CNN alum Brian Stelter, a disinformation enthusiast, to host a panel discussion on none other than hate speech and disinformation.

“Illegal hate speech, which you will have soon also in the U.S. I think that we have a strong reason why we have this in the criminal law.”

Did Brian ask her to explain why she thinks our country would disavow our First Amendment rights? Did he push back on the idea of making hate speech illegal?

Of course not! Because for him, hate speech is anything that goes against his narrative, it’s a good thing he’s considered an expert in the field of journalism.

If you were worried about Brian after he got sacked from CNN, don’t be. Not only did he get to attend Davos, and I have no doubt enjoy all of its spoils, he landed himself a fellowship at Harvard University.

What will be his duties at Harvard? Hosting panels on:

“threats to democracy and the range of potential responses from the news media.”

The only response Brian knows is to stifle any information contrary to the left-wing propaganda machine.

While the WEF and members who attended Davos this year were quick to condemn Russia and boast about their lack of invitation, they didn’t seem to have a problem with China’s President Xi Jinping giving opening remarks. It shouldn’t be surprising; the head of the WEF, Klaus Schwab, was singing his praises just a few months ago.

“China is a role model for many countries.”

I’m sorry, I need a minute to stop laughing.

“…the Chinese model is certainly a very attractive model for quite a number of countries.”

What model is he referring to? Perhaps the model of committing genocide or breeding out ‘undesirables’ like the Chinese government has done to the Uyghurs?

Oh, wait, I bet it’s their model of state-controlled media, information, education, and movement of its citizenry. Take your pick, the kind of people who attend Davos love them all.

US climate envoy John Kerry flew to Davos to implore the world to do more to reduce carbon emissions. However, when I asked him about China’s emissions, he had nothing to say. pic.twitter.com/3wSMywuymH

Finally, my favorite part is actually a flashback to Davos 2022, because it was just that great I think we should remember it again.

Australian Safety Commission Julie Grant said that the world would need to ‘recalibrate’ how it defines and views human rights. As if that’s not enough, she explained that she explicitly meant freedom of speech.

She’s not the only one who wants to turn the world into an oppressive surveillance state.

“COVID is critical because this is what convinces people to accept to legitimize total biometric surveillance.”

Because let’s not let a catastrophe go to waste; let’s use it to enslave the planet.

And it was last year that Alibaba Group president J. Michael Evans who said:

“We’re developing through technology an ability for consumers to measure their own carbon footprint.”

Cool right? Kind of like a pedometer thing; maybe it comes in different colors.

He went on to explain further:

Oh, snap, so the plot of Minority Report or the reboot of Total Recall. That sounds terrifying, because it is.

The best part is the “What are they consuming on the platform?” – i.e., what are you looking at online. Sounds pretty familiar if you followed the Twitter Files this year, someone was listening to Davos 2022, who knows what will come out of this year’s event.

Perhaps we will see a Ministry of Truth, Love, Peace, and Plenty.