Trump Jabs Biden for Claim There’s No Visitor Logs at President’s Home: ‘I Have Info on Everyone!’ 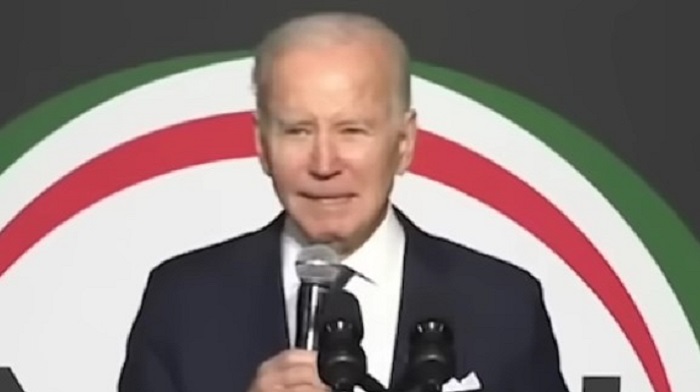 Former President Donald Trump responded to reports that the White House and Secret Service have no visitor logs from Joe Biden’s Delaware home where classified information has been found.

Three separate batches of classified documents have thus far been located – some of which were kept at the President’s home in Wilmington, Delaware.

Biden admitted some were located in a garage alongside his Corvette.

Among the whirlwind of reports, Representative James Comer (R-KY), chairman of the House Oversight Committee, demanded visitor logs from the President’s personal residence, where some of the documents were found.

The Secret Service maintains they do not “independently maintain our own visitor logs because it’s a private residence.”

That didn’t sit well with many, including former President Trump.

President Biden promised to have the most transparent administration in history but he refuses to be transparent when it matters most.

Americans need to know who had access to these classified documents.

We’ll continue to press for answers.https://t.co/axuJ8B5GPa

RELATED: Snowden Reveals the Real Scandal Over Biden’s Classified Documents Nobody is Talking About

Trump Warns He Has Info on Everyone

Trump mocked President Biden and suggested security at his home is so tight that he has information on “everyone” who comes to Mar-a-Lago.

“The White House just announced that there are no LOGS or information of any kind on visitors to the Wilmington house and flimsy, unlocked, and unsecured, but now very famous, garage,” he posted on his Truth Social media platform.

“Maybe they are smarter than we think!”

“Mar-a-Lago is a highly secured facility, with Security Cameras all over the place, and watched over by staff & our great Secret Service,” the 2024 presidential candidate continued. “I have INFO on everyone!”

Trump had his Mar-a-Lago residence raided by the FBI for allegedly having classified documents on the premises. Thus far, Biden has escaped the same fate at any of his residences despite seemingly being caught in the same predicament.

Biden assured the American people the documents were safe because the garage where he keeps his Corvette is locked.

The White House says there are no visitor logs for Biden’s Wilmington home because it is a ‘personal residence.’

If Biden’s personal residence is personal, why were classified government documents there?

RELATED: Biden Has Spent More Time Away From White House Than Trump, While Visitor Logs Can’t Be Found

Housing classified documents in a garage – which doesn’t meet security protocols by any stretch – in a ‘personal residence’ seems like an admission.

The problem becomes who else might have had access to those documents which have reportedly been linked to Ukraine, Iran, and the United Kingdom.

Hunter Biden, seemingly based on Joe himself’s say-so, had access to that garage. Did he have access to those documents, particularly in relation to Ukraine?

Hunter served on the board of Burisma Holdings, one of the largest private natural gas producers in Ukraine from 2014 to 2019.

In 2018 Hunter Biden claimed he owned the house where Joe Biden kept classified documents alongside his Corvette in the garage Via @jj_talking pic.twitter.com/L7c80MRRiS

The other problem with having no visitor logs at the Biden home is the fact that, as recently as October, Biden had spent an estimated quarter of his presidency ‘working’ from Delaware.

Most people assumed this was the ‘keep Biden in the basement’ approach that helped him win the presidency in the first place. But there is no way of knowing who was with him in the home that housed the classified documents. Or who could have laid eyes on them.

The Secret Service statement on the visitor logs is curious in and of itself.

Approximately three months ago, the New York Post revealed that their FOIA requests for visitor logs were denied by the agency for a second time.

“The Secret Service says it checked again and still can’t find any records that identify visitors to President Biden’s Delaware residences,” they wrote.

Such a statement seems to indicate they at least tried to find them. Why would they bother trying if they knew, as per the aforementioned statement, that they do not “independently maintain our own visitor logs because it’s a private residence.”

The Post described the Secret Service response as “baffling.”

Comer went even further at the time, insinuating the administration was lying about Biden’s home visitor logs.

“The claim that there are no visitor logs for President Biden’s Delaware residence is a bunch of malarkey,” he said.

In 2017, White House officials under then-President Trump announced it would be keeping most of their visitor logs secret, citing “the grave national security risks and privacy concerns of the hundreds of thousands of visitors annually.”

They never claimed they don’t exist, just that they’d be keeping them under wraps.

Biden, however, directed the National Archives to send the visitor logs from the Trump era to the House select committee investigating the January 6 riot at the Capitol.

The Biden administration has cleared the release of Trump White House visitor logs — including those from January 6, 2021 — to the special committee investigating the insurrection. pic.twitter.com/EEMsN4AP0E

A government watchdog on Tuesday filed an ethics complaint against the Biden administration.

The group, known as Protect the Public’s Trust (PPT), insists the American people “will not tolerate a two-tiered system of justice – with well-connected insiders subject to a lower standard of scrutiny than the normal citizen.”

President Biden promised one of the most ethical and transparent administrations in history if he were to be elected in 2020. It’s obvious he has failed on both fronts.