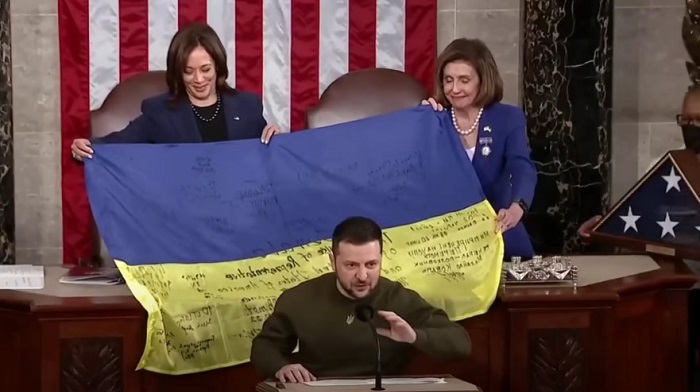 Marjorie Taylor Greene slammed a resolution brought forth by South Carolina GOP congressman Joe Wilson calling for a bust of Ukrainian president Volodymyr Zelenskyy to be displayed at the Capitol.

Wilson’s resolution declares the Fine Arts Board responsible for obtaining a bust of Zelenskyy “for display in the House of Representatives wing of the United States Capitol” in a “permanent location.”

The resolution has zero co-sponsors and has been referred to the House Committee on House Administration.

We’re confident that if Zelenskyy could join the effort as a co-sponsor, he would. He might even pay for the bust himself using money that came out of your paycheck. What a bargain.

If you’re a Republican but you sponsor legislation to put a bust of Zelenskyy in the US Capitol, you’re a pathetic RINO.

The question here is, how did Joe Wilson beat Democrats to the punch on a bust of Volodymyr Zelenskyy in the Capitol? How was it Wilson and not some other Ukraine First Republican like dearly departed Adam Kinzinger or ‘conservatives are the real terrorists’ Dan Crenshaw?

“Absolutely NOT!” she wrote on Twitter. “We serve AMERICA NOT UKRAINE!”

You’d like to think that, but reality dictates our last Congress most certainly serves Ukraine just as much, if not more than, the American people.

Here’s hoping this session of Congress is different.

Absolutely NOT!
We serve AMERICA NOT UKRAINE!

“Directing the Fine Arts Board to obtain a bust of the President of Ukraine, Volodymyr Zelenskyy, for display in the House of Representatives wing of the United States Capitol.” pic.twitter.com/CZCbtymPnl

Representative Andy Biggs (R-AZ) also seemed to take exception to the idea of a bust of the Ukrainian President being prominently displayed in the Capitol.

Nah, the odds of it being enough for Zelenskyy and his drooling disciples in Congress are slim to none.

There is now a House resolution that seeks to put a display of Zelenskyy’s head in the US Capitol.

Was the $100+ billion to Ukraine not enough?

Also fired up about the proposed bust of Zelenskyy in the Capitol was Fox News host Tucker Carlson, who once called the Ukrainian President a “troll” for repeatedly “shaking down” Congress for more money.

“You’re seeing some of the nicest people in Washington make some of the dumbest statements because they’ve been infected by this brain virus,” said Carlson.

“So members of Congress who are again decent people are now trying to spend your money on a monument to a foreign leader in the U.S. Capitol,” he added. “That’s insane.”

This is madness! Tucker Carlson on the proposal to erect a bust of Zelensky in the White House. Fox News anchor Tucker Carlson called it crazy: “Members of Congress are now trying to spend your money on a monument to a foreign leader in the U.S. Capitol … pic.twitter.com/pkULaTLfni

Insane, yes. But we’ve seen stranger things at the Capitol.

This is the same place where Democrats, inside Emancipation Hall, paid tribute to another false hero in George Floyd, taking a knee for nearly nine minutes while sporting kente cloths.

Congressional Democrats take a knee as they observe a nearly nine minute moment of silence for George Floyd at Emancipation Hall at the U.S. Capitol. https://t.co/JnqDlzMFDq pic.twitter.com/8CBdgtLUjz

Democrats last year also wanted to erect a memorial and educational exhibit to the January 6 riot at the Capitol.

The Capitol Remembrance Act, as it is known, “would serve as a memorial to the heroic law enforcement officers who lost their lives and a reminder to future generations that our democracy is only as strong as our willingness to uphold it,” according to Representative Jason Crow upon introducing the bill.

The Act has 93 co-sponsors.

How many will sign onto the Zelenskyy bust resolution?