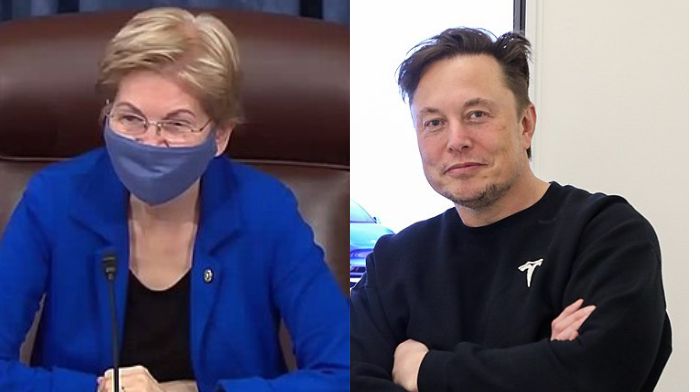 Senator Karen is truly living up to her nickname.

Far-left Democrat Senator Elizabeth Warren sent a letter to Robyn Denholm, chairman of the board at Tesla, asking whether or not Elon Musk’s time running Twitter has been harmful to the company’s investors.

An obvious ploy to try to sew discord against one of her political enemies.

In the letter, Warren (D-MA) accuses Musk of “unavoidable conflicts” and potential “misappropriation of corporate assets” following his purchase of the social media platform.

“As you know, it is the legal obligation of Tesla’s board to ensure that its CEO is meeting all his legal responsibilities and serving as an effective leader,” the congressional Karen wrote.

Elizabeth Warren has written a letter to Tesla’s board asking whether investors have been harmed by the billionaire tech mogul’s time running the social network, per NYT.

RELATED: Elon Musk Accuses Democrats Of ‘Coordinated’ Attack on Him, Suggests They Are Merely Political Puppets

Musk Fires Back at Elizabeth Warren

Tesla shares have dropped significantly since Musk’s acquisition of Twitter, and internal records reported on by CNBC indicate he authorized roughly 50 employees at the company to also work on Twitter.

Musk told lawyers involved in a lawsuit that the arrangement was “just a voluntary thing.”

“I didn’t really regard this as using Tesla assets, as I had asked just for a voluntary basis, and I did not specify any number of people,” he said, adding that there are still 120,000 other employees at Tesla.

Regarding Musk’s “legal obligations” Warren writes, “That responsibility includes ensuring that Mr. Musk is an effective CEO and that he fulfills his legal obligation to act in the best interests of Tesla and all of its shareholders, not just himself.”

Farzad Mesbahi, a former program manager for Tesla, mocked Warren, saying she “is the last person I would ever want anywhere close to Tesla.”

Musk replied, “The United States has definitely been harmed by having her as a senator.”

Senator Karen in the Flesh

The Elon Musk/Elizabeth Warren relationship has been rather tenuous in the past.

Aside from essentially ratting on Musk to the Tesla board, Warren has accused the Twitter chief of not paying taxes and “freeloading off everyone else.”

His tweet linked to a Fox News opinion piece that described Warren as a fraud for claiming Native American ancestry for years before finally apologizing and admitting she had embellished her claims in 2019.

That’s when Musk lowered the boom.

“You remind me of when I was a kid and my friend’s angry Mom would just randomly yell at everyone for no reason,” Musk tweeted. “Please don’t call the manager on me, Senator Karen.”

Please don’t call the manager on me, Senator Karen 🙏

Guess what? Senator Karen just called the manager on a successful African-American businessman.

Musk has claimed that since his purchase of Twitter, Democrat politicians have engaged in a “coordinated” attack against him.

Musk pointed out that “several other major Democrat politicians” attacked him at around the same time.

“It was coordinated,” he wrote. “Outside of party leadership and independents like Manchin, they are essentially actors on the political stage, not directors or script writers.”

Several other major Democrat politicians attacked me too, all around the same time. It was coordinated.

Outside of party leadership and independents like Manchin, they are essentially actors on the political stage, not directors or script writers.

President Biden has suggested Musk’s acquisition of Twitter and his relationships with foreign countries should be investigated after being asked if he believed the billionaire presented a “national security risk.”