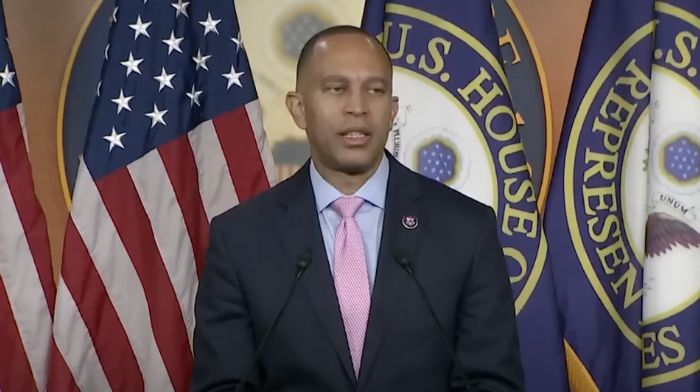 In addition to Jeffries, Reps. Katherine Clark (D-MA) will be the new Democrat Whip, and Pete Aguilar (D-CA) will become the new Democrat Caucus Chairman. The new generation of leaders taking over with the new Congress in January are younger and arguably further to the left than their predecessors.

While Pelosi checked off a box as the first female leader of the party, Jeffries will be the first black leader of House Democrats.

So who is Hakeem Jeffries? Let’s take a look.

Jeffries has denied the legitimacy of United States elections 9x. He also claimed the 2016 election was “illegitimate”.

Who is Hakeem Jeffries?

In so many words, Hakeem Jeffries personifies the modern day Democrat Party and its sharply left tilt.

In 2013, in what might be described as a preview to the “green new deal,” Jeffries voted against the Keystone XL pipeline.

In 2014, after the death of Michael Brown in Ferguson, Missouri, Democrats wasted no time making sure that the fictitious “hands up, don’t shoot” cry was heard on the House floor.

He introduced a series of speeches by the Congressional Black Caucus on the death of Brown saying, “People are fed up all across America because of the injustice involved in continuing to see young, unarmed African-American men killed as a result of a gunshot fired by a law enforcement officer. This is a problem that Congress can’t run away from.”

The claim that Brown did this was later proven to be false by Barack Obama’s own Justice Department.

Hakeem Jeffries seems to be a fan of “OK for thee but not for me.”

According to public records, Jeffries and his family live in a condo in his Brooklyn district. While average New Yorkers can pay upwards of $5,000 in property taxes, Jeffries pays just $213 per year. All because of a law he supported as a State Assembly member.

As you may have guessed, he’s one of those “pay their fair share” Democrats who refuse to pay their own share.

Being an “election denier” is a big deal for today’s Democrats. But will anyone talk about the fact that their new leader has a history of being an election denier himself? Probably not, so here it is.

First, Jeffries denied the 2016 election, complete with every Russiagate hoax contrivance available. Then, he chastised Donald Trump for questioning the 2020 election.

Then, he even questioned whether congressional seats in the 2018 midterm elections were “stolen.”

So, is it only stealing when Republicans win?

Jeffries was also outraged by Florida Gov. Ron DeSantis’ decision to fly some 50 illegal immigrants to Martha’s Vineyard in September.

Just one question, when was the last time that Rep. Jeffries was at the border to witness actual human trafficking?

After the leadership vote, Jeffries declared he would “get things done.”

You can bet that means going even further left than Pelosi was willing to go.

Hakeem Jeffries called the 2016 election ILLEGITIMATE. Why are Democrats electing an ELECTION DENIER to lead their party? Where is the media outrage labeling Jeffries a THREAT to Democracy?