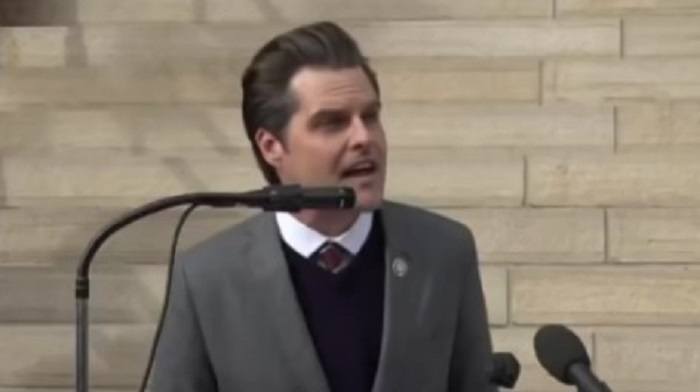 As of press time Thursday, the balance of power in Congress still remains undecided, with too many races yet to be called.

The House appears likely headed to a shift of power to the Republicans while the Senate will potentially be decided with a Georgia runoff in December.

But the margins in the House and questions lingering in the Senate are disappointing when a massive ‘red wave’ had been predicted.

Gaetz took to social media to label McCarthy, McConnell, and McDaniel a bunch of “McFailure(s).”

RELATED: Report: ‘Knives Are Out’ For Kevin McCarthy After GOP’s Lackluster Midterm Performance

Matt Gaetz is taking out his frustration predominantly on Kevin McCarthy.

The House races shouldn’t have come down to the ones too close to call. This was supposed to be a slaughter at the ballot box, a lead so comfortable things couldn’t possibly be left to other mitigating factors.

This is the equivalent of a #1 seed in the NCAA tournament having to go into overtime against the #16 seed. And, just as a coach’s career would be reevaluated after such a performance, so should McCarthy’s.

I’m not lovin’ this lack of leadership

Need a fighter to make our control of the house count https://t.co/w0kCOQVU8h

The Washington Examiner reports that Matt Gaetz has been making phone calls to encourage colleagues to turn their back on Kevin McCarthy’s bid to be the next House Speaker.

“Just as I have done after every election, you can count on me having conversations with my colleagues on matters of policy, politics, and leadership,” he said in a statement.

Fox News White House correspondent Jacqui Heinrich reported that a GOP source earlier this week had warned that the “knives are out” for McCarthy after the midterm performance.

NEW: Two sources familiar with the conversations tell me Gaetz is making calls advocating against McCarthy for Speaker. https://t.co/y37X6LKRJX

Matt Gaetz was already targeting weak Republicans, warning that there were some lawmakers voicing opposition to impeaching President Biden should the GOP take back the House.

“There are current members of the Republican majority, people who will be in the next Congress, who are arguing very, very fervently that they will oppose the use of the ‘I’ word, impeachment, in any context for any official in the Biden administration,” he said.

“And I believe that would totally misunderstand the mandate that the American people are giving us.”

That opposition is sure to grow now that the President has escaped relatively unscathed following the Republican election failure.

Gaetz says if Republicans don’t immediately begin impeachment of Biden and Cabinet officials if they get the majority “our voters will feel betrayed” heading into 2024, “and that’s why it should be investigations first, and policy as a far, far diminished priority.” pic.twitter.com/vCdKGvxnLN

Likewise, McDaniel, the niece of Senator Mitt Romney, declared that Republicans will reach across the aisle and work with President Biden following the midterms.

“Would Republicans be willing to do the same and not just be a roadblock for him?” she was asked during a CNN interview.

“We have to,” McDaniel replied. “We have to work on behalf of the American people.”

.@GOPChairwoman Ronna McDaniel: “If [Republicans] win back the House and the Senate, it’s the American people saying to Joe Biden, we want you to work on behalf of us and we want you to work across the aisle and solve the problems that we are dealing with.” pic.twitter.com/Mn5kNxRXCx

She won’t have to worry about that too much, as President Biden has declared that he plans to change nothing about the way he’s governed based on the midterm results.

Meaning he’ll continue to rule by fiat, issuing executive orders and doing his best to circumvent Republicans in Congress. And he’ll get away with it too, so long as the McFailures are running the show.