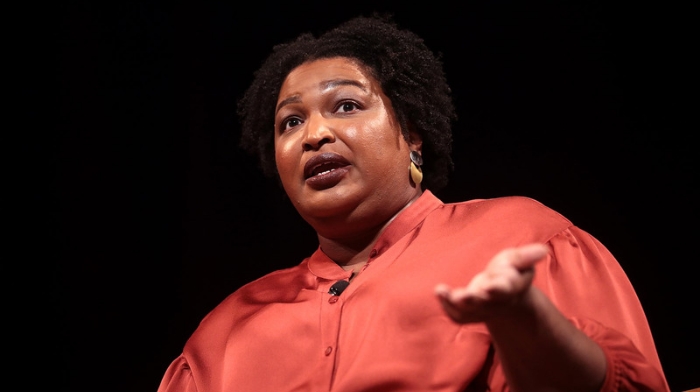 While we didn’t witness the much anticipated ‘red wave’ this last Tuesday, there was one notable blue loser – Stacey Abrams.

Between Abrams and Beto O’Rourke, I’m not sure which one has perfected the art of losing; Beto has Abrams beat since he’s run for just about everything under the sun and lost, but Abrams is just getting started.

What was unique about this particular loss for Stacey is that she acknowledged that she lost with a concession speech because it’s no longer en-vogue to be an election denier if you are a Democrat. But don’t worry, the excuses for why she lost are plenty. The liberals certainly don’t want to believe it’s because she’s a lousy candidate.

The theory behind Stacey’s epic loss to Governor Brian Kemp seems to be twofold from the left: it’s either because black men are gullible or because of white racists.

Thankfully, there is a Ph.D. professor to explain how you are white, from Georgia, and didn’t vote for Abrams – you are a racist.

Professor at @CarnegieMellon says if you didn’t vote for Stacey Abrams you’re a racist and a misogynist pic.twitter.com/hA0EPkQ43J

Oh boy, so much to unpack in this one. But first, let’s talk about that last word in that tweet, shall we?

If it looks familiar, it should; it’s an adaptation of the actual word misogyny into a made-up word. Misogyny, which just about any woman is familiar with, is an ingrained distaste and prejudice towards women.

This made-up word misogynoir is meant to signify an ingrained distaste and prejudice towards black women. What I find interesting is Ms. Anya is a professor of critical applied linguistics, which I guess means you can make up words to fit your applicable victimhood.

Now let’s discuss the meat of her argument: that white racists are to blame for Ms. Abrams’s loss.

Before We Go Any Further…

As for the charge that white Georgians are racist, it’s going to be news to them. “Professor” Anya may have missed this one tiny little point:

Those racists who didn’t vote for Stacey Abrams voted either for Raphael Warnock, who is black, or Herschel Walker, who is also black.

As you’ll see below, it doesn’t matter to Anya or people who spout this racial ideology.

The #1 reason @staceyabrams lost is because white people did NOT vote for her. They chose @BrianKempGA, a white man who has no plans for fixing systemic issues, who traffics in racist ideology around CRT & signed one of the most extreme abortion laws in the state. #staceyabrams

Just like the rest of the world, Stacey Abrams knew she would lose; I don’t believe she goes into any race to win but merely as a way to elevate herself as a celebrated fake martyr. She teed up her inevitable loss by blaming gullible black men, stating:

If none of that made sense, don’t worry; it’s not meant to make sense – it’s merely to displace blame away from herself onto the demographic she claims to care about. Interestingly, Stacey is part of the ‘They’ that Ms. Anya points her twitter finger at as pushing misinformation on who is to blame.

Enough with your hate. Gillum and Abrams lost because of their socialist ideology.
If white people have a problem voting for black people then please explain Obama’s two terms.

Much like the hit song by the late Michael Jackson, for individuals like Stacey Abrams and Uju Anya, it doesn’t matter if you’re black or white… you’re wrong and racist either way.

If the name Uju Anya sounds familiar, it’s because she’s quite the Twitter user and prolific hater. For example, when Queen Elizabeth II was lying on her deathbed, she caught Twitter fame for saying:

“I heard the chief monarch of a thieving raping genocidal empire is finally dying. May her pain be excruciating.”

She went on to state:

“That wretched woman and her bloodthirsty throne have f***** generations of my ancestors on both sides of the family, and she supervised a government that sponsored the genocide my parents and siblings survived. May she die in agony.”

Why do I feel her ancestors wouldn’t be proud of what their descendant puts out into the world? Carnegie Mellon University condemned what she said on her Twitter account. However, this individual still teaches at the high-brow Pennsylvania school.

However, this wouldn’t be the first time there had been questions about whether this educator should still be teaching.

What Do You Teach Again?

Some people should probably delete their Twitter accounts and go through some sort of Twitter detox center, including Professor Anya. She was in hot water with the university before for tweets where she used an ethnic slur directed at African Americans.

Yes, you read that right. She tweeted:

“No shade at the good sis. HOWEVER, Akata need to quit with these assumptions that their Blackness is the only one alive in the Americas…”

If you are unfamiliar with the word Akata I wouldn’t blame you, it’s not your typical ethnic slur. The term is used in a derogatory fashion to describe black individuals, specifically ancestors of slaves.

A professor of critical applied linguistics and critical sociolinguistics. In fact, the Foundational Black American organization launched a petition to remove the professor from the roughly $58,000 a year institution to no avail.

So I suppose when it comes to Ms. Anya, it doesn’t matter if you are black or black; if you aren’t black and from the same place and same historical ancestral background as her, you’re racist? It’s honestly hard to follow.

This sort of hypocrisy and ridiculousness grinds my gears, and it doesn’t do anything to solve the genuine issue of racism. So let’s take a look at one more Uju tweet:

“Your periodic reminder that white Hispanics are white people. Their ancestors enslaved Black people, and these descendants today still continue to promote and benefit from white supremacist hierarchies in societies shaped by anti-Blackness.”

Your periodic reminder that white Hispanics are white people. Their ancestors enslaved Black people, and these descendants today still continue to promote and benefit from white supremacist hierarchies in societies shaped by anti-Blackness. https://t.co/WRb8olVsgL

Stacey Abrams lost because she didn’t connect to the people she claimed to want to serve, and she’s a terrible candidate. Are there racist white voters?

Sure. Just like there are racist black professors. But they are not why Ms. Abrams lost; she’s just a great loser.