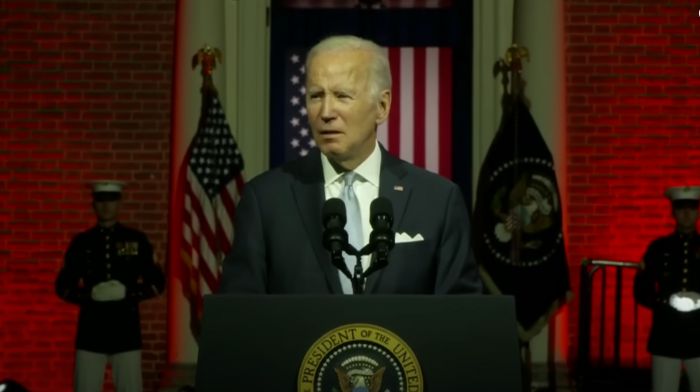 In a last ditch effort to persuade voters that voting for Democrats is the answer to America’s problems, President Joe Biden will give a speech at the Capitol on Wednesday evening to tell America that “democracy” is at stake.

Jen O’Malley Dillon is the White House Deputy Chief of Staff, and Assistant to the President. She gave a preview of what viewers might hear on Wednesday night:

“You can expect to hear from him this evening … there is a lot at stake including democracy and that everyone has a role in that.”

She added, “The other thing that will be really important … people will be able to vote… democracy works to make sure every vote is counted.”

While the Biden administration continues to insist that the Jan. 6, 2021 Capitol riot, an event that took place almost two years ago, should be one of the top issues for voters, White House Senior Adviser Anita Dunn stated why the location of the speech should also matter to voters:

“Because on January 6, we saw violence geared towards subverting democratic processes there. It is an appropriate place to make these remarks tonight.”

Biden’s speech will be delivered from Capitol Hill because, ‘that’s where there was an attempt to subvert our Democracy,’ White House official says

Kitchen table politics are now at the forefront of the 2022 Midterms. Joey Vegetable made things worse for Americans #TheDieIsCast

Biden’s speech will be sponsored by the Democrat National Committee, not the White House. And a report from CNN may have given away the true reason for the speech.

Not because anyone needs “democracy” explained to them, but, according to CNN, it could be a loose opportunity for Biden to talk about what the CNN report calls “a surge in anti-democratic rhetoric and threats of violence,” as Democrats have been trying feverishly to portray the recent attack on Paul Pelosi.

In September, Biden gave a dark, eerie speech in Philadelphia with ominous blood red lighting and two Marines standing guard in the back ground.

Biden pounded his fists and yelled, declaring Trump supporters, or “MAGA Republicans,” enemies of the state who are attempting to “promote authoritarian leaders” and “fann(ing) the flames of political violence that are a threat to our personal rights, to the pursuit of justice to the rule of law, to the very soul of this country.”

Let me get this straight, Joe Biden is heading to Capitol Hill tonight for a speech while no members of Congress are in town. And he thinks this is a demonstration of Democracy?

Give me a break.

What ‘Democracy’ Means To Joe And Dems

So what kind of “democracy” will Joe Biden be talking about? The kind that says democracy is only when people vote for the people Biden likes? The kind that says only vote for Democrats? Does inflammatory political rhetoric like that imply that all Republicans are bad?

In poll after poll, American voters have said what they are the most concerned about, and it just doesn’t match up with what Democrats think are important. Americans want to spend less at the gas pump, less at the grocery store, and not have to worry about being car-jacked on the way to either one.

Democrats are fixated, obsessed, with abortion, Jan. 6, and climate change. Accusing Republicans of the violence they are so often guilty of also does something else convenient for them. It puts Donald Trump on the ballot.

Newsflash for Democrats. Donald Trump is not on the ballot in 2022. Joe Biden and the Democrats’ disastrous policies are on the ballot. Joe Biden can make all the speeches he wants, but struggling Americans will get the final word.