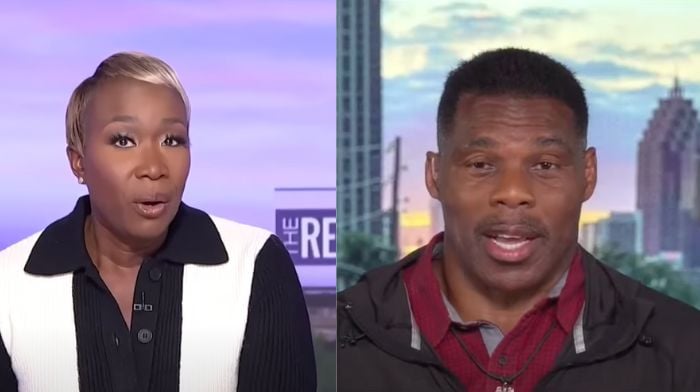 With just 11 days to go before the midterm election, a good gauge of just how nervous the Democrats are is the frequency with which the pull out the trusty old race card.

And in the case of MSNBC’s Joy Reid, how Democrats view black Republicans is on full display and it’s not pretty.

Reid was discussing the Georgia Senate race, where, in recent days, Republican Herschel Walker has pulled ahead of incumbent Sen. Raphael Warnock. So Reid began the preemptive tear down of Walker, just in case he wins and becomes the nation’s second black Republican Senator.

If you can follow along, Reid’s logic goes something like this: Republicans don’t care about black people because Senator Lindsey Graham blocked black Republican Senator Tim Scott’s police reform bill.

Graham, as Senate Judiciary Chairman, refused to bring Scott’s police reform bill up in his committee, citing the fact that it would give Democrats the chance to amend and change it.

Mr. Walker no matter what your own community says about you, keep going, get louder. Joy Reid and Alex Wagner are horrible and THEY are the ones controlled and compliant to the White Dem party. Who wants to be a part of their black community? It’s shocking.

If You Campaign For Herschel Walker, You’re A Racist… Or Something

For the crime of being politically astute, Reid says of Graham: “And now, Lindsey Graham, who when he had the opportunity to elevate an actual black United States Senator and allow him to make a contribution, he undercut his fellow South Carolina senator and destroyed the bill that he was building. If he respects black men, then why didn’t he let Tim Scott have that victory and have a legacy of his own? He undercut it.”

I’m not sure if Joy Reid is aware of this, but besides Graham’s process defense, Republicans in general don’t really support police reform.

Apparently because of this action by Graham, Reid made the Olympic-worthy jump to this conclusion:

“It’s showing you they don’t want a thinking black senator. He’s too much for them. They were like, ‘You can be here and wave quietly and silently wave, Tim Scott, but the minute you try to legislate, Lindsey Graham – your fellow South Carolina senator – is going to cut the legs out from under you.’ What they want is Herschel, who’s gonna sit there quietly and nod, and nod, and nod while he’s being pointed to as if he is a prop.”

If you’re confused, it only proves that you are a sane person.

I’m a Fox News host but I gotta admit I am STOKED to watch Election Night Coverage on MSNBC because it’s gonna be HILARIOUS. Vegas has the over under on Joy Reid saying “White Supremacy” at 85 and “Fascism” at 76.

On the panel with Reid was former Republican National Committee Chairman Michael Steele, who is also black.

Steele nodded in agreement and said:

“To that point, here is the question for Lindsey and Cotton and others. So are you, you know, going to be holding Senator Walker’s hand every day walking through the Senate halls? Are you going to be managing his schedule and his calendar? What kind of Senator do you think he’s actually going to be? What kind of staff is he going to be able to put together?”

Reid cut in with a bit of snark and said, “Whoever they give him!”

Did you catch that? While accusing Republicans of wanting a “prop,” Reid and Steele insinuate that Walker would be incapable of creating calendars and hiring a staff.

And depending on how well Republicans do on election night, Joy Reid may have a whole lot more “props” to talk about. According to the Washington Post, there are 28 black Republicans on the ballot in November.

I am, in fact, a thinking black Senator.@JoyAnnReid you do not speak for me or any other black conservative and are directly contributing to the divisive rhetoric you and @TheDemocrats claim to be against.https://t.co/ruveOtsagr