Why Did Steve Bannon Get Prison Time? Simple: He’s A Republican 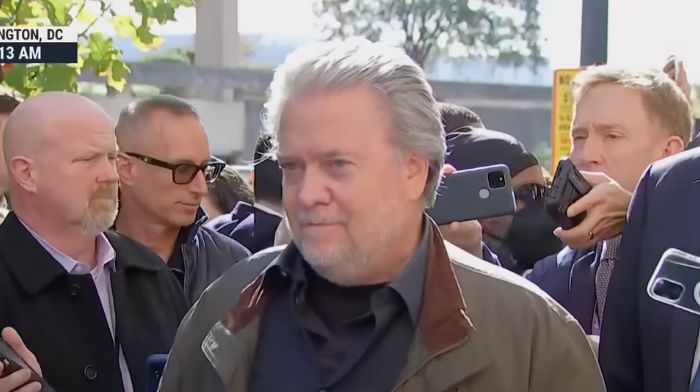 Former senior Trump advisor Steve Bannon, who repeatedly denied a subpoena to testify before the House Select Committee on Jan. 6, was sentenced to four months in jail and received a fine of $6,500.

Justice Department prosecutors argued that Bannon “pursued a bad-faith strategy of defiance and contempt” since being served with the subpoena last November. They also stated to the court, “A person could have shown no greater contempt than the Defendant did in his defiance of the Committee’s subpoena.”

Prosecutors also argued that Bannon had made unfavorable public comments about the committee in general, saying that those comments were meant to prevent the committee from finding out what happened the day of the riot in order to keep anything like it from happening again.

For critics of the Biden Justice Department, that Bannon received a sentence for Contempt of Congress while others didn’t is just more proof of a politicized DOJ.

To the world my dad is one person, but to me he is the world.

My dad has always stood with me and I will always stand with him.

RELATED: Twitter Employees Melt Down Following Report That Elon Musk Will Fire 75% Of Them – ‘Billionaires Are A**holes’

The First Amendment Is A Problem For The Government

DOJ prosecutors were especially troubled by what they called Bannon’s “public comments,” you know, the ones you can make to whomever, about what ever, whenever you want because this is a free country with a First Amendment.

Steve Bannon was a public figure prior to his time in the White House, but his association with Donald Trump, and the fact that he has a big public platform to speak in the form of his very popular “War Room” podcast, made him an even bigger problem for the government.

The temper tantrum thrown by DOJ prosecutors went like this:

“The Defendant’s statements prove that his contempt was not aimed at protecting executive privilege or the Constitution, rather it was aimed at undermining the Committee’s efforts to investigate an historic attack on government. The Defendant launched attacks on the Committee and the criminal justice process immediately after his arraignment, on November 15, 2021, when he gathered the press outside of the courthouse and joined his attorneys in a five-minute statement.”

Isn’t there a little something in the Constitution that says, “Congress shall make no law respecting an establishment of religion, or prohibiting the free exercise thereof; or abridging the freedom of speech, or of the press; or the right of the people peaceably to assemble, and to petition the Government for a redress of grievances.”

Seems like saying whatever you want about the government on your own platform might come under “redress of grievances.”

That tells you everything you need to know.

It seems more and more often that it all depends on which letter, an R or a D you have after your name, determines how much attention the federal machinery of justice will pay to you.

Be a sitting Attorney General and play a significant role in an actual gun-running operation, like Eric Holder, and the DOJ will do nothing if Congress finds you in contempt.

Be a high ranking official in the IRS, one of the most powerful agencies in the nation, and expressly target conservative and Tea Party groups when they apply for tax exempt status, like Lois Lerner, and the DOJ will do nothing if Congress finds you in contempt.

But for Steve Bannon, Contempt of Congress means prison time.

Joe Biden has seen to it that Merrick Garland and the DOJ is his own private police force, and political opponents will be dealt with accordingly.

Late Friday, former President Donald Trump himself was issued a subpoena by the Jan. 6 Committee. If he refuses, as Lerner and Holder did, do you think the DOJ will ignore a Contempt of Congress charge?

Steve Bannon said to reporters as he walked into court on Friday, “This illegitimate regime, their judgment day is on 8 November when the Biden administration ends.”

I stand with Steve Bannon. This isn’t justice. It’s tyranny and total bullshit. We need to do this to Democrats when we regain power. https://t.co/KpQE1D8jCz