The Best Of The Best: Chuck Norris’ Top 10 Greatest Films In One Roundhouse Kick List

by Terry Ward
in Movie, Politics
0 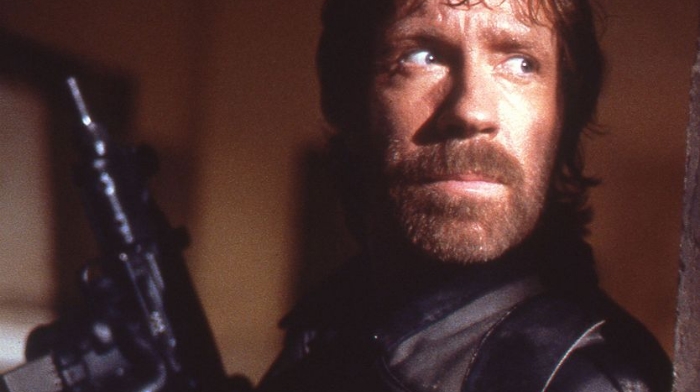 Hands down, the most remarkable man who has ever walked this Earth is none other than Chuck Norris. I heard the other day that archaeologists found some missing passages believed to be from The Bible. The missing passages explained that when God said, “Let there be light” Chuck Norris responded with, “Say Please.”

Did you like that one? Because I have so many more to share with you, just accept that this will be one of those articles.

All kidding aside, I’ve always had a soft spot for the man, the myth, and the legend. As a fellow Air Force veteran, I dig just about any famous folks who took the time to serve their nation.

Chuck is also a man with the iron constitution to stand up for what he believes in and openly espouses his conservative views on the regular. Who doesn’t respect that from a Hollywood icon in 2022?

Chuck Norris doesn’t turn off the light, he turns on the dark😂 https://t.co/zOocwuYRm4

You know, it’s said that Chuck Norris scored expert on every weapon while he was in the Air Force, without having to pull a single trigger. Not all that different from all Air Force folks, I suppose. (I kid, I kid.)

In honor of the prolific martial artist, I’ve listed some of my favorite Chuck Norris movies for you when you need to shut out the real world and watch a solid American whoop some serious; you know what.

This classic police film follows San Francisco Police Department narcotics cop Sean Kane, played by Chuck Norris. He sets out to avenge his partner’s death. However, when his partner is killed, Kane loses his mind and is forced to resign from the force, going at it alone as he tracks down the killers.

Perhaps this film is so notable for Norris’s zero facial hair status. My favorite scene is when Chuck Norris judo chops a man off a cliff.

Chuck Norris and an all-star cast of BMFcast alums star in 1981’s AN EYE FOR AN EYE! Episode 550 is now available in all the usual podcast places. pic.twitter.com/umEyIQnOsL

I’m a colossal mobster flick fanatic, and while I probably wouldn’t have this movie on my Top 10 mobster movies list, it does make it on my Chuck Norris list. Norris plays a cooly named Cliff Garrett.

Garrett is, of course, an undercover cop embedded deep in a criminal organization. Working for the DEA, Garrett takes on his new secret life as a hitman named Danny Grogan.

His job, take down Seattle mob boss Marco Luganni because Seattle is so well known for its deep Italian Cosa Nostra.

Chuck Norris in The Hitman (1991) pic.twitter.com/QHgYlGVeIB

Yet another beardless cinematic adventure, Chuck Norris plays an ex-Army Commando with a contract on his head. After the war, his character, John T. Booker, now dedicates his life to education as a teacher.

When his fellow elite military team starts dying off, he quits his pursuit to educate the masses to seek out the killers. You should watch this, if only for the bizarre opening credit digitized fight scenes.

Oh, and he jump-kicks a guy through a windshield of a moving car, which is fantastic.

In an excellent old-fashioned ninja fight movie, Chuck Norris plays a martial artist contracted to protect wealthy socialites. One, in particular, is Justine, played by Karen Carlson, who is inexplicably targeted by a ruthless ninja clan.

In a classic baby carriage ruse, a woman in one scene pretends to be pushing her baby when she has a submachine gun cradled in the carriage. The purpose? To shoot up some ninjas in a passing vehicle.

A bit of a change of pace for Chuck Norris fans; this movie has a taste of horror and science fiction. Norris plays a Sheriff who has to try to stop a maniacal killer.

The twist is that evil scientists created the killer, and the inhuman killer can self-heal. A fair match for Chuck? I should think so.

Oh, and did I mention the killer is a mute, hence you know… silent rage. Also, Chuck Norris’ rotund deputy sidekick is always good for a chuckle.

A classic good cop saves the world story where Chuck Norris plays Eddie Cusack, a Chicago cop who plays by his own rules. His police department shuns him for outing police corruption. As a result, Cusack is on his own, which is probably what he would prefer.

But if that’s not enough, besides Chuck Norris’ lethal roundhouse kicks, he also utilizes a remote-controlled rocket launcher tank. Because don’t all police departments have one of those?

“Code of Silence” starring Chuck Norris was the #1 movie at box office on this date in 1985. The film knocked “Stick” out of the top spot. #80s #80smovies #actionstar pic.twitter.com/DU6al6fGze

If you are unfamiliar with Chuck Norris’ iconic character Colonel James Braddock, I’m not sure you’re an American. However, Colonel Braddock is a decorated Vietnam veteran and former prisoner of war, so you know he’s hard as Hell.

Everyone else back home might feel like the war is over, but until Colonel Braddock declares it, the war is still on. So Chuck Norris’ character wages a one-man mission to bring back all the Americans left behind.

Who doesn’t love that plot?

If you haven’t seen the Chuck Norris movies that I’ve listed so far – just stop reading, watch them, and come back to finish my article.

Related: Why This House Of Disney Fans Canceled Disney+ And Said Goodbye To Mickey

Honestly, this is a Bruce Lee movie, but Chuck Norris is in it. And he fights Bruce Lee in a boss fight in none other than The Colosseum in Rome.

Chuck Norris plays the bad guy in this movie which is interesting. Also, there is a bizarre preponderance of random kitty shots during the fight.

That’s not a euphemism. Literal kitty cats meowing and hissing. Watching a smooth Bruce Lee fight a hairy-chested Chuck Norris is why this film makes it on the list.

Bruce Lee in The Way of the Dragon Spent 45 hours on The Roman Coliseum Fight scene with Chuck Norris. Bruce Lee’s Choreographed instructions took up nearly a quarter of the script. pic.twitter.com/uvhFJlZ8bz

The birth of Norris as a Texas Ranger, J.J. McQuade prefers to fight alone. So you could say…he’s a lone wolf.

However, in this cinematic masterpiece, he’s forced to team up with two others to take down bad guy Rawley Wilkes, played by David Carradine. So you could say the lone wolf rolls in a wolf pack.

In fact, they say it in the preview; it’s hilarious.

If that’s not enough for you, at one point, McQuade gets buried in his supercharged Bronco, but that doesn’t stop him. Instead, he turns that supercharger on and guns it, emerging from his dusty tomb.

My all-time favorite Chuck Norris film is Delta Force, much to my husband’s dismay. He would’ve put Silent Rage as #1, but he’s not writing this article, so he can deal with it.

Starring alongside Lee Marvin, these two take on Lebanese terrorists who have hijacked a commercial flight full of Americans. In addition to his usual punches and kicks, Chuck Norris spends a fair amount of time on a motorcycle with machine guns attached, which is incredible.

Other big names in this movie include George Kennedy and Robert Forster. Chuck Norris doesn’t negotiate with terrorists, nor does his character in this movie.

#OTD Menahem Golan’s The Delta Force (1986) had its stateside release. The first installment in the Delta Force series that stars Chuck Norris and Lee Marvin as leaders of the Delta Force, a special operations military unit, which are tasked with ending a hostage incident. pic.twitter.com/kNqnHxbUJi

There you have it, my Top 10 Chuck Norris flicks. Remember, on the 7th day, the Good Lord rested…and Chuck Norris took over. You’re welcome. The end.