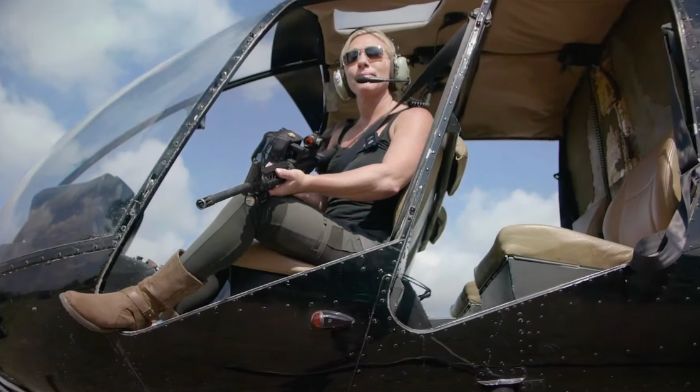 Everyone knows that if there’s one thing the left hates more than anything else, it’s the Second Amendment.

It is just the latest in what is getting to be a collection of really clever campaign ads by Republicans. And it is driving the left crazy.

RELATED: What Happens When A Fact-Checker Doesn’t Get The Facts Right?

“We’ve got sky-rocketing inflation, high diesel fuel and Democrats’ America last policies. Democrats aren’t the only ones destroying farmers’ ability to put food on the table.”

The video then goes to an overhead view of a feral hog running across open land. Greene continues, “We’ve got wild hogs destroying farmers’ fields. So we decided to go hog hunting.”

The next scene is Greene in a helicopter shooting at feral hogs. According to a report from the Houston Chronicle, hogs, if their population is left unchecked, cause “extensive damage to plants, animals, people, and the state’s economy,” via the destruction of farmland.

Greene then says, “Let’s help American farmers out,” and then invites contestants to a “hog Hunting trip for 2 with MTG.” The contest includes “Round trip airfare, ground transportation, and lodging!”

The ad ends with Greene saying, “Sign up below and let’s go in that helicopter and go hog hunting! Enter to win now!” The screen goes to black with the words, “SAVE AMERICA STOP COMMUNISM.”

It did not take long for left-wing media to attack. The Huffington Post seemingly accused Greene of wanting to shoot Democrats – here’s their headline:

It was an attack that Greene did not take lightly, and her response is a good part of the reason she is popular with America First Republicans.

.@HuffPost I demand you change this headline and your lies about me immediately.

Your freedom of press is not freedom to lie about me.

I NEVER said anything like this and did NOT call for violence on Democrats.

And the best part, it took her more than one tweet to call out the Huffington Post.

Lee Moran, your political activist posing as a journalist writing for your hard left political blog, should be fired immediately for such a lie.

Your editor should be fired for using his position to green light such atrocious lies and character assassinations against me.

Greene also took a stand for her fellow Republicans.

There is not one single Republican that has ever aligned with Nazism, fascism, Marxism, socialism, communism, or any other awful political ideology.

But I can’t say the same about Democrats, Hollywood elites, or the media.

Your projection is becoming exposed.

Maybe it is because they are so consumed with Trump Derangement Syndrome or which bathrooms to use, it’s hard to tell, but Democrat campaign ads are just not as much of a good time as Republican ads.

A recent campaign ad by Florida Gov. Ron DeSantis not only uses the popularity of the new Top Gun movie, which is a great idea for a Navy veteran like himself, but gives all conservatives some good rules of thumb to remember about the media.

Rules of Engagement are as Follows:

Senator Rand Paul, although a strong supporter of the Second Amendment, chose different kinds of arms.

To destroy the U.S. tax code, Rand went medieval – with fire, a woodchipper, and a chainsaw.

But at least for now, the 2022 TPIPAA (The Political Insider Political Ad Award) has to go to none other than former President Donald Trump.

It’s no wonder the left is angry all the time.