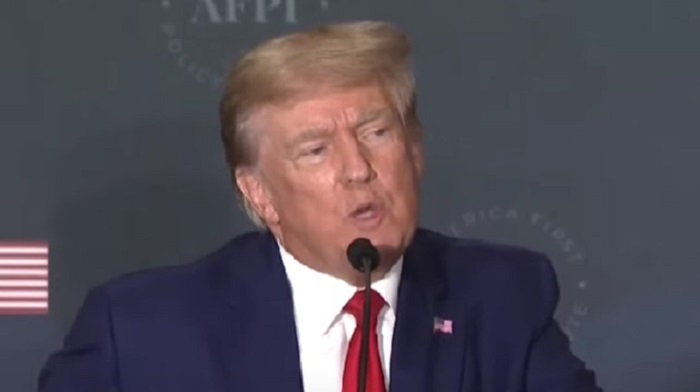 Donald Trump threatened to sue Fox News and a group of ‘Never Trumpers’ following an attack ad that ran on the network calling his supporters “suckers.”

The ad was produced by the Lincoln Project, an island of misfit grifters who once claimed to be Republicans but seemingly operate only to vanquish the former President. Their website reads:

The Lincoln Project launched with two stated objectives. The first was to defeat Donald Trump at the ballot box. The second was to ensure Trumpism failed alongside him.

The attack ad that ran on Fox accuses Trump of trying to line his pockets by denying the results of the 2020 presidential election and accepting donations to fight back against unproven claims of election fraud.

“It was a sucker’s game all along,” the ad’s narrators allege. “And you know who the sucker is? It’s you.”

The Lincoln Project’s ‘Sucker’ ad can be seen below …

Trump excoriated the Lincoln Project on his Truth Social media site, calling them “perverts and lowlifes.”

The group’s co-founder, John Weaver, who has a wife and two children, was accused by nearly two dozen young men of having sexually harassed and ‘groomed’ them.

According to The New York Times, Weaver offered young men professional support in exchange for sex. The Lincoln Project announced that they would conduct an external investigation into his actions.

Steve Schmidt, another co-founder, was forced to resign for mishandling the claims.

He then pivoted to the “Paul Ryun (sic) run” Fox News network, accusing them of setting standards higher for ads of his own than those of anti-Trump groups.

“The perverts should not be allowed to ‘false advertise,’ and Fox News should not allow it to happen,” he said. “See you all in Court!”

This morning on Truth Social, Trump threatened to file a lawsuit against Fox News over airing ads on their network from The Lincoln Project. He said the Lincoln Project “should not be allowed to ‘false advertise,’ and Fox News should not allow it to happen. See you all in Court!”

Rick Wilson Taunts – ‘Go For It’

Rick Wilson, yet another co-founder of the Lincoln Project, fired back after Trump’s threat to sue them and Fox News, using a term normally reserved to describe himself.

Donald Trump is “Truthing” that he’s going to sue @ProjectLincoln.

I have words for him. pic.twitter.com/0Cnyu5xQ3W

Trump has previously referred to the Lincoln Project as “loser types” while his campaign has called them a “pathetic little club of irrelevant and faux ‘Republicans,’ who are upset that they’ve lost all of their power and influence inside the Republican Party.”

Watch that tweeted video of Wilson again and try to argue that he’s wrong.

Fox News refused to run ads in 2021 from MyPillow CEO Mike Lindell who claimed they would provide proof of fraud in the 2020 election. Proof that has yet to surface.

The Trump campaign in 2018 produced an anti-illegal immigration ad that CNN labeled “racist.”

The ad featured courtroom footage of Luis Bracamontes, an illegal immigrant who killed two sheriff’s deputies in California in 2014.

During his sentencing, Bracamontes repeatedly smiled at the families of the victims and expressed joy that he had killed the sheriffs. He vowed to “break out soon and kill more.”

“Who else would Democrats let in?”

That racist Trump ad WAS running on Fox News, but not anymore: “Upon further review, FOX News pulled the ad yesterday and it will not appear on either FOX News Channel or FOX Business Network,” ad sales president Marianne Gambelli says. https://t.co/BJWKspmiwM

“Upon further review, Fox News pulled the ad yesterday and it will not appear on either Fox News Channel or Fox Business Network,” Fox told CNN at the time, though they offered no explanation.

Fox News, over several weeks prior to the 2020 election, ran pro-Biden ads in nearly every commercial break.