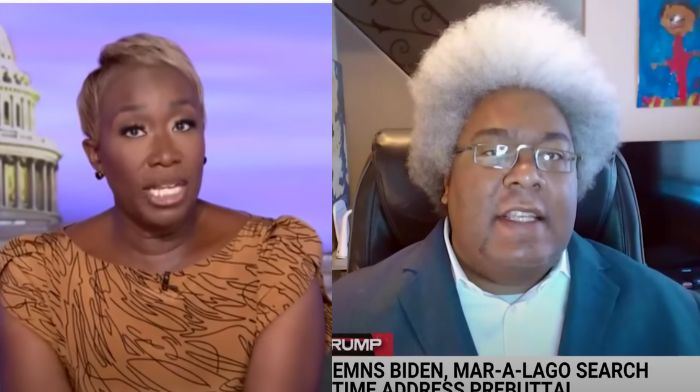 It is always amusing to watch the left, those paragons of fair treatment for all, become quivering piles of raging jello when former President Donald Trump is actually treated fairly.

That’s what happened on Monday when MSNBC host Joy Reid and a panel of her fellow leftists discussed a judge granting Trump’s request for a special master to review documents taken by the FBI during last month’s raid on Trump’s home, Mar-a-Lago in Florida.

But as it happens, there’s also a brand new anti-Trump conspiracy.

MSNBC’s @JoyAnnReid says there could be a connection between classified documents at Mar-a-Lago and CIA assets who were killed in 2021: “They did happen at a time when Trump did have custody of some really sensitive information” pic.twitter.com/xbTI4AwEgp

Joy is always thinking. And at this point she was thinking it was time to peddle a new Trump conspiracy theory. Now she wasn’t saying it was true or anything….

“We know that in 2021 that there was a rash of deaths of American spies, they were being caught, they were being killed. This is a very real and exigent circumstance, and the CIA has admitted to that. Now, we are not saying that we know that there is some connection between the purloin documents and those events, but they did happen at a time when Trump did have custody of some really sensitive information that he shouldn’t have had. You know, you think about that.”

Joy Reid is what is wrong with this country.

Other Leftist Attempts At Conspiracy Theory

After the FBI raid at Mar-a-Lago, the media made several attempts to speculate on just exactly it was the FBI was looking for. The Washington Post reported that, “according to people familiar with the investigation,” documents related to nuclear weapons were among the items being searched for at the Trump estate.

Then, a photo of what appears to be documents with top secret classification cover sheets on them were spread out on the floor was released. The New York Times reported that this was just standard operating procedure for federal agents, you know, taking pictures of what is supposed to be classified, highly sensitive documents, and publishing them.

The latest MSNBC theory sounds strikingly similar to the 2020 unsubstantiated accounts that Russian President Vladimir Putin was offering bounties to the Taliban to kill American troops in Afghanistan.

The intelligence was never anything above the moderate confidence level, but candidate Biden used it as fact to bash Trump during the campaign. However, once Biden was elected, and began to get more detailed intelligence briefings, his remarks about Russian bounties for the Taliban became more cautious. Sometimes, even Democrats have to admit there is no evidence.

Question President Biden. Since questioning the election with ridiculous conspiracy theories is extremist behavior, will you be apologizing for democrats questioning elections in 2000,2004, and 2016?

RELATED: Education Dept. Student Loan Projections Off By $311B

Along for the ride on the panel with Joy Reid was Justice Correspondent for The Nation and far left frequent MSNBC flyer Ellie Mystal. His meltdown du jour was caused by the Republican judge who granted the special master review:

Mystal also recently stated that Joe Biden’s horrific and divisive speech calling half of Americans enemies of the state, he really didn’t go far enough. Even though Biden dragged out the race card mentioning white supremacists, it just wasn’t exciting enough for Mystal who said, “I don’t know who ‘It’s not all Republicans, just MAGA Republicans’ [is] for. I’m sure there are some white supremacists who will vote with white supremacists, who don’t think they are White supremacists.” Mystal concluded that, “It’s not for me.”

A few of Joy Reid’s most recent unforgettables, in March following the Russian invasion of Ukraine, world concern for the situation was extremely prevalent and pronounced around the world. Joy Reid wasn’t having any of that.

She declared that the reason that much of the world cared about this invasion was because of course, it is a nation populated by white Christians.

Joy Reid makes everything about race again…Claims people are more compassionate towards Ukraine because it’s ‘White And Christian’ pic.twitter.com/6y7Tsrtx4B

But maybe Joy Reid’s recent most entertaining moment came in the form of an actual serious conversation with Rep. Cori Bush (D-MO), regarding, wait for it…sperm regulation, in the middle of a discussion about abortion.

During a rally on Saturday night in Pennsylvania, Trump claimed that FBI agents searched 16-year old Barron Trump’s bedroom. How long will it take Joy Reid and company to conclude he is a Russian spy?