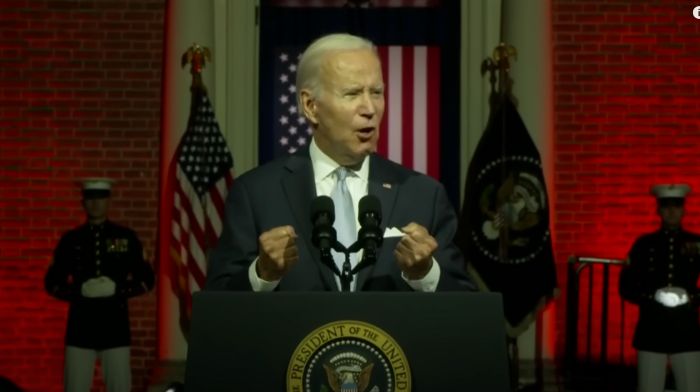 Democrats and the left may find themselves in several awkward positions the day after President Joe Biden declared war on half of his fellow citizens.

A quick perusal of social media will give you the standard number of leftists who think Biden gave the speech of his life.

RELATED: Trump Has Perfect Response To Biden’s ‘Enemies Of The State’ Speech Attacking MAGA Republicans: ‘He Must Be Insane’

Before he launched into his attack on half of the nation, Joe Biden made a phony attempt to try to “differentiate” between “MAGA Republicans” and other Republicans:

Translation: Republicans who cave to Democrats.

Hayes brought up the fact that Biden managed to remember to play to the race hustler wing of the Democrat Party, and make a reference to white supremacists at the end of the speech saying, “No matter what the White supremacists and extremists say, I made a bet on you, the American people, and that bet is paying off.”

Oddly, this did not bring a smile to Mystal’s face.

I just talked to a liberal friend who said after tonight’s speech from Joe Biden, she’s done with the Democrats.

“I can no longer defend his hate for half the country. This isn’t what I stand for.”

Not Everyone Loved The Speech

Joe Biden gave his speech in Philadelphia, just outside Independence Hall, to a live audience. But not everyone was as enamored with it as leftists on MSNBC. During the 24-minute speech, a heckler could be heard shouting, “F*** Joe Biden.”

While the heckler continued, Biden made sure that he stood up for free speech, at least in public and said, “They’re entitled to be outrageous. This is a democracy. Good manners is nothing they’ve ever suffered from.”

Mystal liked Biden’s acknowledgment that the heckler was within his rights do so saying, “I think this is a really great bit, when he says to the heckler, that dude, that man, that person, on the other side, is entitled to be outrageous.”

Unsurprisingly, you won’t hear anyone demand Mystal come up with an example.

Listen to @POTUS speech again, and replace the term “MAGA Republican” with “Jew”, “Muslim”, “Black”, “Japanese”, or any other ethic, racial or religious group, and you’ll truly appreciate the tenor and terror of what you just heard.

Donald Trump responded to Biden’s accusations in the speech, which had to be the most divisive and dangerous speech ever given by an American President. On his “Truth Social” platform he called the speech “awkward and angry.” He also said:

“Someone should explain to Joe Biden, slowly but passionately, that MAGA means, as powerfully as mere words can get, MAKE AMERICA GREAT AGAIN! If he doesn’t want to Make America Great Again, which through words, action, and thought, he doesn’t, then he certainly should not be representing the United States of America! If you look at the words and meaning of the awkward and angry Biden speech tonight, he threatened America, including with the possible use of military force. He must be insane, or suffering from late-stage dementia!”

Joe Biden arguably delivered the most divisive speech in the history of the American presidency.