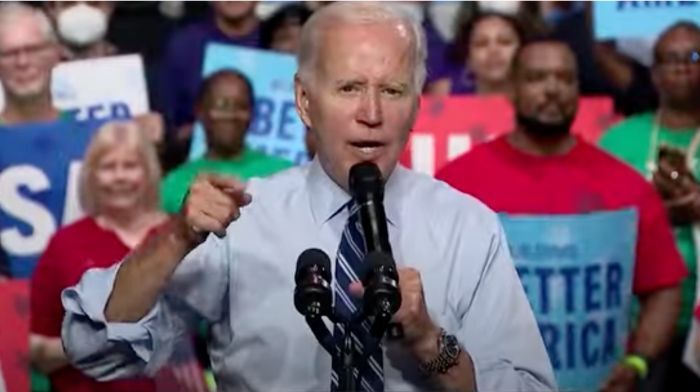 In 2016, Hillary Clinton coined the phrase “basket of deplorables” when talking about Trump supporters during the presidential campaign. On Thursday, President Joe Biden may have had his own “deplorable” moment.

Biden appeared at a fundraising event in Bethesda, Maryland hosted by the Democrat National Committee (DNC). While speaking to the roughly 100 people attending the event, Biden said this:

“What we’re seeing now is either the beginning or the death knell of an extreme MAGA philosophy. It’s not just Trump, it’s the entire philosophy that underpins the — I’m going to say something, it’s like semi-fascism.”

Is the President of the United States calling 74 million of his fellow Americans, who have done nothing but have a different opinion, fascists?

“The MAGA Republicans don’t just threaten our personal rights and economic security. They’re a threat to our very democracy. They refuse to accept the will of the people. They embrace … political violence. They don’t believe in democracy.”

Joe Biden and Democrats have already strategized that that they would attempt to portray Republicans as pursuing an, “extreme MAGA agenda that costs families.” And White House Press Secretary Karine Jean-Pierre gave a bit of a hint about Biden’s comments earlier Thursday, saying he would lay out “the choice before Americans.”

Biden’s appearance was his first pre-midterm event. In the next few weeks, he will travel to Ohio and Pennsylvania to campaign for Democrat candidates there. At the event, Biden mentioned the Supreme Court’s decision to overturn Roe vs. Wade this summer.

He used that as a scare tactic spring board to tell the crowd that Republicans would move on from there to attempt to get rid of things like gay marriage and Obamacare.

The old tried and true, “Republicans are racist, sexist, bigoted homophobes who want dirty air and water, and don’t want your grandma to be able to afford her medication and starve” is also no doubt on the table as well.

The fear mongering from Biden continued, “This is not your father’s Republican Party. This is a different deal. Our team has to show up and quite frankly vote, just simply vote.”

Nice try, Joe. We all remember him claiming that “your father’s Republican Party” was going to put black people “back in chains.”

Democrats have an uphill battle before them. Staring them in the face is the fact that Americans are dealing with 40-year high inflation, soaring gas and food prices, and record crime rates.

So Biden, Vice President Kamala Harris, and others will be traveling across the country to campaign on what they see as “wins” for Joe Biden. The Inflation Reduction Act, which most have indicated will do little or nothing to curb inflation, is being pushed as “historic” global warming spending.

And now, added to that will be student loan forgiveness, which will chop off at least $10,000 of debt to those who qualify for it. Biden administration has also extended once again the COVID student loan repayment pause until Dec. 31.

Democrats Stuck With Joe On The Campaign Trail

Democrats campaigning may be stuck with Joe Biden tagging along whether they want him or not. Many who are in tight races are distancing themselves from Joe Biden.

Fearing they will take the heat for the pain Americans are feeling at the gas pump and the grocery store, many Democrat campaign ads are touting the candidate’s break with the party on things like gas taxes and defunding the police.

The ads however, are sending a mixed message. While the candidates are also talking about the fact they crossed the aisle to work with Republicans on different issues, a quick look at their voting records shows that many voted with Joe Biden and the rest of their party almost 90+% of the time.

As we wait for the “semi-fascist” T-shirts to be printed, Joe Biden’s comments beg a question. Polls show that roughly 70% of Americans think that the country is headed in the wrong direction. Are those the same Americans that have been deemed “fascists?”

The Big Guy has united this country again by calling a voter base semi-fascism. He will be remembered as the uniter who divided. If he wants to see a dictator, just look in the mirror. pic.twitter.com/7j08KaVp4h