GOP Rep. Marjorie Taylor Greene The Victim Of Second ‘Swatting’ Incident In As Many Days 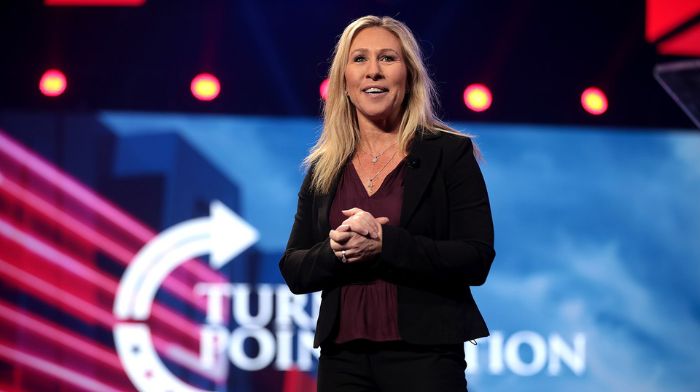 In what seems like a suspicious coincidence, Rep. Marjorie Taylor Greene (R-GA) was the victim of two apparent “swatting” incidents at her home in Rome, Georgia this week.

For those who don’t know what “swatting” is, it’s a bogus call to 911 designed to get heavily-armed SWAT teams to show up, thinking there is an immediate, violent danger that needs to be neutralized. Think of someone placing a phony hostage situation call.

Obviously, this is something that can have potentially deadly consequences.

I am pretty sure swatting a member of Congress is a federal crime. If the DOJ was fair and honest Merrick Garland would be publicly calling for justice for Marjorie Taylor Greene. BUT we live in Joe Biden’s America so Garland will remain silent. Sad and scary times!

The latest occurrence took place around 3 a.m Thursday morning. A 911 call came into the Rome, Georgia police department apparently originating from a suicide hotline from an internet chat, stating that a man was possibly planning to shoot his family and himself.

Details of the call stated that a man who “came out as transgender” and “claimed they shot the family.”

In the first incident, which took place around 1 a.m. Wednesday morning, there was a a report of “a subject being shot multiple times.”

Greene tweeted out that she “had been swatted again last night” on Thursday, but there were no other details given about the event.

The swatting call aimed at Marjorie Taylor Greene was made to a veterans crisis line.

A crisis line worker called 911 & said the suspect used text-to-speech to claim a man had been shot at Greene’s home.

RELATED: Airstrikes Reveal Forever War In Syria Despite ‘Withdrawal’ And Challenge Of Dealing With Iran

The Republican Democrats Love To Hate

Marjorie Taylor Greene is a favorite target for Democrats and the left. She has been vilified by mainstream media as racist, anti-semitic, Islamophobic, homophobic, and any other kind of “phobic” you can think of. She was banned on Twitter for what Twitter claimed was “spreading misinformation.”

She had been thrown off all of her congressional committees and was fined thousands of dollars for refusing to go along with Speaker of the House Nancy Pelosi’s House floor mask mandate. When she did wear a mask, it said, “TRUMP WON,” referring to the 2020 presidential election.

Greene has also been portrayed by the media as divisive among her fellow Republicans. She explains it this way: “because I don’t back down and I stand my ground.”

Swatting is an extremely dangerous trend that needs to be stomped out. @Timcast, @adinross, now @RepMTG. This really is terroristic activity.

Make it attempted murder and watch it stop.

There could be some possible motivation for the swatting at Marjorie Taylor Greene’s home, though this is speculation on my part. Greene recently introduced a bill that would make it illegal to provide transgender operations, including puberty blockers and hormones to anyone 18-years and younger.

Recall that at least the second swatting incident mentioned “transgender.”

During a recent appearance on “Tucker Carlson Tonight,” Greene explained the reason for the bill, “When it comes to ‘gender-affirming care,’ which is really child abuse, this is actually an assault and it’s child abuse. This practice should never happen. It’s so disgusting and appalling … this needs to be illegal.” Currently, the bill has 14 GOP cosponsors.

No word on any possible suspects in either swatting incident at Greene’s home.

‘That Was My Instinct’: Marjorie Taylor Greene Says She Grabbed Her Gun During ‘Swatting’ Incidenthttps://t.co/s0SNn5g5MJ