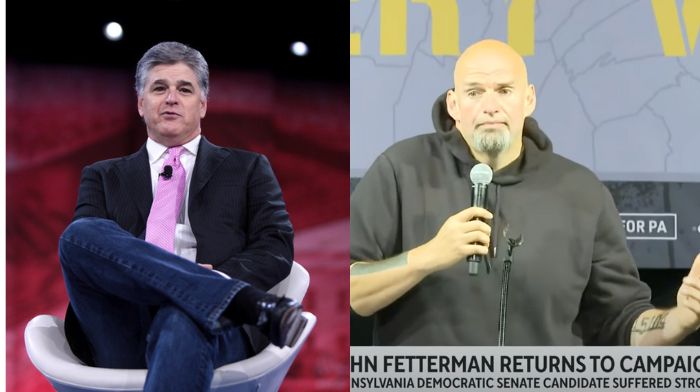 But a possible new entry into the ring has emerged: Democrat Pennsylvania Senate candidate John Fetterman.

Recently, Fetterman invoked Hannity’s name as a fundraising tool. Sean Hannity was having none of it, and challenged him to put his money where his mouth is.

There have been almost 350 murders in Philadelphia this year, and John Fetterman, who is currently PA’s lieutenant governor, wants to release 1/3 of prisoners.

On his show Monday night, Hannity challenged Fetterman to debate. He offered up an hour on TV and/or three hours on radio in an attempt to accommodate Fetterman.

But first, he responded to what appeared to be an email sent out to Fetterman’s supporters:

“I have a message tonight for the very lazy Bernie Sanders-loving socialist trust fund, baby brat in a hoodie that is now running as a Democrat for the Senate in Pennsylvania. Now he recently had a few choice words for yours truly, and he’s trying to raise money off of my name. Fetterman wrote, quote, “It brings me no pleasure to ask, but are you familiar with the host of a little show on Fox News named Sean Hannity?”

“Anyway, Fetterman then proceeded to complain about my interview with his Republican opponent, Dr. Mehmet Oz, and accused us of spreading B.S. lies. We don’t lie on the show. He then asked his supporters, Please chip in at least 25 bucks, 50 bucks, 100 bucks, because, quote, ‘We got to counter Sean Hannity with as much grassroots support as possible.’”

#Hannity Fetterman is a younger Biden

Sean Hannity was not through with John Fetterman just yet. It was here where Hannity invited Fetterman on TV and/or radio to debate the issues.

“Instead of accusing me of lying, which we didn’t do, John needs to quit his whining, stop his crying, man up, put on his hoodie, defend his radical opinions. And John, show me where you think I lied. Come on, Mr. Tough Guy. Come on the program. Let’s debate your positions. Bring your hoodie, bring your tattoos, bring your spoiled trust found brat crew with you, and come in my studio and debate me.”

But there’s more. Not only does he also support nationwide legalization of marijuana, he also supports heroin needle exchanges and safe heroin injection sites. Nowhere on the website will you see talk of low taxes, law and order, or a strong military.

Though you will see talk of cutting taxes in one of his campaign videos, where he claims “Washington is the problem.” It’s unclear if he knows Democrats control the White House, House, and Senate.

GOP Getting Shot In The Arm In PA

Currently, John Fetterman leads Dr. Mehmet Oz 47%-39%. But there may be help on the way. Senate Minority Leader Mitch McConnell’s Senate Leadership Fund PAC will be infusing another $9.5 million into this particular race, bringing the total to $34 million.

McConnell was on the hot seat after recent comments about “candidate quality.” Many thought the implication was that McConnell was unwilling to help Trump-endorsed candidates, which is not the case in Pennsylvania.

But if he wants to secure the majority in the Senate, McConnell cannot afford to be picky and will need much more than just an Oz win to help secure that.

Dr. Oz has signed on for five debates before election day. John Fetterman has not agreed to any debates so far.

Sean Hannity may be waiting along with Dr. Oz for any matchups with John Fetterman.

I don’t think anyone is fooled by radical Lurch #Fetterman. Career politician Lurch leeched off mommy and daddy until 49 and now wants to be in Congress.

He’d be too chicken s#$t to come on Hannity. #Socialist #Communist pic.twitter.com/GPCfZU05Bq