‘Compassionate’ Liberals Freak Out Over Busloads Of Illegal Immigrants Sent To Sanctuary Cities Like NYC, D.C. 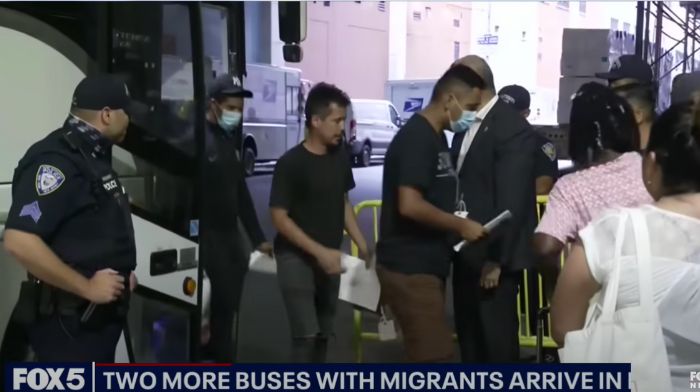 As the border crisis remains out of control, states like Texas and Arizona are being inundated with illegal immigrants.

Both Texas Gov. Greg Abbott and Arizona Gov. Doug Ducey have begun to send busloads of migrants to self-declared “sanctuary cities” like New York City and Washington D.C. in an effort to give those who encourage illegal immigration a taste of what their reckless policies have created.

Turns out being a sanctuary city is not all it’s cracked up to be, if the reactions of liberals are to be believed.

Texas Governor Greg Abbott, a Republican, said that he has started to send buses carrying migrants to New York City in an effort to push responsibility for border crossers to Democratic mayors and U.S. President Joe Biden pic.twitter.com/0gEuV7mnfo

Democrats are full of ‘compassion’ when the chaos on the border is confined to places like Texas and Arizona. But then something happened. Border state governors began to put migrants on buses and send them to sanctuary cities. Aren’t those the places who said they want to take in illegal immigrants?

Well, not so much. While New York City Mayor Eric Adams has changed his tune, along with DC Mayor Muriel Bowser. Who could have guessed?

Adams is now complaining about homeless shelters being strained to their limits and depending on volunteer groups and homeless hotel operators to furnish necessities like food, clothing, and shelter. He said, “I think that Gov. Abbott, what he’s doing is just so inhumane.”

Washington D.C. Mayor Muriel Bowser, who is dealing with roughly 4,000 illegal immigrants of her own, called the busloads coming to the nation’s capital “a humanitarian crisis,” and has written several letters to Secretary of Defense Lloyd Austin requesting National Guard troops.

These numbers are staggering. Keep this in mind when you see NYC or DC leaders complain about a crisis and need for federal support because of a few thousand migrants being bussed there. The rest of these migrants mostly stay in border states. https://t.co/ocxzsjkh8B

But it’s not just politicians. Rank-and-file liberals seem to have lost all their compassion, as well. Just take a look at any mainstream media report about Abbott’s bus strategy, and you can see what they really think about illegal immigration.

If you had not actually seen this stunning display of self-unawareness with your own eyes, you would never believe it.

Taking advantage of suffering and desperation — which political party is OK with that?

Then, the same people who booed God at their 2012 convention weighed in.

Greg decided helping his fellow man wasn’t the Christian thing to do.

The intellectuals also chimed in.

This is human trafficking.

Ok, now I am confused. Aren’t you already doing that by being a sanctuary city?

could r
this be considered “aiding and abbeting” illegals?

And then there was the example of why we should never question the “compassion” of the left.

If greg abbot was at the bottom of 10 flights of stairs and his chair at the top and he asked for help i would laugha nd tell him to get crawling. Bootstraps and all.

Of course, that’s just a small snippet. But like I said, check out the replies to any similar story.

I can’t imagine those living in border states have any compassion for the liberals now dealing with the same thing they deal with everyday.