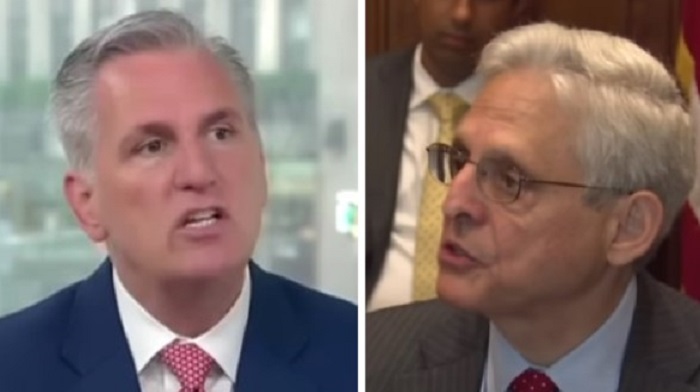 McCarthy (R-CA) views the raid of Trump’s home as a continuing trend of the weaponization of the Justice Department against political opponents.

And he suggested Garland prepare himself for what is to come following the midterm elections in which Republicans are widely expected to take back control of the House of Representatives.

“I’ve seen enough,” McCarthy said in a short statement. “The Department of Justice has reached an intolerable state of weaponized politicization. When Republicans take back the House, we will conduct immediate oversight of this department, follow the facts, and leave no stone unturned.”

He concluded, “Attorney General Garland, preserve your documents and clear your calendar.”

Kevin McCarthy’s statement underscores the widespread outrage amongst Republican lawmakers who view the FBI raid on Trump’s Mar-a-Lago home as the actions of a Third World dictatorship, not the world’s beacon of freedom.

“Using government power to persecute political opponents is something we have seen many times from 3rd world Marxist dictatorships,” he said. “But never before in America.”

But never before in America

“In third world countries and banana republics they prosecute the former presidents/leaders and their staff,” Rep. Thomas Massie (R-KY) tweeted. “Right now, we look beneath them. We are in a race to the bottom.”

In third world countries and banana republics they prosecute the former presidents/leaders and their staff. Right now, we look beneath them. We are in a race to the bottom.

Florida Governor Ron DeSantis echoed the “banana republic” sentiment and pointed out how the FBI had allegedly turned a blind eye to the criminal activity of President Biden’s son.

The raid of MAL is another escalation in the weaponization of federal agencies against the Regime’s political opponents, while people like Hunter Biden get treated with kid gloves. Now the Regime is getting another 87k IRS agents to wield against its adversaries? Banana Republic.

As The Political Insider reported, Senator Chuck Grassley recently claimed high-ranking FBI whistleblowers have accused the Bureau, along with the Department of Justice (DOJ), of suppressing negative information about Hunter Biden prior to the 2020 election, and subsequently shutting down investigations on the matter.

And of course, we know that classified materials in the home of one Hillary Clinton never led to an FBI raid. In fact, they exonerated her despite the evidence before them that she had such documents on her private server.

Words are cheap. Follow through or move aside. https://t.co/YbNBwA4U8W

This isn’t the first time Kevin McCarthy has reportedly looked into investigating the Biden DOJ and Attorney General Merrick Garland should Republicans regain control of the House following the midterms.

The Political Insider reported this past December that McCarthy “plans to beef up staff, counsel and other resources to be ready to extract information beginning Day 1 if the GOP gets the gavel” regarding several investigative paths.

One of those avenues could involve the White House and Garland’s DOJ working in tandem with the National School Boards Association (NSBA) to treat parents concerned about their children’s education like domestic terrorists.

A letter sent on September 29th by the NSBA and coordinated with the White House and DOJ requested an investigation into whether or not confrontations from outraged parents regarding mask mandates or Critical Race Theory (CRT) curricula amounted to a violation of the Patriot Act.

The group suggested that “the classification of these heinous actions could be the equivalent to a form of domestic terrorism and hate crimes.”

The NSBA reportedly had even sought military intervention at school board meetings.

House Minority Leader Kevin McCarthy is not only preparing to turn the tables on the majority in the 2022 midterm elections, but he is also beefing up efforts for subsequent retribution for Democrats hunting down Trump admin. officials in investigations. https://t.co/dpjmYjc1dr pic.twitter.com/b6V7W6gmBs

We’re also well aware of the FBI’s role in helping to foment the Russia collusion hoax. The bureau needs to be completely dismantled and rebuilt from the ground up.

None of this will matter unless McCarthy follows through on his threat to investigate Garland. We are witnessing some of the most radically politicized abuses of power by the DOJ in this nation’s history.

McCarthy and the Republicans that gain power in the House better act as if that’s what they’re dealing with.