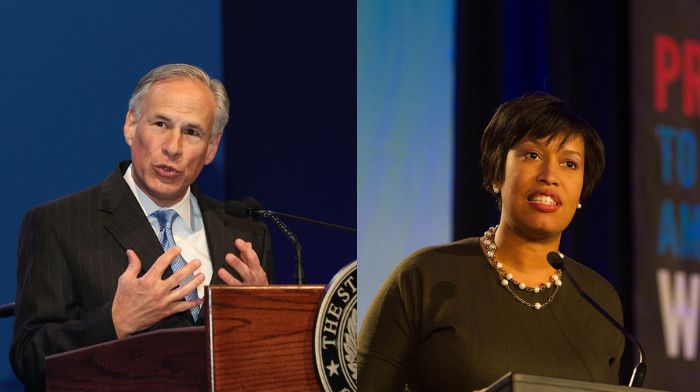 Texas Gov. Greg Abbott has gotten the attention of at least one person in Washington, D.C. about the crisis at the U.S. southern border: D.C. Mayor Muriel Bowser.

Abbott stated on Thursday that he will continue to send busloads of illegal immigrants from Texas to the nation’s capitol.

Bowser, who only sees what she calls a “humanitarian crisis” when it is in her city, has called for National Guard troops to assist after just 4,000 have arrived in Washington.

DC mayor request National guard over migrant buses. So it’s all right to bus these migrants to cities all around the country as long as it’s not in DC.

Back in April, both Abbott and Arizona Gov. Doug Ducey declared they would be sending those coming across the border illegally, ostensibly seeking asylum in the U.S., on buses to Washington D.C. in response to President Joe Biden’s immigration policy. Since that time, Texas has bussed approximately 5,000 migrants, Arizona has bussed around 1,000.

At the time, Sen. Ted Cruz said of Abbott’s response, “Hopefully this gets liberal elites and the Biden administration to actually care about the millions of illegal aliens who are streaming across our southern border.”

Rep. James Comer (R-KY) said, “They’re going to see, with all these people invading Washington, D.C., like they’ve invaded our border states, and it may make them realize how bad it is.”

Indeed, it seems they have seen.

Jean-Pierre: “Republicans are using migrants as a political tool.”

Doocy: “So the White House’s preference would be for small towns in Texas and Arizona to take care of these migrants and not DC.”

Jean-Pierre: “They are sending migrants to big cities as a political ploy.” pic.twitter.com/JGXkkzn79a

Mayor Bowser has sent two letters to Secretary of Defense Lloyd Austin requesting assistance from the National Guard. In one, she blamed Texas and Arizona for the situation in Washington, saying, “The migrant crisis facing our city and our country through cruel political gamesmanship from the Governors of Texas and Arizona must be dealt with at the federal level.”

Upon hearing Mayor Bowser, who has prided the nation’s capital on being a “sanctuary city,” now bemoan the fact that Washington D.C. is being inundated with migrants, Gov. Abbott issued a statement:

“Washington, D.C. finally understands what Texans have been dealing with every single day, as our communities are overrun and overwhelmed by thousands of illegal immigrants thanks to President Biden’s open border policies. If the mayor wants a solution to this crisis, she should call on President Biden to take immediate action to secure the border—something he has failed to do.

“The true ongoing humanitarian crisis is along our southern border. The Biden Administration is allowing historic levels of illegal immigrants, weapons, and deadly drugs like fentanyl to surge into our state.

“Texas continues stepping up to respond to this crisis by deploying Texas National Guard soldiers and DPS troopers, building our own border wall, busing migrants to our nation’s capital, and now sending illegal immigrants back to the border.”

Bowser’s irony and stunning lack of self-unawareness continued. Last weekend during an appearance on CBS’ “Face the Nation,” Bowser said that, “…I fear that they’re being tricked into nationwide bus trips when their final destinations are places all over the United States of America.”

The best part? D.C. taxpayers should not have to foot the bill for illegal immigrants coming to Washington. Bowser stated,

“Local taxpayers are not picking up the tab. They should not pick up the tab. We really need a coordinated federal response. We know that it’s done for refugees who come to the states from all points of the world and the same has to be done in the situation.”

Mayor Bowser in DC wants the National Guard called up because she can’t handle the trickle of migrants while the border states have them coming in like a fire hose. 🤦‍♂️ Hmmmm…I thought she didn’t like the National Guard, like on January 6? 🤔

Joe Biden’s immigration policies have turned the border into such a disaster, several Texas counties have declared an invasion.

Stuart Knowlton is the Atascosa County commissioner. He stated, “The governor under the constitution has the right to declare an invasion. He’s publicly stated on Fox News that he agrees there’s an invasion but he’s yet to sign a declaration, which would hand him the power to close the border.”

If Muriel Bowser complains loudly enough to the right people, will the busloads of immigrants being dropped off in her city be taken somewhere else? Red states perhaps? Time will tell. For now, it is just the latest on the Democrat list of “ok for thee but not for me.”

They don’t call it flyover country for nothing.