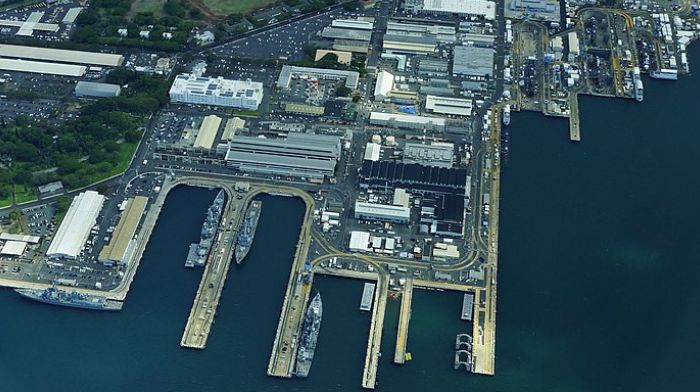 Besides the inconvenience and expense to the Navy to relocate all those families into hotels, the most alarming impact is the over 6,000 individuals suffering illness from drinking water contaminated with jet fuel.

The recently released video and photos raise more questions on the Navy’s response or lack thereof, accountability measures, and more far-reaching effects on defense in the Pacific region.

Watching fuel flooding a tunnel that is 380 ft from the drinking water source took my breath away… pic.twitter.com/upbQNZ5I18

A Disturbing Timeline Of Events

On November 29, the Joint Base Pearl Harbor-Hickam installation commander Navy Captain Erik Spitzer assured everyone that the water was safe to drink, stating:

“I can tell you at this point that there are no immediate indications that the water is not safe.”

The next day Captain Spitzer reiterated the claim that the water was safe even though the Hawaiian Department of Health warned that “All Navy water system users avoid using the water for drinking, cooking, or oral hygiene.”

In 2021, a major leak from the Red Hill Fuel Facility poisoned thousands of people on Navy water lines.

Another major leak could make our water permanently undrinkable. pic.twitter.com/9wIRhc4Uoj

However, on December 6, Captain Spitzer sent a notice to the military housing residents that the Navy had “mistakenly felt the initial tests meant we may drink the water.”

So 17 days passed from the time of the leak to the final announcement from the Navy that the water wasn’t safe.

Military members and their families started to experience various illnesses, including the following:

These illnesses were also experienced by many of the children of the military families stationed at the Joint Base. Many military families rely on the on-base child development centers, known as daycare centers, to watch after their children while working.

400,000 residents have been impacted by Navy contamination of Oʻahu’s drinking water—half a million people. DOD committed to defueling Red Hill Bulk Fuel Storage Facility, but the US military has yet to remove the fuel. And there are reports fuel may continue to be leaking. https://t.co/FCMnhADtYz

Ford Island Child Development Center, which is the largest daycare center on the Hawaiian installation, had sent conflicting messages to families throughout the crisis. A release to the base population on measures to protect the children from contaminated water wasn’t sent out until December 21.

“I mean to be honest, will these parents ever know how this has impacted their kids and their immunological or developmental growth? I mean, I don’t think so.”

The fuel leak in November is believed to have happened due to an earlier spill in May. During the May incident, 20,000 gallons of jet fuel got caught in the fire suppression system in the storage facility.

A Naval investigation uncovered that the issue was probably predestined due to an error in construction work in 2015. Steel pipe was meant to be put into the suppression system, but instead, PVC pipe was utilized, which is not as sturdy and would break down over time when in contact with fuel.

“The lack of critical thinking, intellectual rigor and self-assessment by key leaders at decisive moments exemplified a culture of complacency and demonstrated a lack of professionalism that is demanded by the high consequence nature of fuel operations.”

While a fair amount of individuals within the chain of command hold responsibility over operations on an installation, to use an old leadership term, the buck stops at the top. The report specifically spoke of Captain Spitzer’s actions, stating:

“He did not exercise his unique authority and that inaction contributed to contamination of the drinking water because the response was neither comprehensive nor effective.”

So what became of Captain Spitzer? He retired in June, receiving the second-highest non-combat service award you can receive; the Legion of Merit.

The citation lauded his “response to the Red Hill water contamination incident, which resulted in the expeditious restoration of clean water throughout the community.”

What in the hell would possess the people overseeing the people who lead this installation to give Erik Spitzer a LOM after his disastrous and unethical leadership of JBPHH during the US Navy’s contamination of the drinking water?

RELATED: The Truth Behind Military Brass Incompetence And The System That Perpetuates It

The reality is warnings have been raised about the Red Hill Fuel Storage Facility for a long time. The Sierra Club estimates that over 180,000 gallons of fuel have spilled out into the environment and water supply over the entire lifespan of the tanks initially constructed during World War II.

If that wasn’t enough, the Navy has documentation highlighting the facility’s significant risk to the environment and surrounding community. For example, a Naval report indicated that every year there is a 28% chance of a substantial spill which equates to between 10,000 and 30,000 gallons of jet fuel.

We must treat the Red Hill fuel storage leak with the urgency it deserves & work to protect our precious aquifers.https://t.co/KG2oPpOZeK

The Pentagon has finally agreed to shut down the facility, which poses even more questions and concerns. In addition, the delay in dealing with this fuel infrastructure weakness poses a significant security concern.

Joint Base Pearl Harbor-Hickam is the heartbeat of U.S. military operations in the Pacific region. Fuel is the blood that must be pumped into the military machine to operate with maximum lethality and efficiency.

With it estimated to take over a year to empty the Red Hill tanks and no solid plan to reposition fuel assets in the region, there is a legitimate concern regarding our defensive posture.

How Many More Warnings Will It Take?

Last month Deputy Assistant Secretary for the Air Force for Acquisitions Major General Cameron Holt warned that our procurement systems are far behind China and pose a significant threat to our security.

“In purchasing power parity, they spend about one dollar to our 20 dollars to get to the same capability. We are going to lose if we can’t figure out how to drop the cost and increase the speed in our defense supply chains.”

With World War II-era infrastructures like the one on Oahu and spread throughout our international installations, we could quickly find ourselves not just technologically behind China when it comes to our weapons systems but not even able to put up a fight while we desperately try to plug holes in our aging infrastructure.

“They have a larger Navy than we do, and they are making great strides in their military capabilities to keep us out of the Pacific region.”

We might take ourselves out of the Pacific region without China’s help at this rate.