Watch: Pete Buttigieg Defends Husband for Mocking Brett Kavanaugh After He Was Forced by Protesters to Flee Restaurant 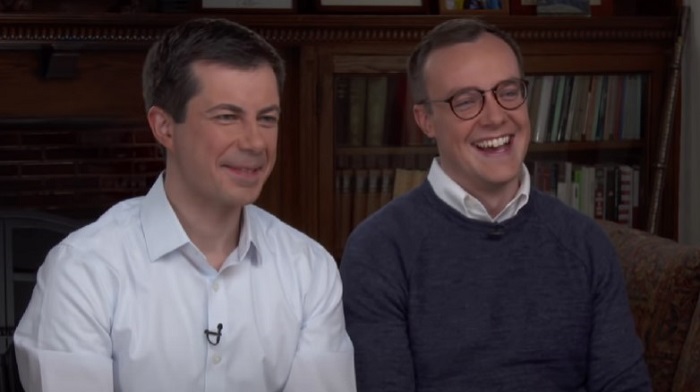 Transportation Secretary Pete Buttigieg defended protesters who forced Brett Kavanaugh to flee a restaurant out the back door, along with comments by his husband, Chasten, who mocked the Supreme Court Justice over the incident.

Kavanaugh, it should be noted, was the victim of an alleged assassination attempt just one month ago.

Politico reported that pro-abortion protesters had learned that the Justice was dining at Morton’s Steakhouse in Washington, D.C. last week where they swarmed the entrance and “called the manager to tell him to kick Kavanaugh out.”

The group boasted that they had forced him to exit through the back of the building.

We hear Kavanaugh snuck out the back with his security detail. @mortons should be ashamed for welcoming a man who so clearly hates women.

Several leftists mocked Justice Kavanaugh over the incident, despite the recent history involving an attempt against his life and the numerous attacks on pro-life centers across the country.

Among those who found the situation amusing was Chasten, Pete Buttigieg’s husband.

“Sounds like he just wanted some privacy to make his own dining decisions,” he sarcastically tweeted, an obvious reference to the Supreme Court overturning Roe v. Wade.

The former presidential candidate stood by his husband as well as the protesters for engaging Kavanaugh in a public setting.

Pete Buttigieg was confronted by Fox News’ host Mike Emanuel during a weekend interview in which he asked if Chasten’s comments were “appropriate.”

Buttigieg responded by saying everyone has a right to protest, insinuated that Kavanaugh should expect such behavior as a public figure, and seemed to gloss over his husband’s comments.

“When public officials go into public life we should expect two things. One, you should always be free from violence, harassment and intimidation,” he said.

“And two, you’re never going to be free from criticism or peaceful protests, people exercising their First Amendment rights.”

Buttigieg also downplayed the entire incident because “the justice never even came into contact with these protesters” and “reportedly didn’t see or hear them.”

Kavanaugh never came in contact with the man who is accused of trying to assassinate him either, but that doesn’t mean the threat of violence wasn’t there.

Buttigieg went on to justify the actions of those who had forced Kavanaugh to quietly escape a restaurant through the back door because they are “upset.”

Pete Buttigieg justifies Brett Kavanaugh having to leave a steakhouse after leftist activists descended on the restaurant because “these protesters are upset because a right … that a majority of Americans support was taken away.” pic.twitter.com/qEDXDo5Uul

“These protesters are upset because a right, an important right that the majority of Americans support, was taken away,” said Buttigieg. “Not only the right to choose, by the way, but this justice was part of the process to stripping away the right to privacy.”

If the same was done to Kentaji by MAGA hatted Trumpers, they’d be arrested and shipped to GITMO

Can you just imagine how the left and the media would react if a group of conservatives went and protested Buttigieg and his husband Chasten as they dined at a restaurant over the many failures of his tenure at the Department of Transportation? It would be on the front page of every paper.

Buttigieg has been behind the supply chain issues plaguing America for the better part of President Biden’s tenure and has been a consistent source of mockery as he focuses his efforts on paternity leave, free pre-school, and racist roads.

But if anybody dared protest him or harass him in public, they’d be branded as violent homophobes.

Buttigieg, though, says he’d be fine with such protests against him and his husband and claimed they have already been the target of such demonstrations.

“Protesting peacefully outside in a public space? Sure,” he replied when asked about such a scenario.

“Look, I can’t even tell you the number of spaces, venues, and scenarios where I’ve been protested.”