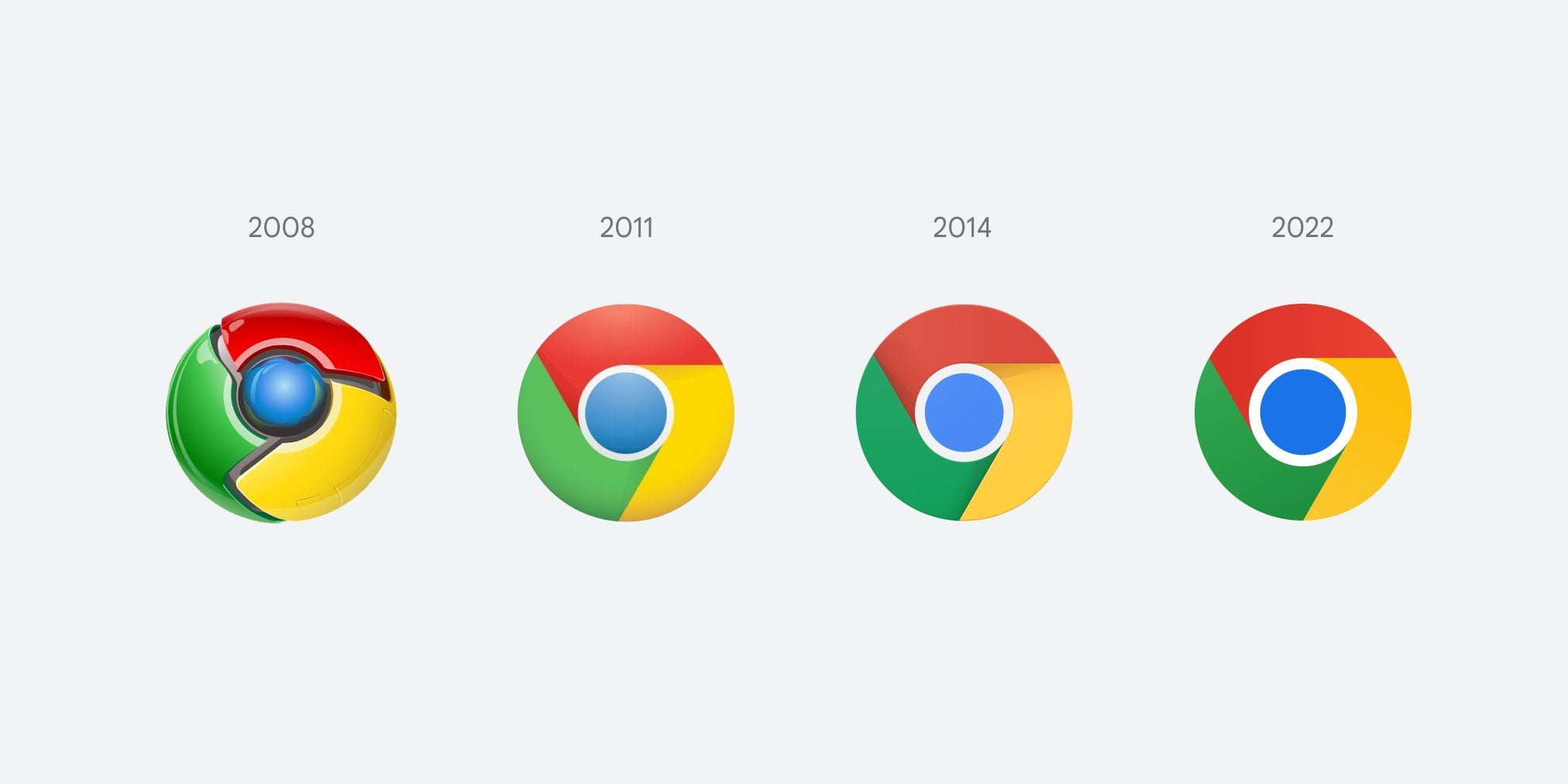 Google Chrome has the legacy of the consistent and same iconic logo since 2014. Throughout the period, the Chrome logo was changed but the central idea remained the same, i.e., a colorful circle divided into four parts. Red, blue, green, and yellow are the iconic colors that, despite many changes, remained the same. It is one of the most famous web browsers which was launched in 2008. Back then, the logo was three-dimensional, with a circle divided into four colorful parts: blue, red, green, and yellow.

The color composition and unique shadows at the boundaries of the Chrome logo have changed now. We confirmed it from the Twitter threads of a Google Chrome designer, Elvin Hu. He has even confessed that distinguishing between different Chrome logo versions is a daunting task for the naked eye. So, for the convenience of the viewers, he has placed all the previous Chrome logo versions along with a few explanations. The changes are so subtle, professional, and enthralling that making an accurate guess is difficult for a common person. We will make it easy to understand the changes made in Chrome in this news article.

Why has the Chrome Logo changed now?

Why has Google Chrome changed its logo now? It was the same 2D flat logo with distinctive color variation since 2014. The iconic features of the logo are the legacy and symbol of Chrome. Even now the changes are subtle, then why are these minute changes in shades, colors, and sizes now?

Because the technology is developing, consumer behavior is changing and making them more interested in the priority of any business. Adopting a simpler version of the chrome to match the current brand is the major goal, according to Elvin Hu, a chrome designer.

A brief comparison of Chrome logos

Google Chrome is a symbol of speed, dynamism, and modernism. The first logo of chrome featured from 2008 to 2011 was a three-dimensional rounded figure. They composed it of three segments with the spherical circle at the center. The sides were cut diagonally, giving a sense of speed. They divided the segments into red, green, and yellow colors while the blue sphere was at the center.

They changed the 3D Chrome logo in 2011 and the 2D flat logo took the place of a 3D Chrome logo. The color distribution remained the same, i.e., red, yellow, green, and blue at the center. However, the blue color at the center resembled a globe to give a sense of the versatility of the Chrome browser.

Google Chrome made the 2011 logo version simple, flat, and less stylistic as compared to the 3D logo of 2008. But it’s surprising and interesting to know that in 2014 they made the Chrome logo even more stable, creative, and simple. They replaced the gradient blue circle at the center with a light blue one. The gray outline of the blue central circle changed to white and made it a little wide. It subtly changed the diagonally cut three segments around the blue central circle.

The 2014 Chrome logo is not the same for all systems. The subtle changes are enthusiastic and charming. Windows 10 and 11 have colorful and stunning colors. To make a perfect synchronization with the surrounding apps, the Chrome logo would appear with a more dramatic gradient. Similarly, on macOS, Chrome would appear with little shadow. While on ChromeOS it will look more shining and colorful to make a perfect blend.

An updated version of the Chrome Logo

In a series of Twitter posts, Elvin Hu has made comparisons of the updated Chrome logo with the previous versions. The changes in Google Chrome are unique and make it more creative as compared to the earlier versions. You can see the latest changes in Chrome Canary. Updated Chrome logo will be available within a few months on other Chrome browsers.

Chrome has the potential to entice more users with the latest changes in its logo. Currently, the Chrome web browser dominates 63% of web usage. If Google will allow the changes in the logo, it can have a huge disincentive for its market share.

Google is making some changes in the 2014 Chrome logo to make it more at home on Windows, macOS, and iOS. “We want the icons to feel recognizably Chrome, but also well crafted for each OS,” Chrome designer Elvin Hu said in a tweet post.

Since 2008, the Chrome logo is getting simpler. It was a 3D logo with a stunning colorful scheme symbolizing speed and dynamism. Now Elvin Hu has reduced it to a simple 2D Chrome logo with the same color scheme: red, green, yellow, and central blue. The shades are reduced and they make the central blue circle bigger, piercing through the hearts. 2022 is the year of experiencing a new logo design of Chrome.