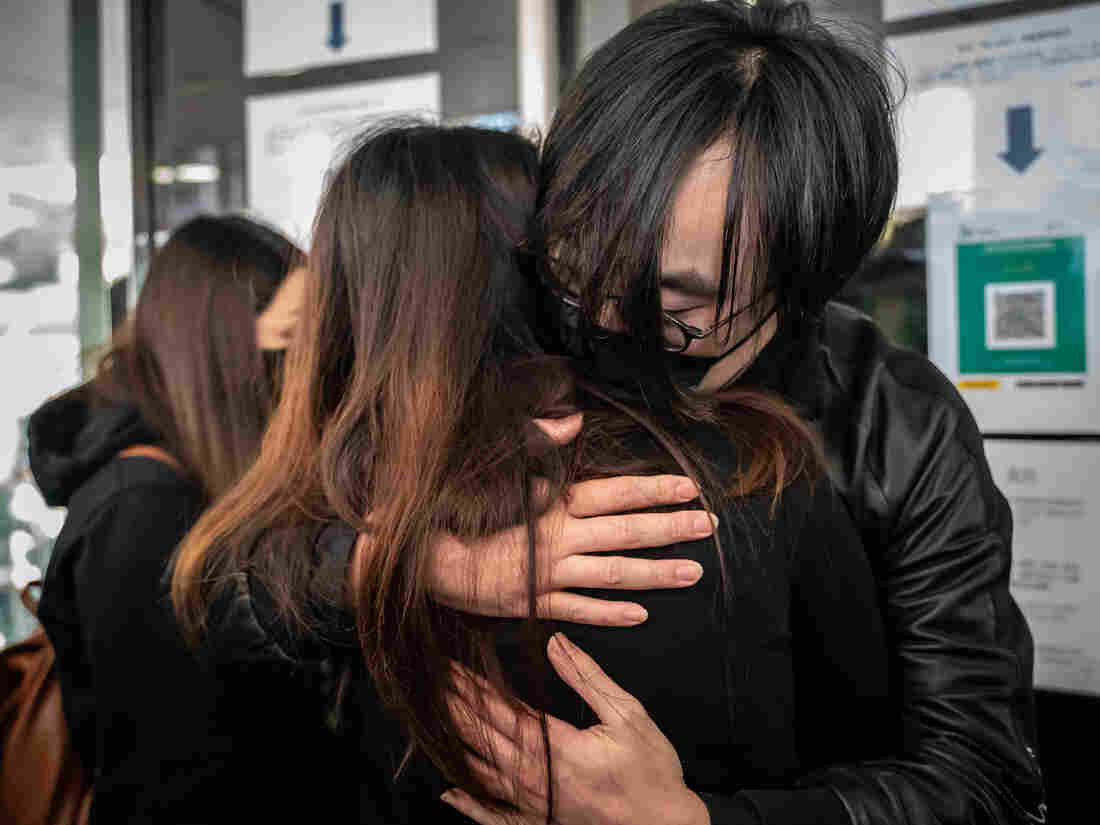 Mike Lam King-nam, who participated in the 2020 pro-democracy primary elections, gives a hug to his wife ahead of reporting to police on Sunday in Hong Kong. Anthony Kwan/Getty Images hide caption

Mike Lam King-nam, who participated in the 2020 pro-democracy primary elections, gives a hug to his wife ahead of reporting to police on Sunday in Hong Kong.

The activists were among a group of more than 50 people arrested in January for organizing and taking part in a primary election last July. The mass arrests last month were the most extensive roundup since the law was introduced last summer.

The law criminalizes four types of activity: secession, subversion of state power, terrorism and collusion with foreign entities. In practice, it ends whatever autonomy that Hong Kong had previously enjoyed under Chinese rule.

Those arrested were among Hong Kong’s most vocal democracy advocates, a group that includes many opposition lawmakers. The group of 39 men and eight women had been asked to check in with police on Sunday in preparation for a court appearance Monday morning. If convicted, they could face life in prison.

Activist Joshua Wong, who is currently serving more than a year in prison for organizing a protest, was also charged.

International observers have expressed concern that China is going to great lengths to stamp out opposition. In a statement, the European Union Office to Hong Kong and Macao said the charges “make clear that legitimate political pluralism will no longer be tolerated” there.

U.S. national security adviser Jake Sullivan wrote that the detentions underscore China’s “broken promises to the world about Hong Kong’s autonomy & democratic rights. We stand in solidarity with these brave activists.” U.K. foreign secretary Dominic Raab said the charges were “deeply disturbing” and that the national security law is “being used to eliminate political dissent rather than restore order – contrary to what the Chinese Government promised.”

In the days leading up to Sunday’s charges, the activists said goodbye to loved ones, and made peace with their fate. As they entered the police station, many gave statements to the media.

“Democracy is never a gift from heaven. It must be earned by many with strong will,” said 33-year-old Jimmy Sham, the BBC reported. Sham, of the Civil Human Rights Front, helped organize major protests in 2019. “We will remain strong and fight for what we want.”