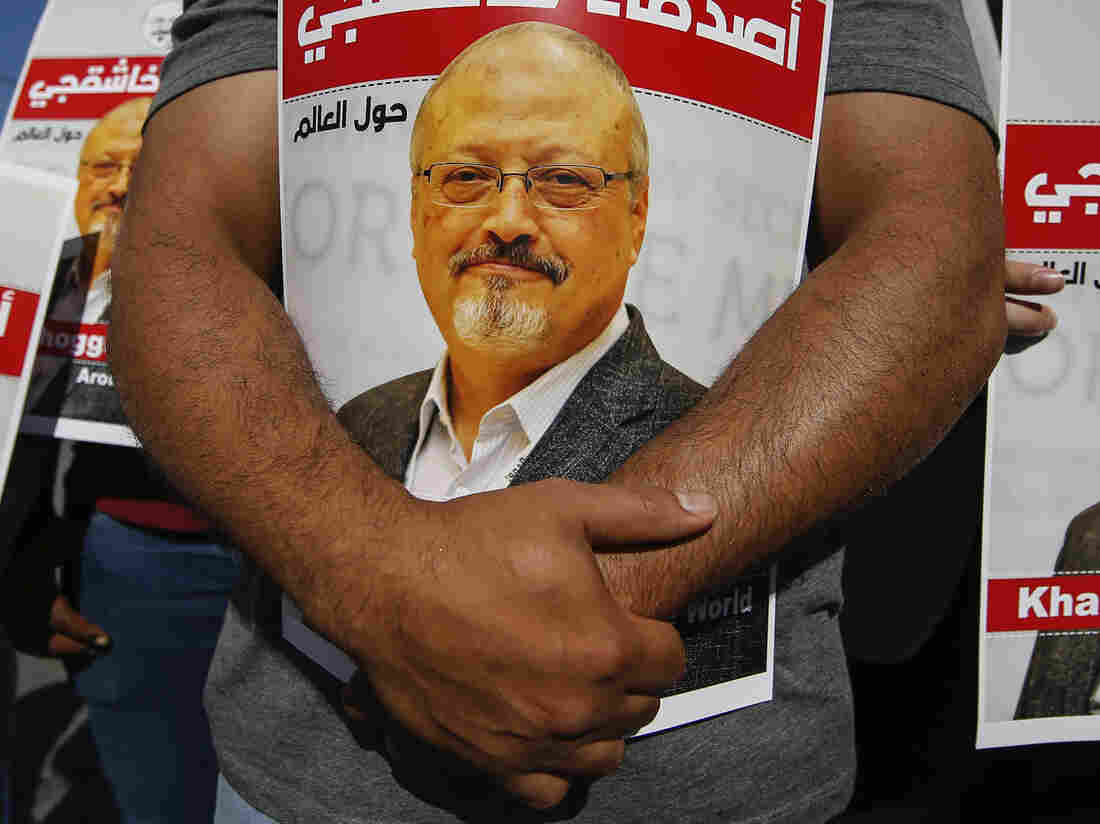 Lawmakers and journalists are among those calling for penalties against Saudi Crown Prince Mohammed bin Salman for the 2018 killing of Washington Post columnist Jamal Khashoggi after a U.S. intelligence report finding the crown prince had approved the operation. Emrah Gurel/AP hide caption

Lawmakers and journalists are among those calling for penalties against Saudi Crown Prince Mohammed bin Salman for the 2018 killing of Washington Post columnist Jamal Khashoggi after a U.S. intelligence report finding the crown prince had approved the operation.

The release of a U.S. intelligence report finding that Saudi Arabia’s crown prince had approved the 2018 killing of Washington Post columnist Jamal Khashoggi is prompting calls for penalties against the man next in line to the Saudi throne.

The report, released Friday, found that Crown Prince Mohammed bin Salman — whose involvement was widely suspected — had approved the operation to kill Khashoggi at the country’s consulate in Istanbul, Turkey.

The day of the report’s release, the U.S. State department also issued a visa ban for 76 Saudis. But so far no direct penalties for Salman have been announced.

Adam Schiff, D-Calif., who chairs the House Intelligence Committee, tweeted on Friday that Biden should “ensure that repercussions for the brutal murder of Khashoggi go beyond those who carried it out, to the one who ordered it.”

“The Crown Prince has blood on his hands. The blood of an American resident and journalist. We must have accountability,” Schiff wrote. He also told CNN that Biden should “shun” the crown prince.

Sen. Robert Menendez, D-N.J., who chairs the Senate Foreign Relations committee, called the report an “appropriate first step” but said he hoped for “concrete measures” against Salman “for his role in this heinous crime.”

“The United States must send a clear signal to our allies and adversaries alike that fundamental values, including respect for basic human rights and human dignity, drive U.S. foreign policy,” Menendez said in statement.

Similarly, Senate Intelligence Committee Chairman Mark Warner, D-Va., said he was “encouraged to see the new administration taking steps” toward accountability for the death of Khashoggi, who was a Virginia resident.

On the Republican side, House Foreign Affairs Committee ranking member Michael McCaul of Texas said the U.S. “must ensure everyone involved in this appalling crime is held accountable – including Crown Prince Mohammed bin Salman, whose role in this murder has now been publicly affirmed.”

Though not officially the king, Mohammed bin Salman is considered Saudi Arabia’s de facto ruler and controls the kingdom’s intelligence and security services.

In an interview with Univision on Friday, Biden said he had spoken King Salman Thursday and made it clear that “the rules are changing.” Biden said changes to the relationship would be announced Monday.

But the absence of any concrete penalties for the crown prince so far has engendered rebukes from Khashoggi’s colleagues and friends in journalism.

An editorial from The Washington Post applauds several of Biden’s actions to reset the intensely cozy relationship Saudi Arabia enjoyed with Trump. The editorial goes on to suggest that under Biden, the U.S.-Saudi relationship may resemble what it did before Trump, “when the kingdom was treated as a prime U.S. ally in the Middle East.” The editorial cites continued weapons sales to Saudi Arabia and a recent call between Salman and Defense Secretary Lloyd Austin.

“Mr. Biden is nevertheless granting what amounts to a pass to a ruler who has sown instability around the Middle East in recent years while presiding over the most severe repression of dissent in modern Saudi history,” the Post editorial board writes.

The Post noted that under U.S. law, Salman should be banned from traveling to the U.S. and have his assets frozen.

The Society of Professional Journalists called the intelligence report “too little too late,” adding that “the crown prince should have already been held accountable.” The group said Biden should send the message “that the killing of a journalist is unacceptable anywhere on this planet.”

New York Times writer Nicholas Kristof, a friend of Khashoggi, minced no words in his column, calling Salman a murderer and saying Biden appeared “ready to let the murderer walk.”

The Saudi government has rejected the findings of the U.S. intelligence report.