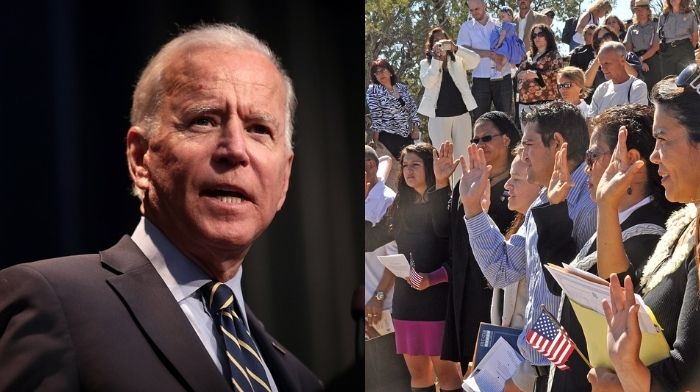 In yet another attempt to erase the Donald Trump years, the Joe Biden administration has decided to go back to an old version of the U.S. Citizenship test.

The current test, which was implemented by the Trump administration, has been criticized by some for not giving enough notice before the new test had been implemented.

A report from Newsmax stated that some of the complaints were that there was not enough time to study and preparation of training materials and resources. Another complaint was that for many of the questions, there was only one acceptable answer according to the study guide.

Homeland Security announced it is canceling the use of the new citizenship test the Trump administration developed and will go back to the test created in the Bush years.https://t.co/Hi2bXOz395

A New York Post report describes a few of the things that the U.S. Citizenship and Immigration Services says will be different between the new test and the one implemented by Trump:

The test will consist of just ten questions, different from the current twenty questions. Applicants must pass at least 60% of the questions and pass a proficiency in English test.

Under the Trump test, there was a list of 128 questions that each test was able to draw questions from. That number now goes down to 100.

Applicants may also be asked about the functions of various offices within the federal government, such as Representatives and Senators, and the significance of the founding documents.

How Hard Should It Be To Become A Citizen?

The New York Post report went on to give a few examples of test questions that the Biden administration has deleted from the list of possible test questions, saying “the words ‘Life, Liberty, and the pursuit of Happiness’ are in what founding document? The only correct answer is the Declaration of Independence.”

Another is, “what founding document said the American colonies were free from Britain?” One more question removed from the list is, “Name one document that influenced the U.S. Constitution?”

The answers included for this question in the study guide were acceptable were the Mayflower Compact and the Declaration of Independence.

Immigration By The Numbers: Who is Taking The Test?

According to a report from “AZ Central,” the USCIS currently has a backlog of 942,000 citizenship applications. As of 2019, the Department of Homeland Security stated that there are 13.6 million permanent residents in the U.S. Of those, 9.2 million qualify for naturalization.

The new policy states that anyone who has applied for citizenship since December 1, 2020, and has an interview scheduled prior to April 19, 2021, has the option to take either the 2020 test which they would have been studying for, or the 2008 version of the test.

The Newsmax report also stated that there were many criticisms of the Trump administration test because of what was seen as “alleged conservative bias.” The bias was determined because there were five questions on the Federalist Papers, and only two about the Civil Rights movement.