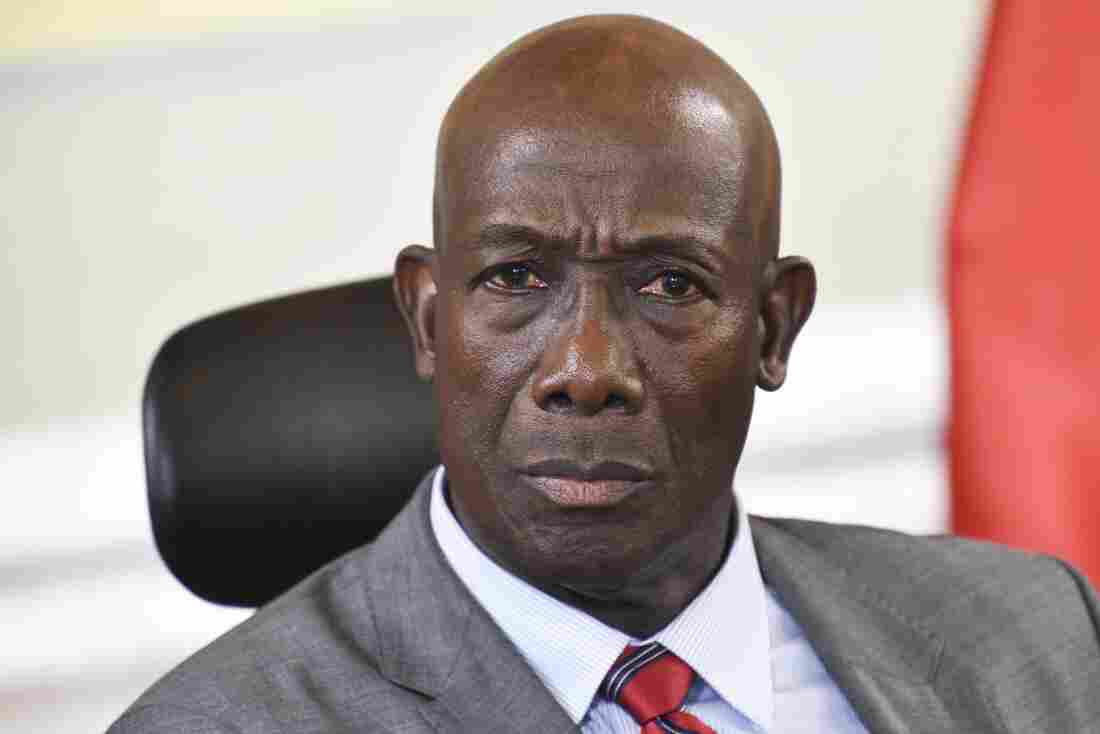 Keith Rowley, the prime minister of Trinidad and Tobago, has called for global vaccine distribution based on models of “sharing and caring” that provide equitable access to small countries like his and “benefit of all humankind and not just the privileged, well-heeled few.” Carlos Becerra/Anadolu Agency/Getty Images hide caption

Keith Rowley, the prime minister of Trinidad and Tobago, has called for global vaccine distribution based on models of “sharing and caring” that provide equitable access to small countries like his and “benefit of all humankind and not just the privileged, well-heeled few.”

The Prime Minister of Trinidad and Tobago, Keith Rowley, is not happy about how the global rollout of COVID vaccines is going. He’s not happy at all.

“We are more than a little bit concerned that there is … or is to be … hoarding and price gouging,” of vaccines, the Prime Minister said in a press conference on Thursday with the head of the World Health Organization.

He knows all too well how problematic acquiring vaccines is right now.

While nearly 60 million doses of COVID vaccine have been administered in the United States, most nations in the world haven’t vaccinated hardly anyone. Trinidad and Tobago finally immunized its first front-line worker on Wednesday — but it was only possible because the government of India donated 2,000 doses to the island nation.

In an ideal world, the price of a vial of vaccine would be consistent across the globe.

But at this stage of the vaccine rollout, it’s difficult to find out basic facts – like, how much a vial costs. Companies are keeping exact prices a secret.

To bring more transparency, UNICEF has compiled a chart of how much countries and nonprofit groups are paying for doses, drawing from local news reports, reporting by Reuters and documents obtained from various sources.

There’s a significant range in price because some vaccines are more expensive to produce than others.

But even for the very same vaccine – the AstraZeneca vaccine touted as one of the most affordable in the world – there are notable differences.

The company is not disclosing the exact price it is charging even though CEO Pascal Soriot has repeatedly committed to make it broadly available “at no profit during the pandemic.”

This has led to reports of wildly different prices being paid by governments in different parts of the world. And instances of poorer nations paying significantly more than rich nations for exactly the same product.

South Africa is reportedly paying $5.25 a dose for a version of the vaccine manufactured in India while a poorly redacted version of the contract between AstraZeneca and the European Commission shows Europeans paying only $3.50 per shot. Uganda seems to have gotten an even worse deal paying $8.50 a dose according to Reuters and government officials quoted in Health Policy Watch. Even if the difference in price is just a few dollars a dose, multiply that by millions of doses needed and the impact can be huge.

According to the available data, the cost of some other vaccines varies even more wildly. Reported prices for the inoculation from the Chinese government-backed company Sinopharm varies even more dramatically. They range from$18.50 per shot in Senegal to $44 inside China to up to $72.50 a dose. That for a vaccine that still hasn’t won authorization from any major regulator outside of China.

Manuel Martin with the Doctors Without Borders Access campaign says smaller nations are at a disadvantage in negotiations with pharmaceutical companies for vaccines.

A global initiative called COVAX run by the World Health Organization, GAVI and the Coalition for Epidemic Preparedness Innovations is trying to bring equitable access to vaccines around the globe, providing free or reduced-cost vaccines to nations in need.

But even COVAX isn’t disclosing exactly how much it’s paying for each vaccine. “In terms of the individual agreements with manufacturers, that is proprietary information and not something that we’re planning on sharing, given the nature of those types of commercial and legal agreements,” said Seth Berkley, the head of GAVI, the Vaccine Alliance in a call with reporters in December.

And while it appears to be close to starting deliveries so far it hasn’t administered a single dose.

Even middle income countries that hosted clinical trials for vaccine manufacturers are finding it difficult to negotiate deals with the very companies they helped. Argentina hosted a major Phase 3 trial for Pfizer yet has been unable to reach an agreement with the company to buy its highly successful product.

Peru conducted trials for Sinopharm but then lawmakers say they couldn’t get a discount when the experimental phase was over and they had to start paying for Sinopharm’s shots.

“There are people there that are literally putting their bodies on the line to advance the development of these vaccines and then they’re being shortchanged when it comes to vaccine access,” says Martin with Doctors Without Borders. “Price is one element. The other one is whether they even get access to doses.”

He says a “vaccine apartheid” is developing in which the rich get early access to doses and access to the most effective shots.

As variants continue to spread, Martin warns global inequality to vaccines could get even worse.

“New variants may evade some of the vaccines, and then those vaccines are ones that wealthier countries won’t want to have, and those will be the ones that are available,” he says. “So we’ll have perhaps even more inequality in terms of the quality or adequacy of vaccines between high income countries and developing countries.”

Prime Minister Rowley of Trinidad and Tobago says it doesn’t have to be this way.

“History is littered with instances of destructive behavior, disrespectful dominance, imbalances and other forms of man’s inhumanity to man,” Rowley said.

“But on this rare occasion, when we are all yoked to an invisible destroyer, it is my hope and plea that when the journal of this experience is written, it would deviate from what is mostly the norm and record that on this occasion, the rich took care of the poor. And the small and impecunious were not trampled with disdain by those who could have done so simply because they had the wherewithal to do it.”

He called for global vaccine distribution based on models of “sharing and caring” that provide equitable access to small countries like his and “benefit of all humankind and not just the privileged, well-heeled few.”