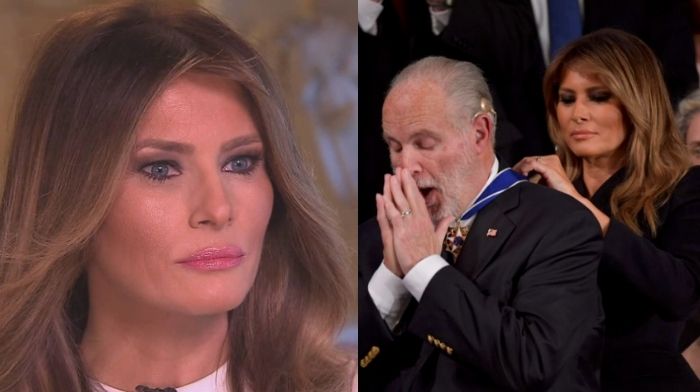 The legendary radio host Rush Limbaugh passed away on Wednesday morning after a battle with cancer. Within hours of his death, former First Lady Melania Trump took to Twitter to pay tribute to him.

“Rush was a fearless American patriot. He made countless contributions to society and leaves behind an unforgettable legacy,” Melania tweeted. “Praying for Kathryn and the entire Limbaugh family.”

Rush was a fearless American patriot. He made countless contributions to society & leaves behind an unforgettable legacy. Praying for Kathryn & the entire Limbaugh family. https://t.co/kVB97ta979

Weeks after Limbaugh was diagnosed with cancer last year, the White House invited him and his wife Kathryn to join Melania in her box during the State of the Union. Former President Donald Trump then surprised Limbaugh by stopping his speech to give him the presidential Medal of Freedom.

The former president released a statement honoring Limbaugh after his death today.

“The great Rush Limbaugh has passed away to a better place, free from physical pain and hostility,” Trump said. “His honor, courage, strength, and loyalty will never be replaced. Rush was a patriot, a defender of Liberty, and someone who believed in all of the greatness our Country stands for.”

“Rush was a friend to myself and millions of Americans—a guiding light with the ability to see the truth and paint vivid pictures over the airwaves,” he added. “Melania and I express our deepest condolences to his wonderful wife, Kathryn, his family, and all of his dedicated fans. He will be missed greatly.”

Statement from former President Donald Trump on the death of the great conservative Rush Limbaugh. pic.twitter.com/SD95DKp2aW

Trump Opens Up About Friendship With Limbaugh

Trump delved deeper into this during an interview with Fox News on Wednesday.

“Three or four days ago, I called him,” Trump said. “His fight was very, very courageous and he was very, very sick and, you know, from diagnosis on. It was just something that was not going to be beat, but you wouldn’t know it.”

Trump went on to say that Limbaugh “told me he was married to an angel.”

“Every time I spoke to him, he would tell me how great she was. She took such great care,” the former president said. “He was very brave — I mean he in theory could have been done four months ago, really. He just, he was fighting ’til the very end. He was a fighter.”

Trump went on to talk about what Limbaugh thought about this past presidential election.

“Rush thought we won. And so do I, by the way. I think we won substantially. And Rush thought we won,” Trump said. “Rush felt that way strongly. And many people do, many professionals do. And I don’t think that could have happened to a Democrat, you would have had riots going on all over the place … But Rush felt we won and he was quite angry about it, quite angry.”

This piece was written by James Samson on February 17, 2021. It originally appeared in LifeZette and is used by permission.