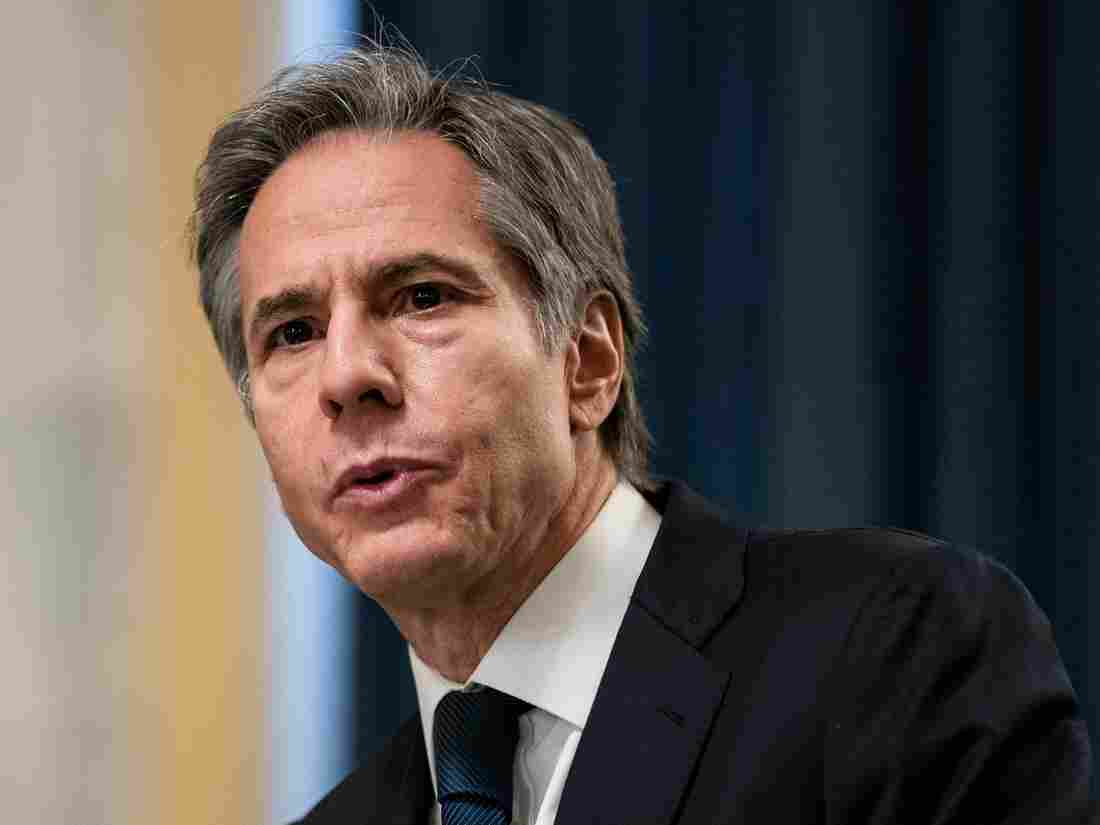 Secretary of State Antony Blinken speaks during his confirmation hearing before the Senate Foreign Relations Committee in Washington last month.

Secretary of State Antony Blinken has been in office three weeks. He arrives at a challenging time: the U.S. must figure out how to deal with China, Russia and Iran, the coronavirus pandemic rages on, and the State Department must rise from the morale slump it suffered during the Trump administration.

In an interview Tuesday with NPR’s Mary Louise Kelly, Blinken said that “there is no doubt” that the ability of American diplomats to promote democracy and human rights has been “tarnished by recent events.”

If the U.S. and Iran are to reenter a nuclear deal, he said, “we need to work on an agreement that’s longer and stronger than the original one.” Time has passed, and Blinken says Iran’s nuclear capabilities are “heading in the wrong direction.”

You can read a full transcript of the interview here.

“Our hope is that every single day the work we’re doing is helping to make the American people just a little bit safer, a little bit more prosperous, a little bit healthier,” Blinken said. “And if we’re doing that and we accumulate enough steps, we’ll be in a better place in a few years.”

With those values under assault in the U.S., Blinken said that makes diplomacy a bit more tricky.

“There is no doubt that our ability to wave the banner of democracy and human rights to some extent has been tarnished by recent events, especially the egregious attack on the Capitol on Jan. 6,” he said.

But American democracy is resilient, he says — and that is itself a model for the world.

“Even as we’re grappling with this ongoing problem, we’re doing it in a way that is transparent, that is out there for the entire world to see. And unlike in some other places, we’re not trying to sweep it under the rug,” he said. “We’re confronting it. And sometimes it’s ugly, sometimes it’s painful, but it’s also incredibly powerful.”

He says he tells his counterparts around that world “that our democracy is strong, it’s resilient. And the very fact that we’re constantly trying to build that more perfect union is an acknowledgement of our imperfection. But also, it’s in the striving that you really make progress. And I think there’s a model there for others.”

Blinken listed a number of actions that the Biden administration has already taken, including rejoining the Paris climate accord, reengaging with the World Health Organization, ending the travel bans that primarily affected Muslim-majority and African countries, restoring the U.S. refugee program, and joining the United Nations Human Rights Council as an observer.

“In the space of just a few weeks, we reengaged with allies and partners around the world. I think I’ve made myself maybe 50 calls already.”

He said that U.S. policy continues to be that Iran must must not be allowed to get a nuclear weapon.

The Iran nuclear deal — the JCPOA — was effective in cutting off Iran’s pathways to produce fissile material for a nuclear weapon, Blinken said, “And it’s very unfortunate that we pulled out of it.”

But merely restarting the JCPOA, he says, is no longer sufficient. The Trump administration formally left that deal in May 2018, and in the years since, Iran has ramped up its nuclear program.

Blinken suggested any future deal would need to address other “deeply problematic” issues like Iran’s actions in other countries in the Middle East.

“Time has passed. And so if we’re to get back into the deal, if Iran returns to compliance and we do the same, we need to work on an agreement that’s longer and stronger than the original one. … But the first step would be Iran returning to compliance.”

Blinken said he that believes the Trump administration was right to get tough on China, but their approach did not get results. “The common denominator has to be approaching China from a position of strength, not weakness. That strength comes … first and foremost from working in close coordination with allies and partners who may be similarly aggrieved by some of China’s practices. When we’re in the business of picking fights with our allies instead of working with them, that takes away from our strength in dealing with China,” he said.

“Similarly, being engaged, leaning in, showing up around the world is a source of strength,” he continued. “When we pull back from that, when we abdicate our responsibility, when we’re not engaged in helping to write the rules and shape the norms that govern relations among nations, then guess what happens? China fills in and takes our place. “

The secretary said the pandemic has so far quashed any travel plans, preventing him from seeing both his counterparts and State Department employees.

“I wish I could do that tomorrow,” he said. “We have to get beyond COVID-19, or at least get to the point where it’s safe to travel. And we’re not quite there yet.”