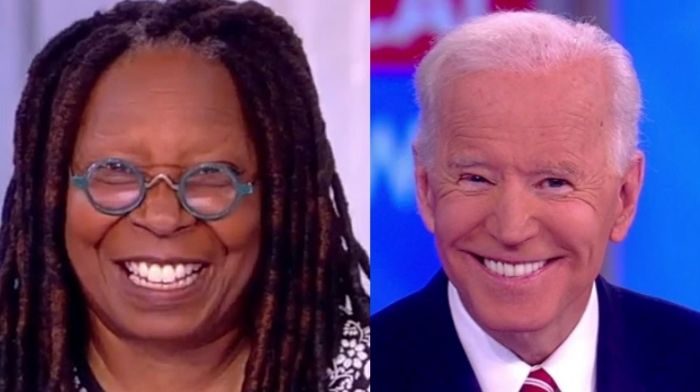 On Monday’s episode of “The View,” cohost Whoopi Goldberg celebrated Presidents’ Day by gushing about Joe Biden like it was her job.

Goldberg introduced a montage of positive clips of Biden by saying that “we finally have a president in office who we are honored to celebrate.”

Whoopi Goldberg And ‘The View’ Hosts Gush Over Biden

“Today is Presidents’ Day, and it’s been a long time coming for all of us here on ‘The View’ because we finally have a president in office who we are honored to celebrate,” she said.

“Plus, our other relationship with President Biden goes way back before he became number 46. take a look,” Goldberg added.

After the montage, the cohosts went all out in heaping praise on Biden.

“He’s adorable. He’s so genuine and sweet and lovely and funny. Everything you want in a man and in a president, you know? He’s great, and he’s right for these times. He’s perfect for these times, I think,” said cohost Joy Behar.

“That was cathartic to watch,” Sara Haines chimed in to say, before Behar added, “I’m glad we have him.”

That’s when Goldberg brought this ridiculousness to a whole new level.

“I think it’s why he didn’t win before because it wasn’t his time because he was going to be needed later on,” she said. “So, you know, I have to say, you know, he’s a great riding buddy if you are on the train. You know?  I love riding. I would catch up with him back and forth on the train, and he’s just a great guy.”

Related: Whoopi Goldberg Goes Off On Republicans Who Voted Against Impeachment – ‘You’re Scared’

“He’s a real guy,” Goldberg added. “So I understand talking to him a lot. So I’m glad we got him too, Joy. I’m glad we all got him. He’s all of our presidents. He’ll figure out how to make it work for everybody, and that’s the best thing.”

This #PresidentsDay, we look back at our time with Pres. Joe Biden on @TheView and the conversations with him long before he became the 46th president of the United States. https://t.co/f8u2wbJuik pic.twitter.com/8nunnSrPN1

This is in stark contrast to the way the women of “The View” treated former President Donald Trump during his time in office.

Goldberg refused to even say his name during his  presidency, and Behar accused him of everything from rape to murder in her daily unhinged rants against him.

This piece was written by James Samson on February 15, 2021. It originally appeared in LifeZette and is used by permission.