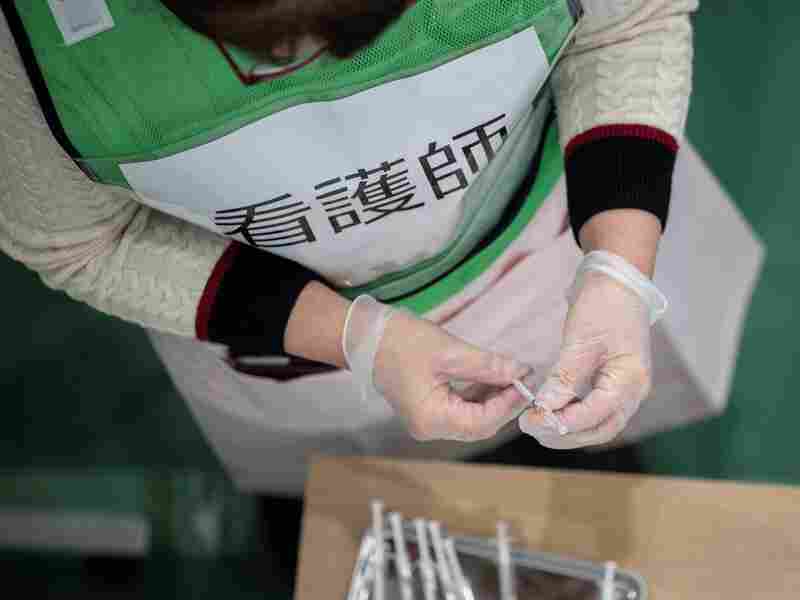 A nurse prepares syringes for a coronavirus vaccination drill in Kawasaki on Jan. 27, 2021. Philip Fong/AFP via Getty Images hide caption

A nurse prepares syringes for a coronavirus vaccination drill in Kawasaki on Jan. 27, 2021.

Japan may have several million fewer coronavirus vaccine doses than originally planned because the country does not have the appropriate syringes, in another setback to one of the slower vaccination rollouts among developed economies.

The Pfizer vaccine normally contains five doses per vial. But a special syringe, known as a low dead space syringe, which expels more medicine from the space between a syringe’s needle and plunger, can eke out six doses per vial.

“We will use all the syringes we have that can draw six doses, but it will, of course, not be enough as more shots are administered,” Health Minister Norihisa Tamura said Tuesday.

This means that the Pfizer vaccines, that could have been enough for 72 million people, will only cover 60 million. The Kyodo news agency reports that Japan will try to purchase additional doses from Pfizer.

“Since the vaccine is precious, many countries are trying to get six doses per vial,” said Dr. Eji Kusumi, who runs the Navitas clinic in Tokyo. “You’d be lucky to get six, but if not, you end up with five. I think it cannot not be helped.”

The syringes are a specialty product, for which demand is usually low, and the rollout of the Pfizer vaccine has set off a scramble among other countries to get more of the syringes.

Reuters reported last month that the world’s largest syringe maker, New Jersey-based Becton, Dickinson and Company, is supplying the U.S. government with 40 million low dead space syringes, out of a total of 286 million syringes. The federal government invested more than $40 million last July to help ramp up production of syringes, and last month President Joe Biden invoked the Defense Production Act, which may provide assistance to the firm.

Much of Japan is currently under a state of emergency to beat back a third wave of infections. It’s expected to start vaccinating frontline medical personnel this month.

“Japan finished negotiations to buy vaccines at a rather early stage,” said Eji Kusumi. “However, they were late in starting clinical testing, and that caused delays in providing the vaccine to citizens.”

A faster rollout could save lives, Kusumi noted, but Japan has insisted on testing vaccines at home before approving them. Testing for the Pfizer vaccines did not begin until December.

Prime Minister Yoshihide Suga has defended the speed of the country’s rollout of vaccines, saying their safety and effectiveness must first be properly confirmed.

“Japan has been handling the approval process as ‘business as usual,'” Kusumi added. “It would look especially slow, if you look at it from outside Japan.”

Chie Kobayashi contributed to this report from Tokyo.