Bill Maher Claims Christianity Is To Blame For Capitol Riot 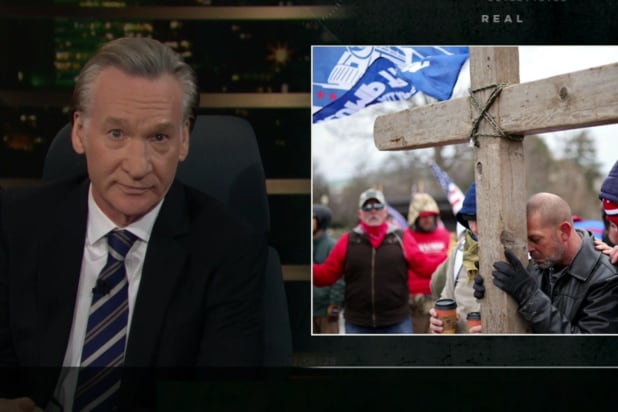 Maher, 65, claimed that a belief in Christianity is comparable to a belief in conspiracies like QAnon, and he said this led in part to supporters of former President Donald Trump storming the Capitol last month.

“As long as we’re going to go to the trouble of another impeachment trial, we might as well be honest about what it’s really about: The events of Jan. 6 were a faith-based initiative,” he said.

Not stopping there, Maher alleged that Trump supporters who believe in a “Christian nationalist movement” are firm in their beliefs that God “literally sent [Trump] from heaven to save them.”

He cited comments made by Alabama Republican Sen. Tommy Tuberville, who once said that God personally chose Trump for president of the United States of America.

“There’s a lot of talk now in liberal corners about how Republicans should tell their base who still believe the election was rigged that they need to grow up and move on and stop asking the rest of us to respect their mass delusion,” Maher said.

“And, of course, it is a mass delusion. But the inconvenient truth here is that, if you accord religious faith the kind of exalted respect we do here in America, you’ve already lost the argument that mass delusion is bad,” the HBO host continued.

Related: Bill Maher Panics Over Trump’s ‘Radio Silence’ After Leaving White House. – ‘Does That Not Alarm You A Little?’

He then directly compared Christianity and QAnon.

“It’s fun to laugh at QAnon, with the baby-eating lizard people and the pedophile pizza parlors, but have you ever read the book of [Revelation]? That’s the Bible,” he said. “That’s your holy book, Christians. And they’ve got seven-headed dragons and locusts that have the face of men and teeth of lions and other stuff you see after the guy in the park sells you bad mushrooms.”

Maher went on to say that “magical religious thinking,” such as faith in Jesus’ resurrection, is not dissimilar to a “current mutation” of the QAnon “virus.”

“All the armies of the world will gather and Jesus will come down on a flying horse, shooting swords out of his mouth, and have a thousand-year cosmic-boss battle with Satan, the Beast, and the antichrist. … It’s like 10 ‘Avenger’ movies plus 10 ‘Hobbit’ movies plus a night out with Johnny Depp,” Maher said.

“Please, magical religious thinking is a virus and QAnon is just its current mutation,” he insisted. “That’s why megachurches play QAnon videos. It’s the same basic plot. ‘Q’ is the prophet and Trump is the messiah. There’s an apocalyptic event looming, ‘The Storm.’ There’s a titanic struggle of good versus evil, and if you want good to win, just keep those checks coming in.

“We need to stop pretending there’s no way we’ll understand why the Trump mob believes in him. It’s because they’re religious! They’ve already made space in their heads for s**t that doesn’t make sense,” Maher concluded. “When you’re a QAnon fanatic, you’re also a fundamentalist Christian. They just go together like macaroni and cheese.”

This piece was written by James Samson on February 8, 2021. It originally appeared in LifeZette and is used by permission.