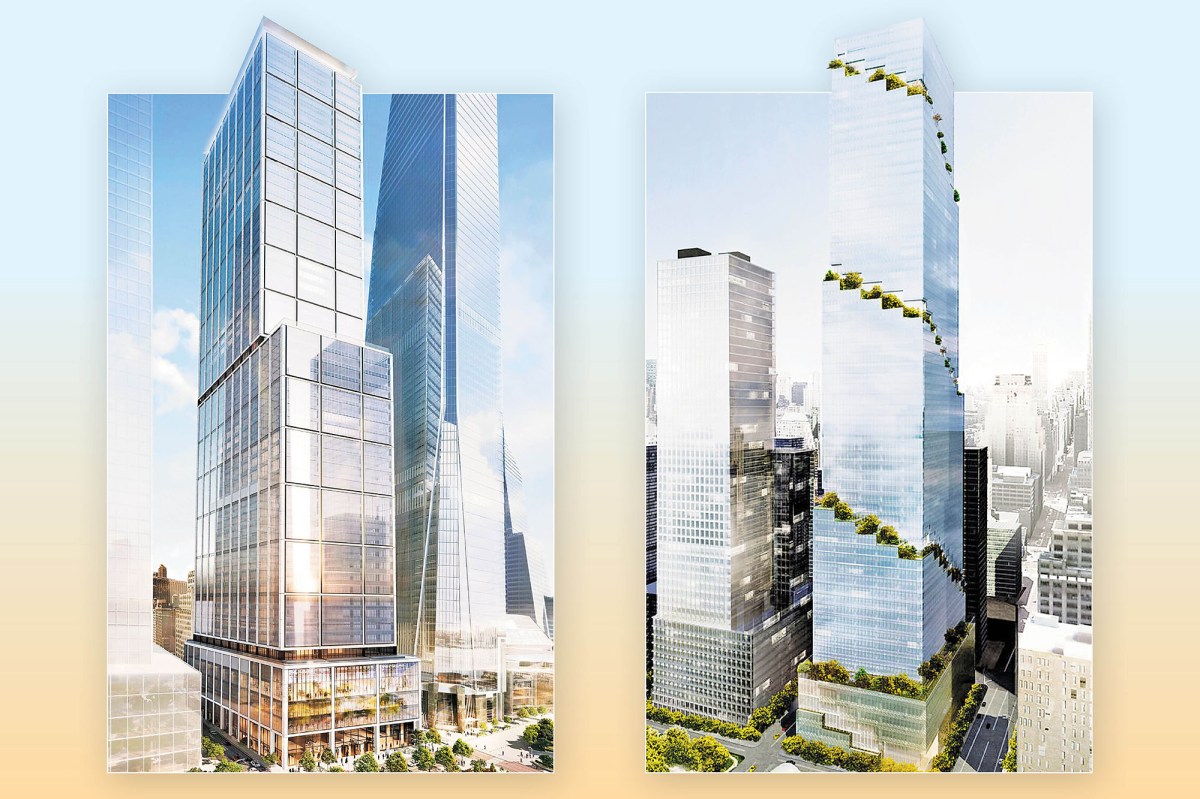 The dreaded “G-word” — as in glut — overhangs nearly 8 million square feet of space up for grabs in “trophy” office buildings that just opened or are set to open by the end of 2022.

The tally we did with help from CBRE means nearly three Empire State Buildings’ worth of Manhattan’s most expensive floors have yet to be claimed during the worst leasing crisis in the city’s history.

Overall Manhattan availability has leapt to 15 percent from 11 percent since early last year. Physical occupancy is a mere 15 percent as employees continue to work from home.

Glamorous, “starchitect”-designed additions to the skyline set the tone for the entire city. A load of unleased space at them would shadow the market for years as did over-built Times Square in the 1980s.

But the coming wave of new offices, where most rents will top $100 per square foot, might be timed just right for companies that increasingly gravitate to state-of-the-art products. Tenants like Pfizer, Skadden Arps and Time Warner could have saved a lot of money at cheaper, older locations but preferred to pay more for amenities at their new Hudson Yards-area homes.

Developers boast about their signed early commitments, such as Pfizer’s 800,000 square feet at The Spiral. But pandemic-battered builders must still find takers for jumbo blocks at their new skyscrapers. The largest available blocks are 1.4 million square feet at Brookfield’s Two Manhattan West, 1.2 million sf at Tishman Speyer’s Spiral and 807,000 sf at Related’s 50 Hudson Yards.

Immediate or imminent large availabilities also exist at works-in-progress 550 Madison Ave. and 660 Fifth Ave., both undergoing major redesigns, and at older properties like Three and Five Times Square which will be virtually new following top-to-bottom upgrades.

Gloom-mongers call every short-term surplus a “glut.” But brokers’ rosy forecasts can’t be entirely trusted either. Their argument that 7 million square feet are a minute fraction of Manhattan’s 440 million square-foot inventory is little comfort to a landlord with a half-million vacant square feet and lenders breathing down his neck.

Although demand is weak, one possible suitor for a Manhattan base is much-in-the-news Robinhood, which the Real Deal reported is interested in 60,000 square feet. The day-trading shop might well be drawn to the bells-and-whistles — and prestige — of a brand new building.

For perspective, we went to analysts with neither agendas to promote nor axes to grind.
Real Capital Analytics senior vice president Jim Costello noted that “Is Manhattan dead?” scenarios overlook the “long term.”

“People have been talking about the death of cities since the Black Death,” Costello said. What can’t be accomplished via Zoom — meeting new clients and business partners and creative collaboration — “are what cities make easy. I believe those features don’t go away.

“At some point, demand comes back. But at the same pace? That’s the big unknown. If it takes longer, then maybe some developers don’t have the wherewithal to get through it.”

Online research and operating platform VTS, which does extensive research to support its mission as a marketing tool for commercial real estate professionals, found a bright side.

Its VODI (VTS Office Demand Index), while noting that “demand [is] still 74 percent down from pre-COVID-19 levels,” cited better tidings for new projects. The index — which counts “tire-kicking” tours by prospective tenants — said, “Leasing demand in New York City has shifted towards Trophy and Class A office space and away from Class B properties post-COVID-19.

“Tours of Class A and Trophy spaces are taking up more than their typical share in the market at 69 percent in the last quarter of 2020, signaling the financial strength of tenants still active in the market.”

That means that firms are chasing advanced technological, sustainability and environmental features that exist primarily at buildings such as Two Manhattan West and The Spiral.

Collaboration between SL Green and superchef Daniel Boulud on a pricey new restaurant at One Vanderbilt catalyzed a Herculean food-relief campaign for the city’s pandemic-era neediest — including the homeless, front-line health workers and others suffering economic calamity.

As work on One Vanderbilt and restaurant Le Pavillon moved along early last year, SL Green CEO Marc Holliday kick-started Food1st with a $1 million seed contribution in April 2020. He enlisted his friend and eatery partner Boulud to provide the culinary expertise.
Restaurants shuttered by the lockdown included several at SL Green buildings.

“Marc told me he was very sorry for our industry and wanted to help,” Boulud said.

The 501(c)(3) nonprofit drew $4 million more from other donors. The original effort to feed 2,000 emergency health workers staying in hotels grew into a sprawling campaign “to help our restaurants and to provide meals to those on the front lines and those who are food-needy,” said SL Green vice president Harrison “Harry” Sitomer.

“Helping people, serving people, that makes me feel like I’m in heaven,” said Pepe Castro, a chef at Just Salad.