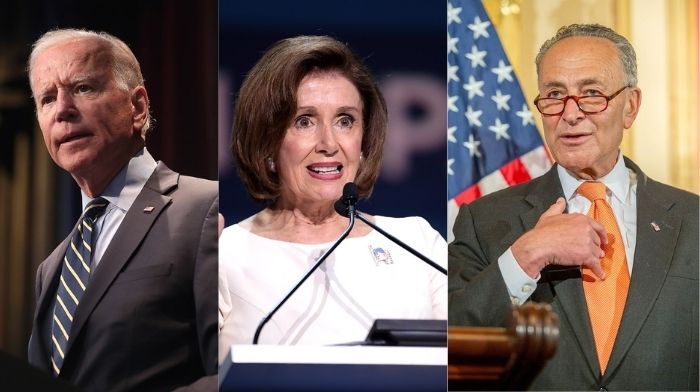 In a joint statement put out on Twitter, Pelosi and Schumer stated, “The cost of inaction is high and growing, and the time for decisive action is now.”

“We are hopeful that Republicans will work in a bipartisan manner to support assistance for their communities, but the American people cannot afford any more delays and the Congress must act to prevent more needless suffering,” the statement added.

Breaking: Schumer & Pelosi have filed a joint budget resolution, setting up the reconciliation process to streamline passage of Biden’s $1.9 trillion COVID package with or without GOP support pic.twitter.com/yEK83L7sya

RELATED: Biden Communications Team Asked Journalists For Questions In Advance According To Report

Prior to the election, the idea of ending the filibuster had been floated. The thought being that if it were to happen, it would be easy for Democrats to ram through a far-left agenda.

Sens. Joe Manchin (D-WV) and Kyrsten Sinema (D-AZ) had both stated they were against ending the filibuster.

The filibuster is only one of two guards against 51-vote power. Time for senators to declare themselves on the Byrd Rule. @KimStrassel https://t.co/T5lY5Wu12s via @WSJ

It’s more likely that Senate will pass any legislation through a process called reconciliation. it allows some spending and tax measures to pass with a simple majority.

In 1985, the late Senator Robert C. Byrd (D-WV) attempted to stop senators from abusing the simple majority rule by trying to put non-budget issues into those bills. The Senate adopted the rule, which basically puts the Senate Parliamentarian in charge of deciding whether issues put into reconciliation bills are actually budget related.

What the Byrd rule does is prevents the majority from using reconciliation to get around the filibuster.

Even with Manchin and Sinema saying they are against ending the filibuster, some progressive groups are putting pressure on other Democrats to basically put the Biden agenda into reconciliation bills, and then overrule the parliamentarian when they are found in violation of the Byrd rule.

A group of ten Republican senators met with President Biden on Monday night to discuss a possible bipartisan way forward on the COVID relief bill. Should an agreement be reached by that group of senators, plus fifty Democrats, there would be enough votes to avoid a filibuster by other Republicans in the Senate.

In a statement from all ten Republican Senators, they expressed that they were “appreciative that in his first official meeting in the Oval Office, President Biden chose to spend so much time with us discussing the response to the COVID crisis.”

We had an excellent two-hour meeting with President Biden, where we presented our COVID-19 relief proposal & had a very productive exchange of views. https://t.co/kM0xQowGQf

Had a productive meeting in the Oval Office tonight with President Biden and several of my colleagues. We presented our more targeted COVID relief proposal, and talks between our group, the administration, and other Senators will continue. pic.twitter.com/IwUXrAQCja

RELATED: Of The 10 Republicans Who Voted To Impeach Trump, 7 Are Already Facing Primary Challenges

Democrats Plan on Flexing Their Muscle

While GOP members of the Senate described a positive meeting with the president, White House Press Secretary Jen Psaki reiterated that the president does share, “a desire to get help to the American people…that he will not slow down work on this urgent crisis response, and will not settle for a package that fails to meet the moment.”

In his meeting with GOP senators, Biden “reiterated that while he is hopeful that the Rescue Plan can pass with bipartisan support, a reconciliation package is a path to achieve that end” and he won’t “settle for a package that fails to meet the moment,” the White House says.

The Republican proposal is just over $600 billion, which is described as “targeted,” and is a third of the size of President Biden’s $1.9 trillion proposal. Pelosi and Schumer are using Biden’s number as a guide for their work in Congress.