Coronavirus FAQ: I’m Using A UV Light To Disinfect Stuff. Is That A Good Idea? 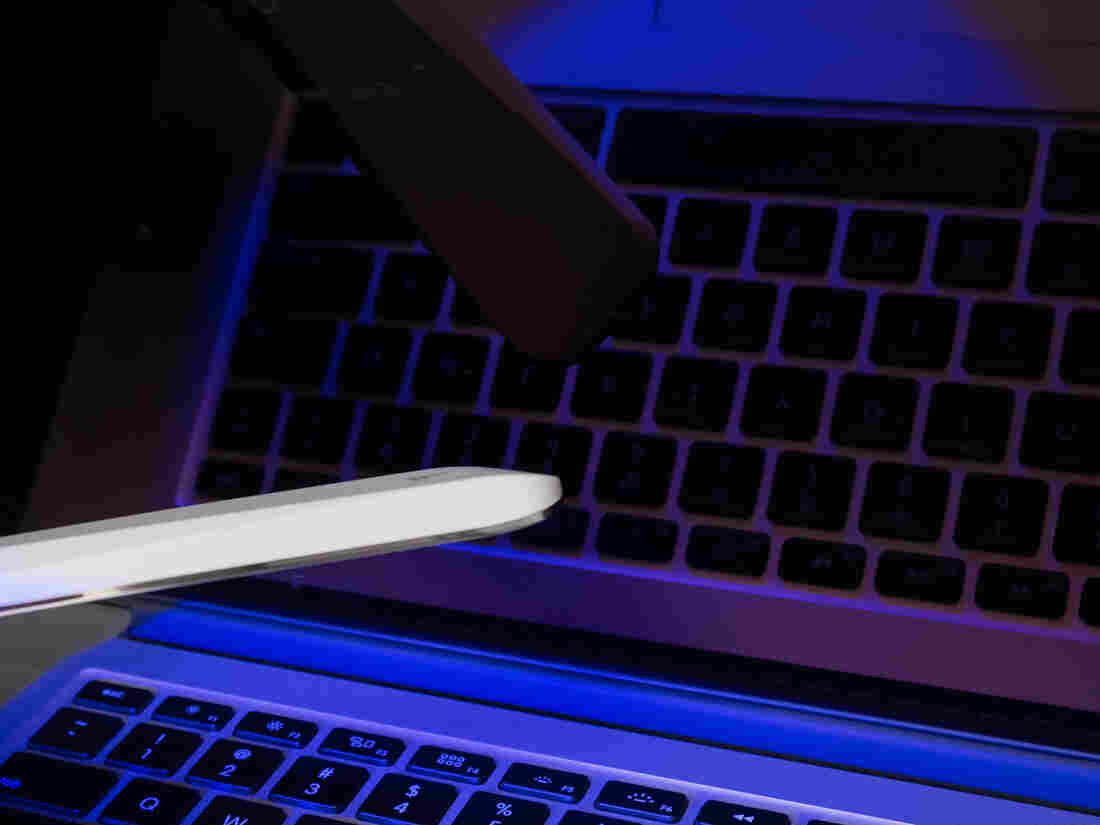 A handheld ultraviolet-C wand is waved over the surface of a computer keyboard. Michele Abercrombie/NPR hide caption

A handheld ultraviolet-C wand is waved over the surface of a computer keyboard.

Each week, we answer frequently asked questions about life during the coronavirus crisis. If you have a question you’d like us to consider for a future post, email us at goatsandsoda@npr.org with the subject line: “Weekly Coronavirus Questions.”

I’m using a lamp that emits UV light in my house to try and kill pathogens — the coronavirus in particular. Is it doing any good? And … could exposure to the light be risky for me in any way?

Let’s start with the good news: Some recent studies confirm that SARS-CoV-2 is one of the viruses, along with other types of coronaviruses, that can be killed by ultraviolet light rays.

Actually, we’ve known that UV light kills a lot of different germs since the late 1800s when scientists discovered that shorter wavelengths of ultraviolet light rays emitted by the sun — what we now call ultraviolet-C rays or UVC light — could kill bacteria. And unlike the longer wavelengths of the sun’s UV light, UVC rays don’t naturally hit the Earth’s surface, so they’re particularly lethal for microbes that haven’t had a chance to adapt to them.

Since then, UVC technology has been used for sanitation. Hospitals and water treatment plants, for example, rely on the rays to kill mold, viruses and bacteria. And with the promising research into COVID-19-killing potential, UVC light-emitting machines are being utilized more — popping up in empty subway cars and even the air ducts of many public places, including restaurants.

About Goats and Soda

Goats and Soda is NPR’s global health and development blog. We tell stories of life in our changing world, focusing on low- and middle-income countries. And we keep in mind that we’re all neighbors in this global village. Sign up for our weekly newsletter. Learn more about our team and coverage.

And the technology is making its way into consumer culture as well, with free-standing UVC lamps meant for your home or office. They’re often labeled as desk lamps or table lights and priced in the $50 to $100 range. Alternatively, there are even cheaper, more mobile ultraviolet gadgets such as handheld wands, or light boxes with lids, that are promoted as safe, easy-cleaning tools for small objects such as phones, computer keyboards and eyeglasses.

But here’s the bad news.

Although it’s been proven that ultraviolet-C light can kill the coronavirus in controlled research environments using specific doses, there’s no guarantee that a lamp will.

Manufacturers use pleasant words such as “sterilizing” and “germicidal” to reference the lamp’s ability to kill germs. But they are careful when it comes to stating which germs. Although they do typically list some specific bugs susceptible to the light — think influenza or E. coli, for example — you won’t see the coronavirus in the mix. The Food and Drug Administration says we still don’t have enough data about the dose, wavelength or duration of UVC light rays needed to kill the coronavirus in the air or on surfaces, which means there’s no certainty that any ultraviolet lamp can get rid of it.

Another issue is that the UVC lamps you can buy online are often smaller than the industrial lamps used to kill viruses in labs. Or they emit light from only one angle, which can become a big problem since the light rays aren’t effective at wiping out pathogens if they’re obstructed by really anything — such as dust, crevices or room angles that form shadows.

Maybe more problematic is the temptation to turn on these portable lamps throughout the day to fight germs. But the room must be cleared of absolutely everyone before you use it: Otherwise, ultraviolet light lamps could hurt your eyes — or the eyes of your co-workers or family members or roommates — if used incorrectly.

Guillermo Amescua, an ophthalmology specialist with the Bascom Palmer Eye Institute at the University of Miami, warns of a condition called photokeratitis. It is like a sunburn causing inflammatory damage to several layers of the eye, not just the skin around it, with symptoms such as severe eye pain or redness, blurry vision, eye twitching, light sensitivity or even temporary loss of vision.

Though photokeratitis can be caused by looking directly into a lamp as it radiates ultraviolet light (similar to bare eyes staring at the solar eclipse back in 2017), it can also happen if you’re in the same room as a UVC device that produces light, which is why using them can get tricky.

While some manufacturers are quite clear in their recommendation that the room, big or small, must be free of living creatures (including animals) when the lamp is turned on, others use generic language such as “no people or pets around,” which might imply it’s OK to distance yourself a bit and hang around in the same room — but it’s not. When the light is on, you should be out.

Amescua has been hearing about a lot of patients diagnosed with photokeratitis after staying in the room while their UVC lamp was on before coming in with symptoms. And there’s been a lot more of them than usual. So many, in fact, that he and his colleagues authored a research article to alert people of the danger after a big uptick in cases following the start of the pandemic.

Many times, the harmful effects are quick to reveal themselves. “It could be four to six hours after being exposed that patients come in with eye damage, depending on the amount of energy of the lamp and the amount of time exposed,” Amescua says, noting it can happen in as quickly as 15 or 20 minutes. Luckily, he says most patients fully recover with treatments such as prescription eye drops, eye rest and sometimes a special contact lens.

But the buck doesn’t stop at short-term eye damage when we’re talking humans using UV lights for sanitizing. The FDA warns of other serious and long-term risks of repeatedly exposing your eyes or skin by being in the same room with them, including deadly skin cancers or long-term eye damage such as cataracts.

And to complicate things further, some UVC lamps sold online also emit ozone, an invisible gas that can also kill microbes. Most of these lamps, which often boast of their “ozone power” in marketing lingo, also require an “air-out” period — a block of time when humans and pets shouldn’t come back in the room even after the lamp turns off — to give the ozone gas time to dissipate, as it can irritate the lungs if inhaled.

So you can draw your conclusions about UVC lamps from the data — and warnings — now available. But whatever you conclude, keep in mind that they can’t take the place of other ways we fight the spread of the coronavirus, says Peter Gulick, an infectious disease doctor and virus expert at Michigan State University. He emphasizes the importance of wearing masks, staying 6 feet away from people and washing your hands often.

“If you’re going to use [UV light] then use it, very carefully. But don’t think it’s going to substitute for other protective practices that we know are working,” Gulick says. “We don’t want to have situations where people say, ‘Ah, we’ve used UV light in here, so it’s safe to forget everything else.’ “

Kristen Kendrick is a board-certified family physician in Washington, D.C., and a health and media fellow at NPR and Georgetown University School of Medicine.