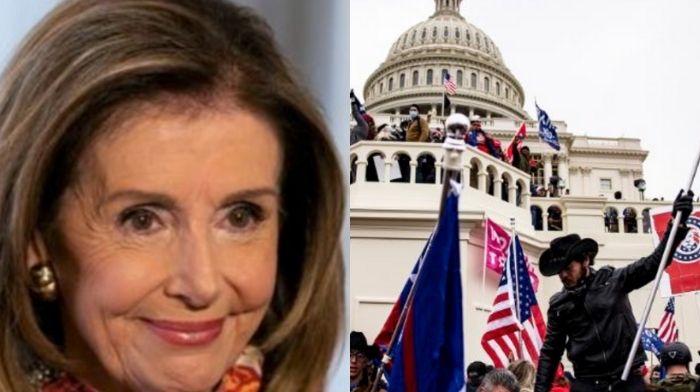 Speaker of the House Nancy Pelosi (D-CA) sent a letter to her fellow Democrat lawmakers on Wednesday urging them to “write your story of January 6,” referring to the Capitol riots.

“Today also marks three weeks since the insurrection against the U.S. Capitol and against our Democracy,” Pelosi wrote, according to The Hill. “I urge all Members to take advantage of this time to write your story of January 6.”

“I also hope you have taken advantage of the trauma and resilience resources provided by the Office of Employee Assistance, and I encourage you to do so if you have not. Members have told me that they have found these resources to be beneficial,” she added.

Related: Pelosi’s Past Comes Back To Haunt Her – She Once Praised Unionists Storming State Capitol Of Wisconsin

Pelosi led the charge in the House impeaching Donald Trump for a second time for allegedly inciting the Capitol riots. A Senate impeachment trial has been scheduled to take place on February 8, and if he is impeached there, he will not be allowed to run for office again.

Rep. Alexandria Ocasio-Cortez (D-NY) has described the Capitol riots as a “pretty traumatizing event,” going so far as to say that she thought she was “going to die” at one point. She has also indicated that she will be receiving counseling to deal with the trauma she supposedly suffered from during this event.

Pelosi concluded her letter with some encouraging words for her Democratic colleagues, claiming that the work that they are doing is “for the people.”

“As we continue our work For The People, we must do so prayerfully, solemnly and courageously,” wrote Pelosi.

Related: Nancy Pelosi Suggests Trump Could Be Charged As Accessory To Murder For Capitol Riots

Pelosi has previously said that she is “not worried” that impeaching Trump will undercut the message of unity that President Joe Biden claims to want to push.

“No, I’m not worried about that,” Pelosi said. “The fact is the president of the United States committed an act of incitement of insurrection. I don’t think it’s very unifying to say, ‘Oh, let’s just forget it and move on.’”

This piece was written by James Samson on January 27, 2021. It originally appeared in LifeZette and is used by permission.