Biden’s Pick For U.N. Ambassador Faces Tough Questioning For Past Remarks On China 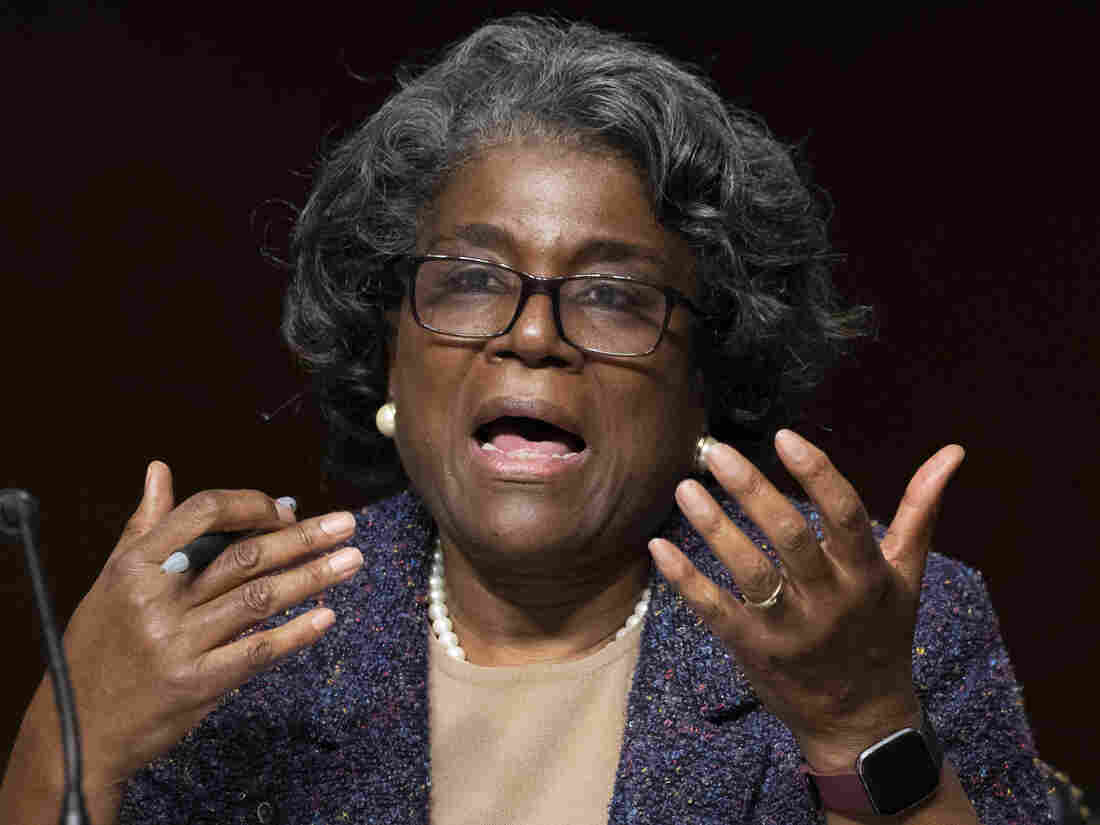 Linda Thomas-Greenfield appears before the Senate Foreign Relations Committee confirmation hearing on her nomination to be the United States ambassador to the United Nations, Wednesday. Pool/Getty Images hide caption

Linda Thomas-Greenfield appears before the Senate Foreign Relations Committee confirmation hearing on her nomination to be the United States ambassador to the United Nations, Wednesday.

Linda Thomas-Greenfield, President Biden’s nominee for U.S. ambassador to the United Nations, pledged to take a tougher line against China and its push to exert influence over the multinational organization during her Senate confirmation hearing Wednesday.

“We know that China is working across the U.N. system to drive an authoritarian agenda that stands in opposition to the values of the institution,” Thomas-Greenfield told lawmakers on the Senate Foreign Relations committee.

“Their success depends on our continued withdrawal,” she added. “That will not happen on my watch.”

It was an effort to show she would be tough on China, while also expressing remorse for giving a speech at a Chinese-funded foundation based on a university campus in Savannah, Ga., in 2019.

In the speech, Thomas-Greenfield offered qualified optimism that the U.S. and China could both be positive influences in Africa. Her remarks became a contentious issue for some members of the committee.

That speech, said Sen. Jim Risch of Idaho, the top Republican on the committee, “has become quite the buzz in these hallways in recent days.”

“I personally am not going to hold one speech against somebody, but you are going to have to speak to that,” he added.

“I truly regret having accepted that invitation and having had my name associated with the Confucius Institute,” Thomas-Greenfield said, referring to remarks she gave at Savannah State University, an historically black university.

In an exchange with Sen. Marco Rubio, R-Fla., she said she accepted the speaking invitation not as a favor to the institute, which has since closed at the university, but because of her long-standing relationship with Savannah State.

“I work very, very committedly to get out the message about foreign service careers across historically Black colleges and universities as well as Hispanic universities, because I strongly believe that our foreign service should be representative of America,” she said.

“And Savannah gave me the opportunity to do that.” 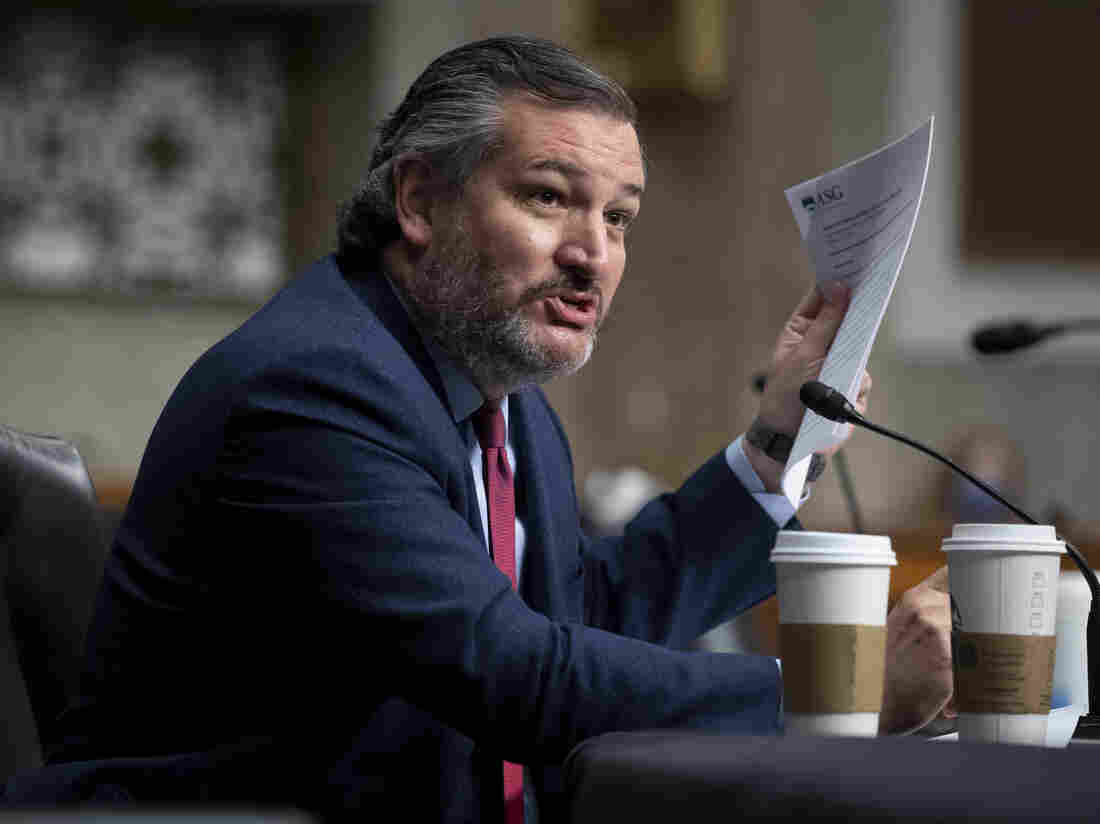 Sen. Ted Cruz, R-Texas, holds a copy of a 2019 speech by Linda Thomas-Greenfield that she delivered at the Chinese-government sponsored Confucius Institute at Savannah State University. Pool/Getty Images hide caption

Sen. Ted Cruz, R-Texas, holds a copy of a 2019 speech by Linda Thomas-Greenfield that she delivered at the Chinese-government sponsored Confucius Institute at Savannah State University.

Greenfield-Thomas also noted she was not paid by the Confucius Institute, but by the university.

“This speech is cheerleading for the Chinese Communist Party,” Sen. Ted Cruz, R-Texas, said during the hearing.

Thomas-Greenfield pushed back on that characterization, saying she has a long record in her career as a foreign service officer of calling out China for predatory lending practices in Africa and human rights abuses, topics she said came up in questions with students after the speech.

Democrats on the committee highlighted her life story, growing up in Louisiana, attending segregated schools, then going on to graduate from Louisiana State University prior to becoming one of the few Black women diplomats as why colleagues should confirm her for the U.N. ambassador post.

“Ambassador Thomas-Greenfield has lived the ideals of our nation, even at a time when it was falling short of our founding ideals and has spent her career blazing trails,” Sen. Chris Coons, D-Del., said during the hearing.

Sen. Cory Booker, D-N.J., defended the now controversial speech, not for its content, but for Thomas-Greenfield’s willingness to address a historically Black institution.

“The fact that you accepted an invitation from a Black college to give a speech, to me, shows you have the right priority list,” Booker said, praising her as part of a generation of women breaking down barriers.

“Our State Department ranks are woefully lacking in African Americans,” he added.

If confirmed, Thomas-Greenfield will represent the Biden administration at the U.N. during a period of renewed racial tensions in the United States. It would also mark her return to the foreign service after being pushed out during the Trump administration.

Prior to leaving diplomatic service in 2017, she oversaw the Bureau of African Affairs during the Obama administration. She previously served as director general of the foreign service as well as ambassador to Liberia.

President Biden has elevated the position of U.N. ambassador to cabinet level, giving another Black woman a prominent post within his administration.

In March, the U.S. will assume the presidency of the 15-member United Nations Security Council.

During her opening remarks before the committee, Thomas-Greenfield nodded to the four women who previously held the U.N. ambassador post, known as the U.S. permanent representative: Susan Rice, Nikki Haley, Kelly Craft and Samantha Power, Biden’s pick to lead the U.S. Agency for International Development.

But it was the 1950 Nobel Peace Prize acceptance speech by Ralph Bunche, the legendary African American diplomat, that she quoted from during the hearing, calling the United Nations “the greatest peace organization ever dedicated to the salvation of mankind’s future on earth.”

Thomas-Greenfield took it a step further, adding to Bunche’s remarks.

“But that’s only true if America is leading the way,” she said.

“When America shows up, when we are consistent and persistent, when we exert our influence in accordance to our values, the United Nations can be an indispensable institution for advancing peace, security and our collective well-being,” she continued.

“If instead we walk away from the table and allow others to fill the void, the global community suffers and so do American interests.”