‘Everything Broke’: Global Health Leaders On What Went Wrong In The Pandemic 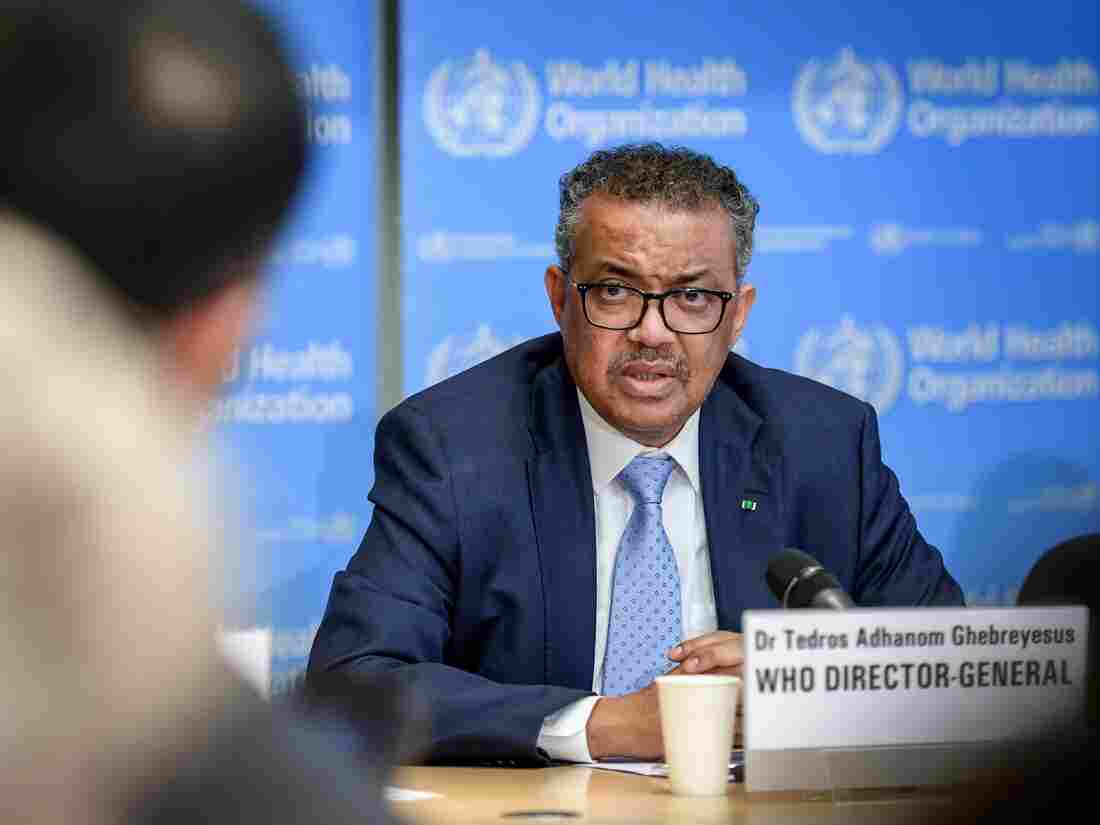 World Health Organization Director-General Tedros Adhanom Ghebreyesus was one of many global health leaders who spoke bluntly about the coronavirus pandemic at annual meetings that conclude on Tuesday. Discussing the lack of priority given to vaccines for poor countries, he stated, “The world is on the brink of a catastrophic moral failure.” Fabrice Coffrini/AFP via Getty Images hide caption

World Health Organization Director-General Tedros Adhanom Ghebreyesus was one of many global health leaders who spoke bluntly about the coronavirus pandemic at annual meetings that conclude on Tuesday. Discussing the lack of priority given to vaccines for poor countries, he stated, “The world is on the brink of a catastrophic moral failure.”

How to make sure the world is never so devastated by another pandemic?

Health officials from around the globe have been vigorously discussing that question over the past week at the annual meeting of the World Health Organization’s Executive Board. The members, whose nine-day-long, mostly virtual gathering concludes on Tuesday, have heard recommendations from four separate panels.

Some of these panels are high-powered, such as an independent advisory committee set up by the WHO to look at pandemic preparedness and led by former Liberian president — and Nobel Peace Prize winner — Ellen Johnson Sirleaf and former New Zealand Prime Minister Helen Clark.

Other committees are more narrowly focused, such as one composed of prominent scientists and health officials that is charged with reviewing how the current regulatory system for calling international health emergencies has worked during the coronavirus pandemic.

Two other committees were set up even before the coronavirus emerged to look more broadly at, respectively, the WHO’s new-ish Health Emergencies Programme and global pandemic preparedness and monitoring. Also weighing in over the past week were two key WHO officials: Michael Ryan, who heads up its Health Emergencies Programme, and WHO Director-General Tedros Adhanom Ghebreyesus.

While the conversations have been wide-ranging, common themes keep emerging. Here are six of them:

The pandemic’s toll of more than 2 million reported deaths and worldwide economic and social dislocation was not inevitable, said many speakers. It was the direct result of, as Clark put it, “a failure to prepare adequately for a pandemic threat despite years of warnings that better preparation was necessary.”

The hopeful side of this, at least, is that it suggests there are concrete steps that can be taken to prevent a repeat if another deadly virus emerges. But over and over again, the reformers stressed that half-measures will not suffice. As Clark’s committee co-chair, Sirleaf, put it, what’s needed now is a “fundamental reset” of the world’s preparedness and response systems.

The need for speed

Much of that reset will involve vastly increasing the pace at which individual nations and global organizations like the WHO assess incoming threats and take action. As Clark put it, “The international system for alert and response has the trappings of an analog system in a digital age.”

The issue, many argued, is not so much a lack of data. Said Clark, “Modern information systems [already] pick up signals of potential disease by sifting through hundreds of thousands of data points daily.”

Rather, the issue is that countries do not have the procedures in place to respond at the same rate. Among the ideas under discussion is finding a way to feed the signals from local clinics and laboratories into a real-time globally available tool.

Also at issue: how to speed up decision-making in response to the data, including a revamp of the WHO’s system for declaring when an emerging disease constitutes a “public health emergency of international concern.” It took the WHO four weeks after the coronavirus was identified to take that step. And even then, said Clark, “too many countries failed to act quickly and decisively enough to apply necessary and recommended public health measures.”

One solution is to create an intermediate level of alert that the WHO could sound before a full-on emergency is declared, noted the chair of one of the other review committees, Lothar Wieler, head of Germany’s infectious disease agency, the Robert Koch Institute.

But Wieler added, “It is far from certain that [this] would result in such earlier action.” A better option might use regular global and regional risk assessments to drive “earlier and more targeted response measures at all levels.” Countries also need to come up with clearer predetermined steps for responding to international alerts, said Wieler.

While experts are still debating precise solutions, concluded Wieler, there is strong agreement on the goal: “It is clear that global preparedness, alert and response actions need to start much earlier and more decisively than they did during COVID-19.”

Logistics are key — as are health workers

Mobilizing the entire world to respond to a pandemic isn’t just about getting countries to take action. It’s about ensuring they have the physical tools to respond: everything from diagnostic tests to treatments to vaccines. In other words, there is a huge logistical component to develop and distribute. When it came to that part, “everything broke in this COVID-19 pandemic,” said Ryan, the WHO’s head of emergencies.

So when it comes to preparing for the next big disease event, it will be crucial to address each of these breakdowns so the supply chain and logistics system are far more robust, Ryan said.

“It’s a much more complicated challenge,” he said. “And it is going to require a comprehensive and, dare I say it, complicated solution to make it work.”

Also needed, said Ryan, is a much bigger global health emergency workforce that can be rapidly deployed in emergencies. That’s because one feature of this pandemic is that countries, as well as regions within countries, were not all affected at the same time. Some were unscathed during moments when others were hard hit. “And if they had got more assistance more quickly — if we had been able to move [health workers] more quickly into those locations — we could have saved more lives.”

To maintain a truly robust system of disease detection and response will take money, of course. But many speakers said that just as important as getting together an adequate amount of funds is ensuring that this funding stream is reliable.

Felicity Harvey — chair of a panel charged with providing independent oversight of the WHO’s Health Emergencies Programme — said her committee “has repeatedly expressed its concern regarding the lack of predictable and flexible funding of the [emergencies] program.”

Sirleaf also raised the issue, saying, “If WHO is expected to fundraise perpetually because assessed contributions to it remain low, then this will come at the expense of its ability to focus on pandemic preparedness and response.”

Ryan, the Health Emergencies Programme head, did not dispute that. “I’ll put it to you plainly,” he said. “There is a massive gap in the rhetoric on funding [from donor countries] and the money we actually receive. … My grandfather used to say, ‘You get what you pay for.’ “

Inequality is a threat to everyone

The pandemic hasn’t just highlighted how unequal the world is when it comes to health care. The world’s response is actually now deepening those inequalities, said Liberia’s Sirleaf.

Take vaccines, she said. “Tens of millions of doses of vaccine are already available in some of the wealthiest countries. But based on current plans, vaccines will not be widely available across the African continent, for example, until 2022 or even 2023.”

“It is unacceptable,” Sirleaf continued, “for wealthy countries to be able to vaccinate 100% of their populations while poorer countries make do with only 20%.”

Tedros, the WHO’s head, sounded a similar note. He noted that although the WHO has worked with other international organizations and governments to set up a system — called COVAX — for purchasing vaccines in bulk so that even low- and middle-income countries have access, COVAX has been undercut by rich countries. “Some countries and companies continue to prioritize bilateral deals, going around COVAX, driving up prices and attempting to jump to the front of the queue.”

And, he and other speakers said, ultimately this would be a problem for rich countries too. The emergence of variant strains of the coronavirus that could end up being more resistant to the existing vaccines is a reminder that as long as the coronavirus is raging unchecked somewhere in the world, it is a potential threat everywhere in the world. In other words, said Tedros, “not only does this me-first approach [to vaccines] leave the world’s poorest and most vulnerable people at risk — it’s also self-defeating.”

But Tedros and others argued that it’s not too late to shift toward greater equity. In particular, they are advocating for wealthy nations that signed pre-purchase agreements with major pharmaceutical companies to now donate some portion of those vaccine doses to COVAX.

“I need to be blunt,” said Tedros. “The world is on the brink of a catastrophic moral failure.”

Why this pandemic could be the one that finally prompts action

Even as they made recommendations, many speakers seemed mindful of how many previous efforts to prepare the world for pandemics have failed.

“With every new pandemic or other major health threat, there are many evaluations which come up with dozens of recommendations,” said Sirleaf. “They are nearly too numerous to count, and too few of them have been acted on.”

Yet she expressed hope that the sheer magnitude of the crisis this time could make the difference. “This is a unique opportunity born out of the gravity of this crisis,” said Sirleaf, “to reset the system.”