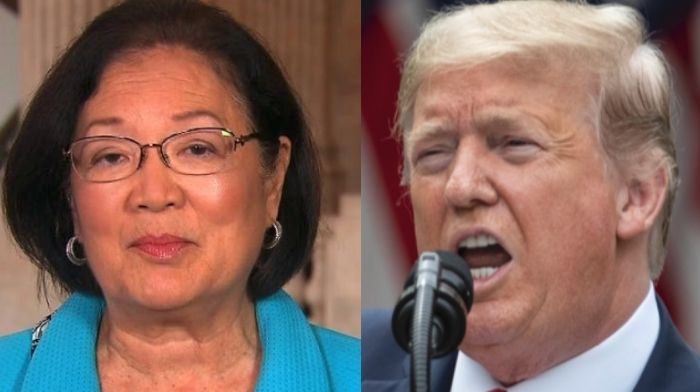 Sen. Mazie Hirono (D-HI), a member of the Senate Judiciary Committee, spoke out on Saturday to reveal what the real goal behind the impeachment effort against former President Donald Trump.

While appearing on MSNBC, Hirono said that the true goal of the impeachment push against Trump is to hold him accountable for the “violent insurrection” and prevent him from running for office again.

“It’s very clear, Tiffany, that we need to not only hold the president accountable through an impeachment trial but to get on with passing a COVID relief bill,” she said.

“And we can do both. Much of this depends on Mitch McConnell’s willingness to do the right thing for the American people,” she continued. “So, that’s where we are, Tiffany. I know we can do both. All it takes is will on the parts of the Republicans at this point.”

“Whether 17 of them will go along to convict this president of what we all experienced as a violent insurrection at the Capitol remains to be seen,” Hirono added. “I think a few of them will, but I don’t know that we’re going to get 17. But that doesn’t mean that we shouldn’t proceed to hold this president accountable, and that doesn’t mean we shouldn’t stop him from ever seeking elected office again, and that just takes a majority vote.”

This comes as Senator Amy Klobuchar (D-MN) also spoke out to claim that Americans are “going to get more and more evidence over the next few weeks” about Trump’s alleged insurrection.

“I thoroughly believe that we can handle this impeachment trial and just as the American people are doing, juggle what we need to get done,” Klobuchar said. “Get the homeland security secretary through. We just had the insurrection at the Capitol. Get people confirmed for Joe Biden’s cabinet. And yes, get people the help that they need. That’s what this next month is going to be about.”

“I think we’re going to get more and more evidence over the next few weeks as if it’s not enough that he’s sent an angry mob down The Mall to invade the Capitol, didn’t try to stop it, and a police officer was killed. I don’t really know what else you need to know,” she added.

“The facts were there,” Klobuchar continued. “We saw it right there on the platform during the inauguration, as you could still see the spray paint at the bottom of many of the columns.”

This piece was written by James Samson on January 24, 2021. It originally appeared in LifeZette and is used by permission.

Read more at LifeZette:
Biden Accuser Tara Reade Reemerges To Say It Was ‘Unspeakably Hard To Watch The Man Who Assaulted Me’ Be Inaugurated
Liz Cheney Squirms As She Twice Refuses To Say If Senate Should Hold Impeachment Trial For Trump
Reprogramming “Cultists” and Protecting Dignitaries of the Opposite Political Party