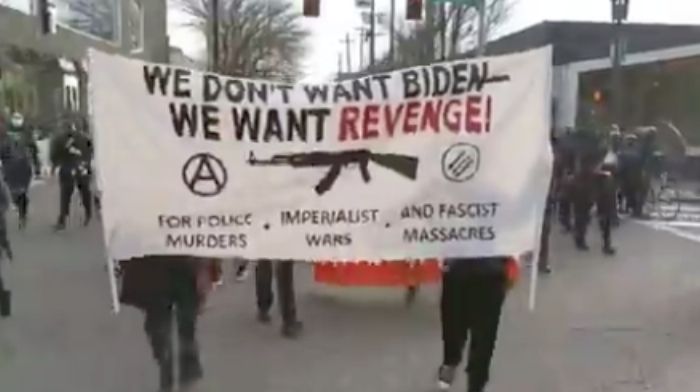 Leftwing protesters carrying anti-Biden signs marched through the streets of Portland Wednesday night while more demonstrations went on in Seattle. In Portland, damage included the Democratic Party of Oregon headquarters.

In Portland, reports by police say that roughly 150 people spray-painted anarchist symbols and smashed windows. Some of the demonstrators carried a sign that read, “We don’t want Biden we want Revenge!”

At one point, officers on bicycles made their way into the crowd to confiscate a pole that was affixed to a banner, fearing the pole would be used as a weapon.

Police were forced to use smoke canisters on the crowd, who threw objects at officers.

Violence Raged In Both Portland And Seattle

Several arrests were made in downtown Seattle. Protests there centered around ICE offices and a Federal Immigration Court.

Protesters attempted to break glass in the front of the building, but were thwarted by bullet-proof glass. Glass was shattered at nearby businesses and the Nakamura Federal Courthouse.

A spokeswoman for the Seattle Police Department, Valerie Carson, said, “We were prepared for this and we’ve got units from our community response group who are tracking this group and following them and hoping to deter as much criminal activity as possible.”

BREAKING: One arrest as protests turn violent on Inauguration Day in Seattle https://t.co/yUK9u542Ks

The story in Portland was much the same.

200 left-wing protesters are on the streets in Portland right now, with anti-Biden and anti-police messages.

The Portland crowd has now gone to the local headquarters of the Democratic Party, smashing windows and writing “Fuck Biden” pic.twitter.com/N01iXhyWll

The Portland protests have been carrying on nearly non-stop since the death of George Floyd in early 2020.

The mob violence was a sharp contrast to the unprecedented lockdown in the nation’s capitol in preparation for the inauguration of President Joe Biden.

In the aftermath of violent protests at the Capitol building two weeks ago, approximately 25,000 National Guard troops had been brought in, fencing had been put up around the National Mall, and Washington D.C. Mayor Muriel Bowser discouraged anyone from coming to Washington for the inauguration.

No threat or protest emerged.

RELATED: Seattle Police Chief Tells Residents: We Cannot Enforce The Law, You Are On Your Own

Seattle Residents Are Getting Fed Up

As there appears to be no end in sight to protests, demonstrations, and damage, many Seattle residents have had enough.

Anita Perry says, “It’s just so frustrating. This city is dying because of these people. We’re dying. this used to be a beautiful city, used to be a great place to live.”

Another resident, Angeliqu Harbin lamented, “It’s rough to see. We love our neighborhood. And this is a place people come-it’s a great destination. It just makes me sad to see the window looking like that.”

Perry says she is trying to sell her home and leave Seattle. “It’s not really worth it anymore. I just feel aggravated, all the businesses are closed up-what I moved here for, nothing is going on anymore. It’s really sad.

The Original Starbucks in Pike Place Market is one of several buildings damaged in tonight’s protests @komonews #komonews pic.twitter.com/Svbt9zq2qT

Many who live in Seattle said they are fed up with seeing smashed up windows and spray-painted businesses in their already devastated neighborhoods.https://t.co/P4wpsxV3Hj