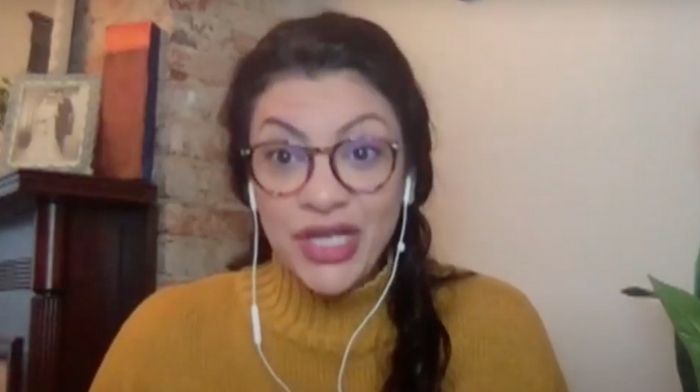 Representative Rashida Talib (D-MI) went off on Israel while appearing on the radically liberal show “Democracy Now!” on Tuesday, going so far as to accuse it of being a “racist state” because it did not include the roughly 4.5 million Palestinians in the occupied West Bank and Gaza Strip in its coronavirus vaccines program.

“I mean, I think it’s really important to understand Israel is a racist state and that they would deny Palestinians like my grandmother access to a vaccine, that they don’t believe that she’s an equal human being that deserves to live, deserves to be able to be protected by this global pandemic,” said Tlaib, a member of Rep. Alexandria Ocasio-Cortez’s (D-NY) radically liberal “Squad.”

“And it’s really hard to watch as this apartheid state continues to deny their own neighbors, the people that breathe the same air that they breathe, that live in the same communities — you could put a settlement wherever you want, but on the other side of that wall is a farm community village where my grandmother lives and many of our, you know, various family members and others that I know are trying to get to live a good life, a free life, free from these oppressive policies, these racist policies that deny them access to public health, deny them access to freedom of travel, deny them access to academic opportunities,” she continued.

Related: GOP Lawmaker Calls For Rashida Tlaib To Be Removed From Committee For Her ‘Anti-Semitism’

Not stopping there, Tlaib went on to talk about how supposedly it is “critically important” that Israel be called out as much as possible.

“It is so critically important that we call it out. Our country continues to enable that country and continues to enable Netanyahu, who continues to spew anti-Arab rhetoric that allows violence towards Palestinians to continue in a way that is so inhumane and doesn’t follow international human rights,” she said. “And so I think it’s very important. If anything, I hope my colleagues, I hope our country sees what the Palestinians have been trying to tell us for a very long time.”

“That Israel has no intention of ever being caring or allow equality or freedom for them as their neighbors. And you can see it with the distribution of vaccine,” Tlaib continued. “You also saw it with the testing and tracing. My family told me they didn’t have access to testing. They would get some side effects, and they would use the small little house that they had and quarantine the family member. They had no access at all for any preventive measures, any medication.”

“Again, that continues on, and we allow, again, enabling Israel to continue to do that,” she concluded. “They have the power to distribute that vaccine to the Palestinian people, their own neighbors, again, feet away from where they live, many of which again could expose them and their family, and it doesn’t — if anything, it just reiterates what the Palestinian people and human rights groups have been telling us, is that this is an apartheid state.”

It has long been abundantly obvious that Tlaib and the fellow members of “The Squad” have no respect for Israel, but it’s nothing short of disturbing that they aren’t even trying to hide their disdain for the nation anymore.

This piece was written by James Samson on January 19, 2021. It originally appeared in LifeZette and is used by permission.