On Park Avenue, a $1 billion tower is set to soar 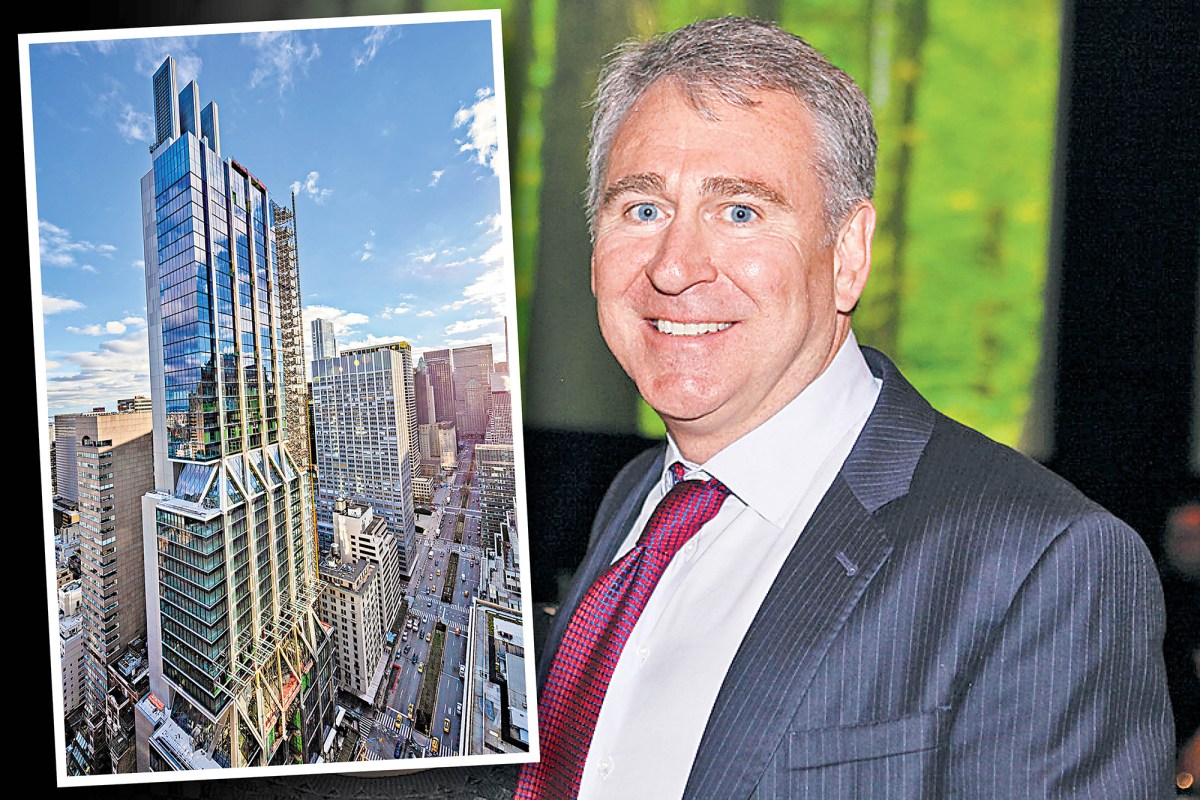 More than five years since the groundbreaking, L&L Holding Co.’s $1 billion gamble on Park Avenue’s future just received its temporary certificate of occupancy from the Department of Buildings. It allows Ken Griffin’s Citadel Enterprises to start moving in as soon as it completes its high-tech build-out.

Of course, 2022 is not 2016, when Citadel signed the lease. As the property world anxiously watches the project for signs of which way the pandemic-crippled leasing market’s headed, developer David W. Levinson revealed that:

Aggressively expanding L&L developed the striking edifice, distinguished by two graceful façade setbacks, with co-equity partner and co-developer Tokyu Land Corp. and co-managing partner BentallGreenOak. Its unique features include two “diagrid” floors with ceilings up to 38 feet; a 45-foot-high lobby; elevators that run at 1,200 feet per minute; and a double-height 26th floor club floor for tenants only. It will be the city’s first WELL-certified building for numerous health, wellness and environment-friendly features.

Rising to 897 feet, it isn’t as monumental as 1,401-feet-tall One Vanderbilt near Grand Central Terminal or other new towers in the Hudson Yards district. But it’s a bellwether for Park Avenue, which Levinson calls “the grand boulevard of commerce in America.”

After losing some large tenants a few years ago such as Wells Fargo, the corridor has rebounded with JPMorgan Chase’s decision to create a new headquarters tower; major upgrades at 280 and 299 Park Ave.; and a recent major lease for Raymond James at 320 Park. CBRE recently estimated the avenue’s space availability at slightly more than 12 percent, on par with Midtown.

All eyes now are on 425 Park, the first full-block tower on the avenue in a half-century. Levinson acknowledged, “This is clearly not a good market. We had to adjust pricing because the market tells us to do that. It’s the kind of market, whether at 425 Park or other high-end buildings, the smartest people can take advantage of it. They’d pay more of a premium when the market becomes healthier.”

He said the discount — which he wouldn’t quantify in percentage terms — won’t last forever. “We’ll increase prices again in late 2021 or 2022. Some guys will get really good deals until then.” Several such “guys,” mainly financial firms, are in “very serious negotiations,” he said.

The restaurant delay was by design, Levinson said. “We want better timing. We don’t want to have a restaurant when nobody can go to it,” he said of the open-ended ban on indoor dining in the city. “Daniel [Humm] and I speak a couple of times a week. We’re very excited. We want to finish it when people can actually go there.” It should be open late this year or early in 2022.

Urbanspace is coming to the rescue of the anemic FiDi eating scene. The expanding food hall and marketplace outfit is launching its sixth city location at 100 Pearl St., a GFP Real Estate-owned office tower between Coenties Slip and Hanover Square.

It’s a stroke of faith in the Wall Street area, where office buildings remain largely empty and some rental-apartment residents have fled.

The new culinary complex covers 14,722 square feet, much of it inside a 21-foot-high through-block walkway between Water and Pearl streets. To make room for it, GFP had to re-imagine its ground-floor public and private spaces — including the adaptation of the arcade for retail use. Such changes were encouraged by a 2017 rezoning measure intended to bring more life into little-used plazas and arcades in the Water Street corridor.

The new Urbanspace will have 16 “curated” high-quality food vendors. The company’s most recent lease was for the Zero Irving project near Union Square. Urbanspace president Eldon Scott said that after “a devastating year for restaurants, our food halls offer a supportive space” for chefs and the communities they serve.