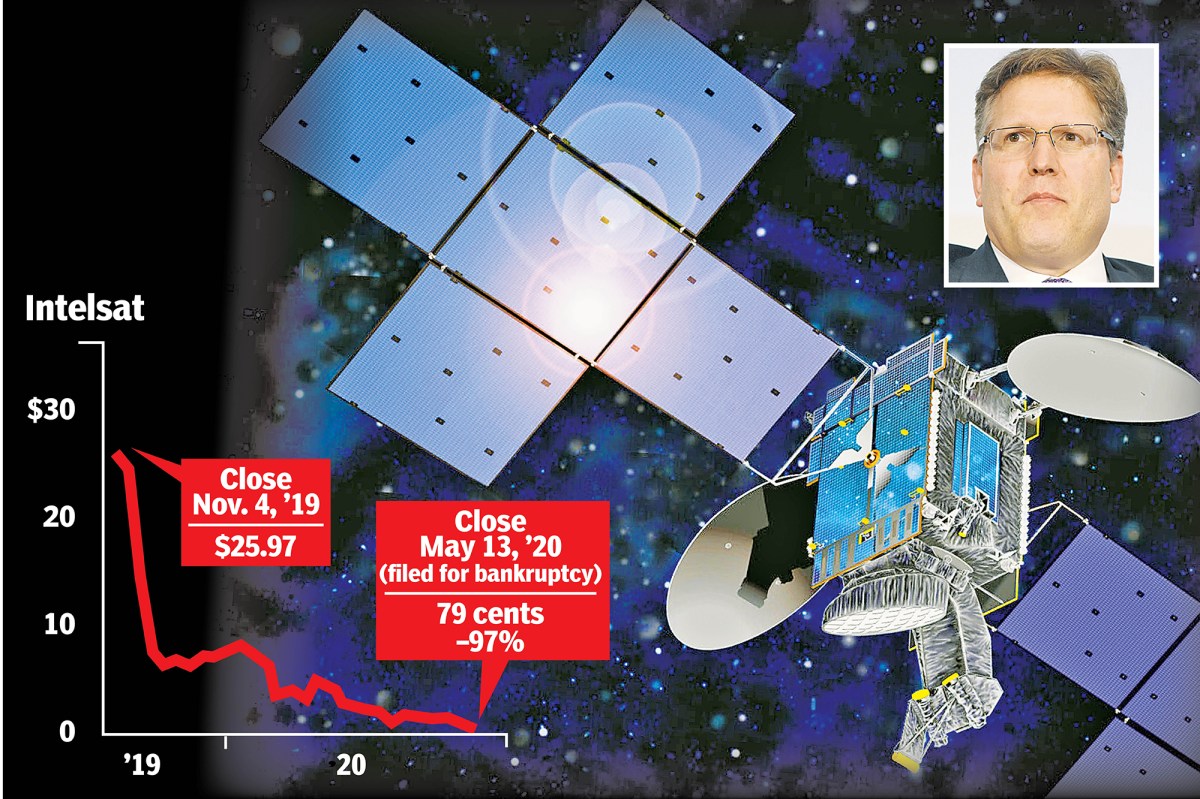 The chairman of satellite operator Intelsat is being sued for insider trading in an explosive new shareholder lawsuit that also dings private-equity giants BC Partners and Silver Lake Partners, a New York Knicks shareholder.

The Oakland, Calif., federal court lawsuit claims that David McGlade, Intelsat’s chairman and former CEO, sold stock in the satellite operator on Nov. 5, 2019 — mere hours after the company’s CEO learned that the Federal Communications Commission was leaning against a proposal that would have earned the company billions.

McGlade made the trade — together with fellow Intelsat insiders Silver Lake and BC Partners — via a $246 million block sale of 10 million shares, the lawsuit says. Weeks later, on Nov. 18, the FCC rejected Intelsat’s proposal to run the sale of government-owned airwaves it had been using for TV and radio communications — squashing its dreams of a $7 billion-plus windfall. By May, the company had filed for bankruptcy protection. The stock, which had been trading at around $23 a share ahead of the insider selling, closed Friday at 72 cents a share.

“This is the quintessential insider trading case,” read the lawsuit filed by law firm Labaton Sucharow on behalf of Intelsat shareholder Walleye Group. “Intelsat, a satellite operator, was successfully pursuing a bet-the-company-deal with the FCC. Its board chairman, defendant David McGlade, and its two largest shareholders, defendants BC Partners and Silver Lake, sold $246 million in stock the very same day they learned the FCC was turning against the deal.”

As The Post first reported in March, Intelsat shareholders have been fuming over the $246 million block sale since first learning that it took place the same day Intelsat’s chief executive, Stephen Spengler, met with the FCC’s senior counsel, Nicholas Degani, to discuss Intelsat’s ill-fated plans to profit off a government-owned telecom asset.

But shareholders had previously believed that only BC Partners and Silver Lake were behind the trades — claims that resulted in a couple of class-action lawsuits filed against the firms last year. Thursday’s lawsuit, which joins the earlier cases, cites an anonymous ex-Intelsat executive who says Spengler told him that the FCC was going in a different direction from the one proposed by Intelsat “just after” the Nov. 5 meeting. The exec “surmised it must have been one of the top three worst meetings Spengler ever had,” the lawsuit said.

Leading up to the meeting, Intelsat and a band of satellite operators had been proposing to help the government repurpose spectrum they had been using for a nationwide 5G wireless network by selling it via a private auction. The FCC under Ajit Pai seemed amenable to the plan until it started to receive pushback from Sen. John Kennedy (R-La.), who advocated for a public auction that would enrich government coffers instead of private industry.

“Shelling out billions for airwaves we already own is no way to handle taxpayer money,” Kennedy said publicly at the time. “These foreign satellite firms want all four feet and their snout in the taxpayer trough.”

Kennedy reportedly made his concerns known to Trump days before the Nov. 5 meeting.

“Just hours after that meeting, defendants began selling $246 million in stock in an overnight fire sale, avoiding over $185 million in losses that investors suffered as Intelsat promptly collapsed,” the lawsuit claimed.

The suit cites e-mails from Morgan Stanley, which brokered the trade, and an interview with the anonymous ex-Intelsat exec, who says he learned about the Nov. 5 block sale after noticing the high volume of trades on a New York Stock Exchange internal system, which he later discussed with CFO David Tolley, who only learned about them from the staffer.

The former executive recalled feeling that the trading was “outrageous” and that it was “obvious” that the insiders had been updated about the meeting, according to the suit.

The lawsuit doesn’t say how many shares McGlade might have sold, and he didn’t return requests for comment. McGlade, who was responsible for government outreach and advising the CEO on business and policy issues, owned 4.5 million Intelsat shares in 2018.

BC Partners also didn’t return requests for comment but previously told The Post that the trades were “based solely on available public information.”

Silver Lake, which owns a 7.5 percent stake in Madison Square Garden, declined to comment.  The firm didn’t have Intelsat board seats but had a contract that gave it special rights to information, including board meeting materials, the suit says.

Silver Lake has also come under fire for its well-timed sale of $158 million shares of software provider SolarWinds six days before it emerged that the company was subject of a massive hack, sending the shares down 40 percent.

“Silver Lake is a large shareholder of SolarWinds, just as in this case, and once again they are entitled to board level information about the company,” the Intelsat suit says.
SolarWinds has said it was not made aware of the hack at the time of the Silver Lake sale. Silver Lake pointed to a statement from private-equity firm Thoma Bravo, which sold SolarWinds shares in the same Dec. 7 transaction.

“We were not aware of this potential cyberattack at SolarWinds prior to entering into a private placement to a single institutional investor on Dec. 7,” Thoma Bravo said.

“Silver Lake is a large shareholder of SolarWinds, just as in this case, and once again they are entitled to board level information about the company,” the Intelsat suit says.

A hedge fund manager who was a large Intelsat shareholder in Nov. 2019 told The Post he was astonished by the SolarWinds news and does believe it represents a pattern. He is not part of the suit against Silver Lake, though he believes its trading in Intelsat was highly suspicious.

The firm pointed to a statement on the SolarWinds allegation from fellow PE firm Thoma Bravo that also sold SolarWinds shares in the same Dec. 7 transaction.

“We were not aware of this potential cyberattack at SolarWinds prior to entering into a private placement to a single institutional investor on Dec. 7,” Thoma Bravo said.