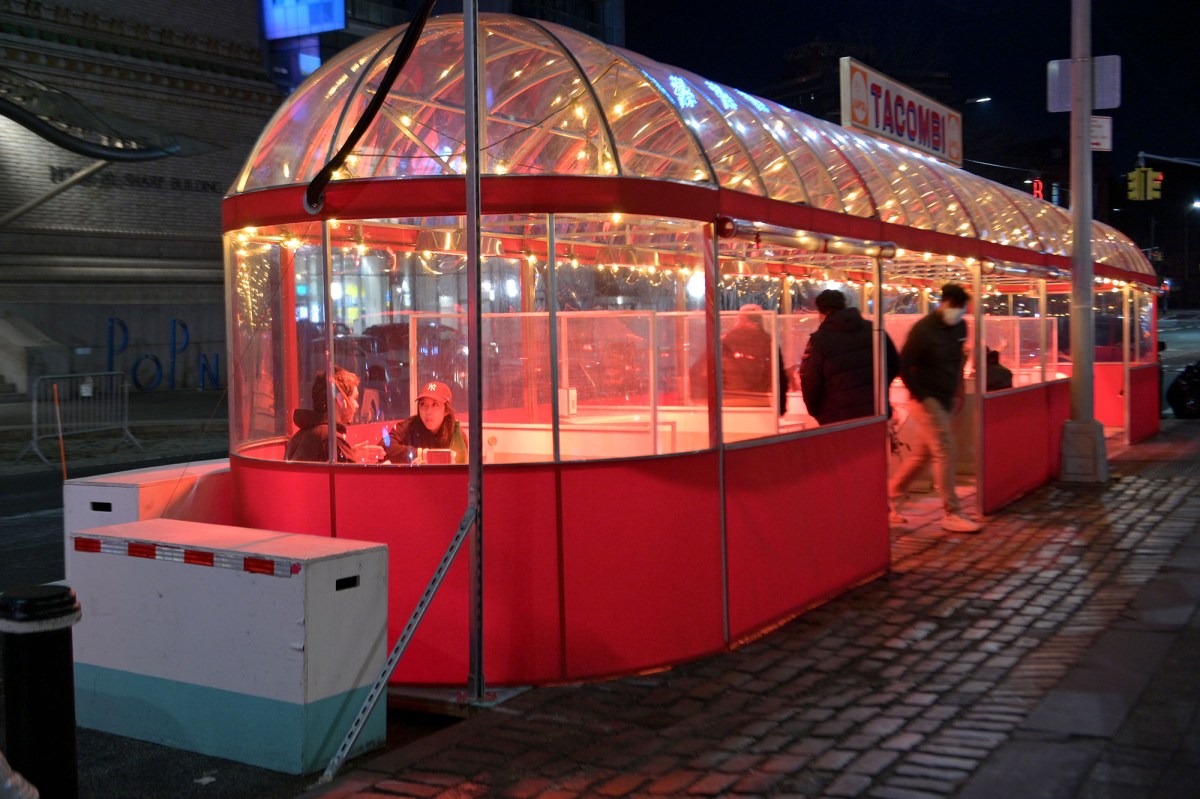 New Yorkers exhausted from nine months of wearing face masks and avoiding friends now have something new to worry about: Winterized outdoor dining structures that look like potential hotbeds of COVID-19.

Whether shaped like cozy yurts or fancy wooden cottages, there are some outdoor structures that have been so protected from the freezing cold that they appear nearly identical to indoor dining at a time when eating inside has been banned.

One diner who asked not to be named said she recently went to a high-profile West Village restaurant that was covered entirely in plastic, except for the entrance. Sure, it was warm, but “it was not done right and it is not OK. I didn’t feel safe,” she said.

Event planner Jung Lee says the issue crops up every time she scours the city for spaces for her clients to safely host small events. “The majority of outdoor dining spaces are enclosed in plastic with no ventilation,” Lee lamented.

“Very few restaurants are doing it properly because it is so expensive,” Lee said.

“The individual bubbles work because you are just with your group, but they are not common.”

While some restaurants have taken it too far, industry insiders say many owners are confused about requirements that outdoor dining can take place “under fixed and temporary roofs, so long as the area utilized is open on at least two sides.”

“The answer is, You have to have two open walls. But can it be a half-wall, open or louvered windows?” Carmac said, referring to walls with open slats. “The answer is that it’s up for interpretation, as per usual.”

In an effort to steer restaurateurs in the right direction, the New York City Hospitality Alliance sent a Dec. 28 e-mail blast reminding members of the rules and warning them that they should not cover their two openings with “plastic or other materials that restrict air flow.”

Missteps can be costly. Inspectors have slammed violators with fines of up to $50,000 and liquor licenses have been pulled, said Andrew Rigie, executive director of the Hospitality Alliance.

Without providing a tally, Riggie said many restaurants have been fined five figures, “from $15,000 to $50,000,” and have had their liquor licenses suspended or revoked, “putting small businesses into deeper financial distress.”

“It’s a real concern,” Riggie said. “It puts people out. That is why restaurant owners are put in an impossible position. They aren’t being provided adequate support from the government. It is a slow bleed. They are bleeding them out. It’s a horrible situation.”

“We regularly hear from restaurateurs who say that different inspectors provide them different guidance on what is permitted,” Rigie added.

City and state inspectors including the New York State Liquor Authority didn’t return requests for comment. But a City Hall source told The Post that the agencies are all on the same page, including in the exception provided to enclosed structures for individual parties so long they allow for “adequate ventilation.

“We can’t speak to what state inspectors are doing, of course, but we’re all working off the same set of state guidelines so there shouldn’t be any discrepancy,” the source said.

Stratis Morfogen, director of operations for Brooklyn Chop House, agrees that the inspections can be tough. “We’ve been inspected by every city agency and they all have a different definition,” he said.

Still, the steakhouse has never had a problem because it’s gone to great lengths to ensure it meets the letter of the law while also keeping customers toasty, Morfogen added.

The popular eatery has three rectangular-shaped outdoor dining structures — all of which are fully open on one long side and one short side. The structures are kept warm by 220 voltage electric heaters hung from the ceiling and directed directly on the diners.

“The heaters are expensive, but they work,” Morfogen said. “We’ve had a lot of inspectors come, and we are OK because the open sides deliver cross ventilation.”