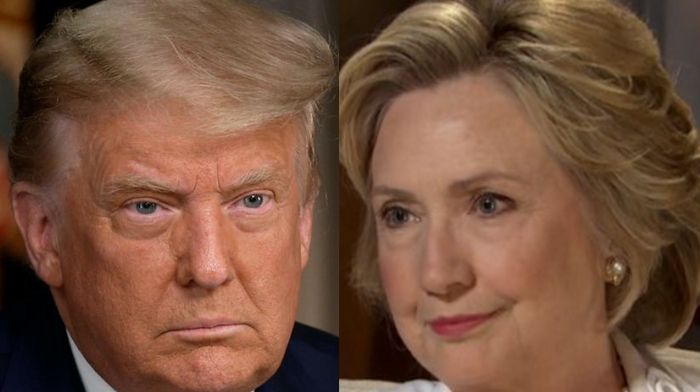 On Monday, the two-time failed presidential candidate Hillary Clinton penned an op-ed for The Washington Post called “Trump should be impeached. But that alone won’t remove white supremacy from America.” In the piece, Clinton wrote that Wednesday’s “attack on the Capitol” was a function of “white-supremacist grievances fueled by Donald Trump.”

Clinton nonsensically claimed that “whiteness” was Trump’s top priority and falsely claimed that he praised neo-Nazis as “very fine people” following the 2017 riots in Charlottesville, Virginia.

“Trump ran for president on a vision of America where whiteness is valued at the expense of everything else,” Clinton wrote. “In the White House, he gave white supremacists, members of the extreme right and conspiracy theorists their most powerful platforms yet, even claiming that there were ‘very fine people’ among the torch-wielding militia members who converged on Charlottesville in 2017.”

Clinton went on to predict that the riot at the Capitol, which she saw as an “insurrection,” will lead to “an even greater tragedy” if digital censorship is not amplified to combat “conspiracy theories” subscribed to by supporters of President Donald Trump.

Related: Chelsea Clinton Speaks Out To Reveal How She And Hillary Reacted To Capitol Riots

She claimed that our country is plagued by a group of citizens who value “whiteness” more than “democracy,” going on to cite a book praised by Oprah Winfrey framing the U.S. as built upon a racial “caste” system:

In Isabel Wilkerson’s new book “Caste,” she cites a question from historian Taylor Branch: “If people were given the choice between democracy and whiteness, how many would choose whiteness?” Wednesday reminded us of an ugly truth: There are some Americans, more than many want to admit, who would choose whiteness.

It’s sobering that many people were unsurprised by what occurred last week, particularly people of color, for whom a violent mob waving Confederate flags and hanging nooses is a familiar sight in American history. Consider what we saw last June, when Black Lives Matter protesters peacefully demonstrating in Lafayette Square were met with federal officers and tear gas. If the first step toward healing and unity is honesty, that starts with recognizing that this is indeed part of who we are.

Clinton then alleged that the riots at the Capitol were acts of “domestic terrorism,” while calling for increased political censorship across the Internet to stop “violent speech” and “conspiracy theories”:

“Removing Trump from office is essential, and I believe he should be impeached,” she said. “Members of Congress who joined him in subverting our democracy should resign, and those who conspired with the domestic terrorists should be expelled immediately. But that alone won’t remove white supremacy and extremism from America.”

“There are changes elected leaders should pursue immediately, including advocating new criminal laws at the state and federal levels that hold white supremacists accountable and tracking the activities of extremists such as those who breached the Capitol,” she added.

“Twitter and other companies made the right decision to stop Trump from using their platforms, but they will have to do more to stop the spread of violent speech and conspiracy theories,” Clinton argued.

Clinton concluded her op-ed by claiming that “real patriotism” requires implementation of her recommendations.

This piece was written by James Samson on January 11, 2021. It originally appeared in LifeZette and is used by permission.

Read more at LifeZette:
The Possibility Of A Patriot Party
Giuliani Calls For Trump To Declassify Everything – Says He Owes It To MAGA Movement
Jon Voight Defies Hollywood To Praise Trump After Capitol Riots – ‘It’s Not Over’