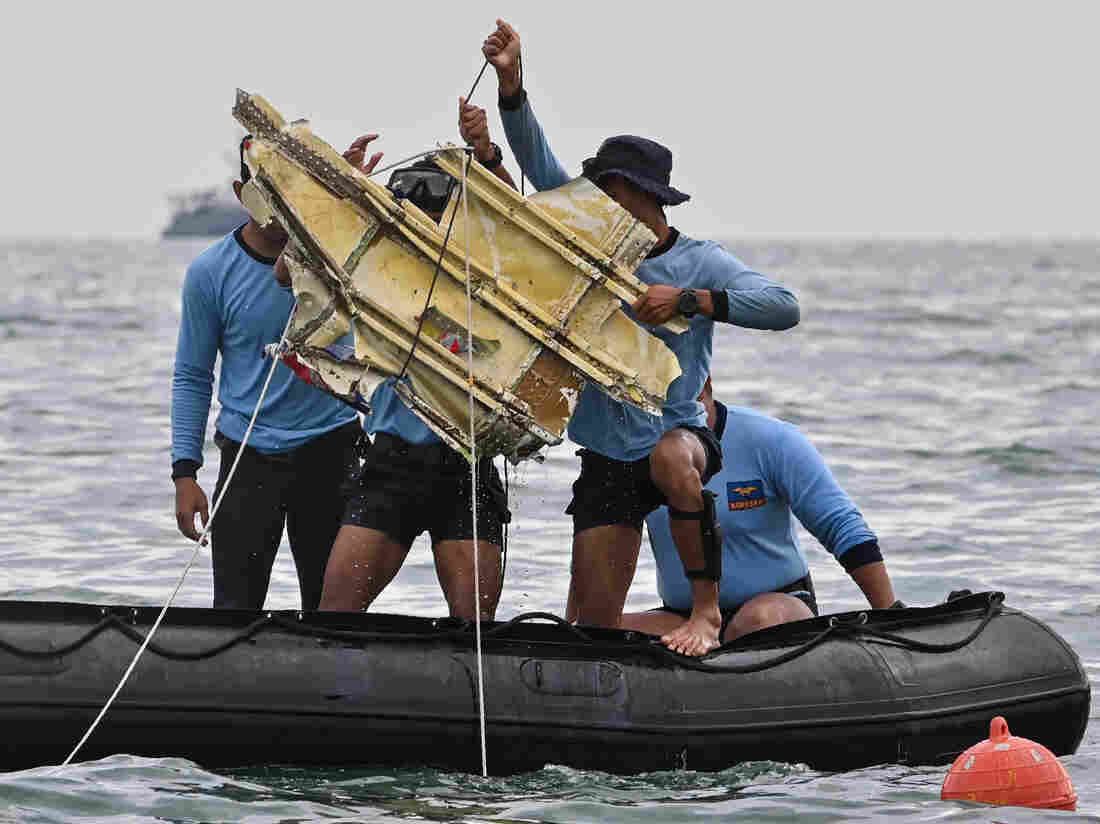 Indonesian Navy divers hold wreckage from Sriwijaya Air flight 182 during a search and rescue operation at sea near Lancang island on Sunday.

Clues may come soon as to what caused the crash Saturday of an Indonesian airliner with 62 people on board. Authorities said Sunday that they know the location of the so-called black boxes of the Boeing 737-500 that went down in the Java Sea shortly after taking off from Jakarta, the nation’s capital.

Parts of the plane’s fuselage and other objects were found in 75 feet of water, prompting further rescue searches in the area, the Associated Press reported. Authorities have also retrieved body parts and clothing, but no survivors have been found.

“We feel powerless. We can only wait and hope to get any information soon,” said Irfansyah Riyanto, who had five relatives on the flight, according to Reuters.

“Hopefully we can lift the black boxes in short time to determine the cause of the crash,” said Hadi Tjahjanto, head of the nation’s military.

Divers reported good visibility in the water, “allowing the discovery of some parts of the plane,” Tjahjanto said in a statement. “We are sure that is the point where the plane crashed.”

Aircraft parts retrieved by the search teams included an altimeter radar, emergency chute and a piece that may have come from the plane’s tail, said Nurcahyo Utomo, an official with the country’s National Transport Safety Committee.

Flight 182 had 50 passengers — all Indonesians, including 10 children — and 12 crew members aboard.

President Joko Widodo expressed “deep condolences” over the disaster and urged the public to pray for finding the missing. “We are doing our best to save the victims,” he said.

On Saturday, Boeing said in a statement, “Our thoughts are with the crew, passengers, and their families.” The company added that it was in contact with Sriwijaya Air “and [stands] ready to support them during this difficult time.”

Airport authorities lost contact with the plane at around 2:40 p.m. local time Saturday, the Ministry of Transportation said. The plane had taken off from Jakarta less than an hour earlier bound for Pontianak, a city on Borneo island. About four minutes after takeoff, the plane lost more than 10,000 feet of altitude in less than a minute, according to Flightradar24, a flight tracking site.