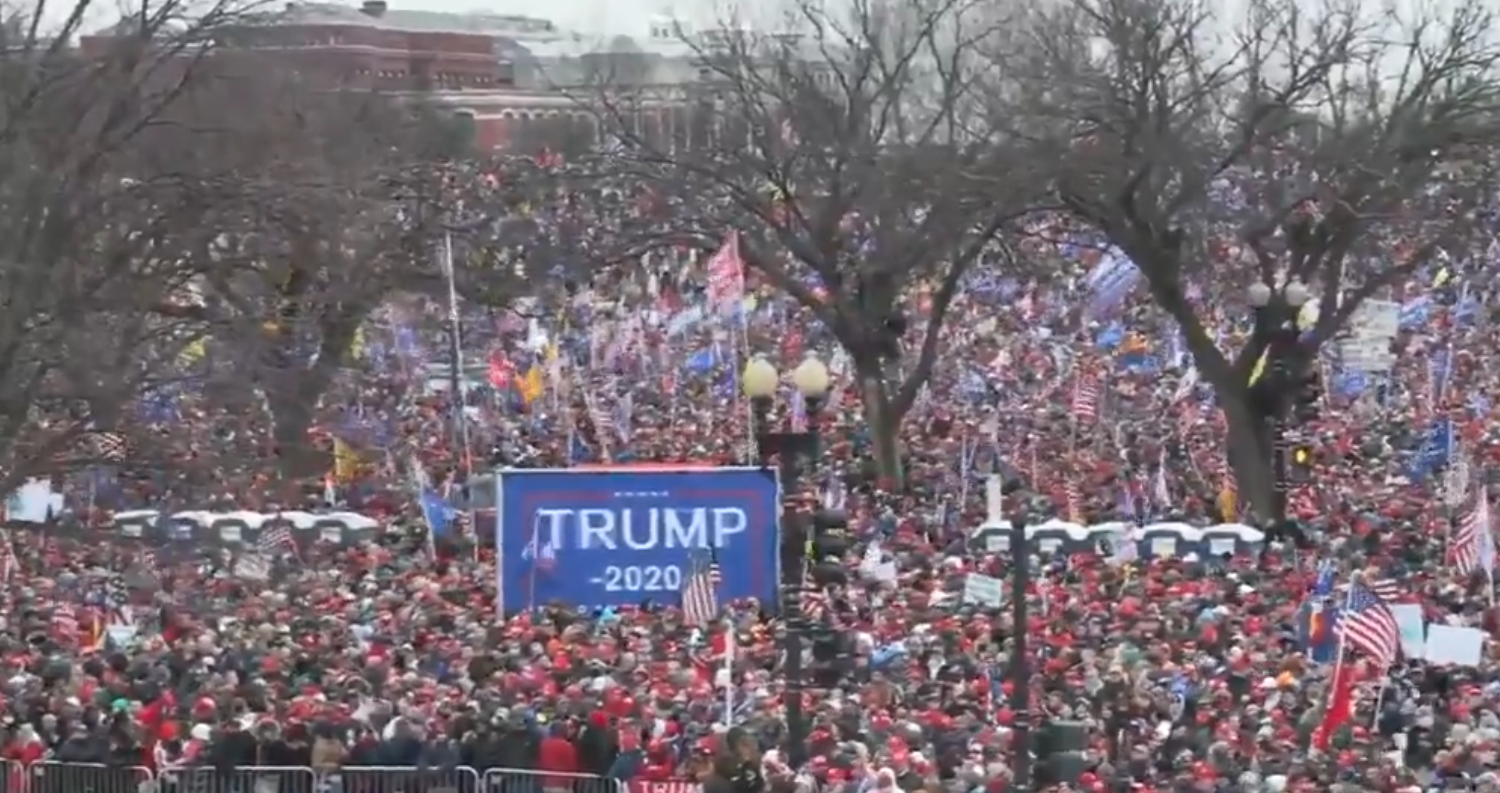 What was supposed to be an event-filled day in Washington D.C. turned violent as Trump supporters, in town for a huge MAGA rally to protest what they believe to be rampant voter fraud in the November election, clashed with Capital and metro Washington D.C. police on Wednesday.

Tens of thousands of Trump supporters from all over the country came to make their voices heard on the day Congress was to count electoral votes and officially certify the 2020 Presidential election.

This crowd at the Trump rally is INCREDIBLE!pic.twitter.com/hSCetcCLsb

Crowd continues to increase in size with Trump supporters for today’s rally in Washington, DC. pic.twitter.com/poVMoDPBoa

RELATED: Republicans Who Blame Trump For Georgia Senate Losses Need To Look In The Mirror

Chaos Ensues At The Capitol

However, things took a turn for the worse, as throngs of protesters holding MAGA and Trump flags and signs stormed the Capitol building itself.

The chaos was captured by reporters on the ground and Twitter users who were in Washington.

Police used pepper spray. The Capitol building itself was evacuated.

BREAKING: THE MOMENT CONGRESS joint session halted, because protestors entered the U.S. Capitol building. All members, including Mike Pence, were evacuated from the building. pic.twitter.com/E6g5c8QtQC

The Capitol building has been placed on lockdown and it is unknown how long that will be in effect.

A 6pm curfew for the city has been put in place for this evening, while Washington D.C. Mayor Muriel Bowser had said Monday she would call in the National Guard if the gathering got too out of hand.

As of Wednesday afternoon, President Trump himself called in Guardsmen to restore peace, but not before a protester was shot inside the Capital building.

There were reports that guns were drawn inside the Capitol, near the House chamber.

Police have guns drawn. We are hiding behind chairs and tables on House gallery

Around 4pm Eastern time, graphic video was posted on Twitter of a young woman being shot.

It is unclear at this time who shot the woman. She was in critical condition at an area hospital, and has now been reported to have died from her wounds.

All this chaos unfolded as thousands of Trump supporters gathered at what was billed the “Save America” march.

Many Trump supporters believe that the election was fraudulent, and that many state and federal officials have failed to address and hold to account those involved, though the media and fact-checkers insist no widespread fraud has occurred.

Twitter was filled with pictures of thousands of peacefully gathered, flag waving people.

Tens of thousands of Trump supporters are out in DC this morning, packing The Ellipse and now filling up much of the space near the Washington Monument as an overflow area to watch the rally #DC #SaveAmericaMarch #WashingtonDC #January6thDC pic.twitter.com/PaYZsRXWk3

Roughly 40 minutes after the melee had begun, President Trump called upon his supporters to remain calm and end any violence.

About an hour later, he put out a second tweet asking for calm.

RELATED: Trump Tells His Supporters To Go Home In Peace After They Storm The Capitol

I am asking for everyone at the U.S. Capitol to remain peaceful. No violence! Remember, WE are the Party of Law & Order – respect the Law and our great men and women in Blue. Thank you!

Please support our Capitol Police and Law Enforcement. They are truly on the side of our Country. Stay peaceful!

There are mixed feelings on social media about what is taking place.

Some think that the violence, while not justified, has been building for quite some time.

Others feel as if conservatives and Republicans are using the tactics of Antifa and that the violence is in no way justified.

It is unclear at this time when the Senate will continue with the certification process and hearing challenges to those results.