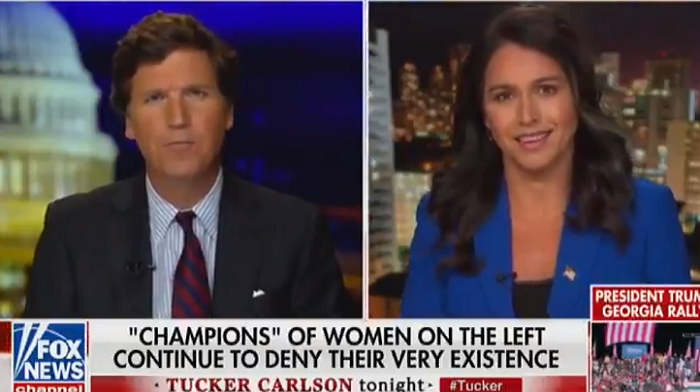 Tulsi Gabbard, in an interview with Tucker Carlson, blasted her own Democrat party for eliminating gendered language from the official House rules.

Speaker Nancy Pelosi proposed to eliminate the language and stated instead that only gender-neutral terms such as “parent,” “child,” “sibling” and “parent’s sibling” would be allowed.

The rules package was passed along partisan lines on Monday.

Gabbard called the removal of gendered language by the Democrats “the height of hypocrisy.”

Removing the language, according to the Democrat Representative, “does the very opposite” of empowering women.

“It’s the height of hypocrisy for people who claim to be the champions of rights for women to deny the very biological existence of women,” she criticized.

“It’s mind-blowing because it shows just how out of touch with reality and the struggles of everyday Americans people in Congress are.”

Tulsi Gabbard blasts the new House rules that get rid of “gendered language” on Tucker:

“It’s the height of hypocrisy for people who claim to be the champions of rights for women to deny the biological existence of women.” pic.twitter.com/eoQEl1QNWR

That was until Democrat Rep. Emanuel Cleaver embarrassed himself by ending an opening prayer for the 117th Congress by saying “Amen and Awoman.”

Dems open congress with a prayer that ends “amen and awoman.” Amen is a Latin word that means “truly” or “so be it.” Awoman is a nonsense word that means nothing. Dems find a way to make everything stupid and nonsensical. Utter clowns, all of them.

“Their first act as this new congress could have been to make sure that elderly Americans are able to get the COVID vaccine now alongside frontline healthcare workers, elderly Americans who have the highest mortality rates from this virus,” she countered.

“But instead of doing something that could actually help save people’s lives, they’re choosing instead to say, ‘Well, you can’t say mother or father in any of this congressional language,’” Gabbard continued. “It’s astounding.”

She Has Infuriated Her Fellow Democrats On This Topic Before

Gabbard was also on with Tucker Carlson to discuss legislation she introduced last month which would force Title IX to be applied based on whether a person is assigned female at birth.

In other words, stop taking opportunities away from female athletes by allowing biological males to compete in their sports or on their level.

Her legislation “was created out of this recognition that there is a biological distinction between men and women and boys and girls and … because of that there needs to be a level playing field for girls and women to be able to compete and play in sports,” she explained.

My ‘Protect Women’s Sports Act’ is based on science. It safeguards equality & ensures a level playing field for girls & women competing in sports. It upholds Title IX’s original intent which was based on the general biological distinction between men & women athletes based on sex

“The reason why our bill is necessary – to strengthen and clarify and uphold Title IX – is because of the things that you’re talking about,” she told Carlson.

“Because there are people who are trying to undermine the very reason why Title IX was put in place by denying my existence, denying the existence of biological women.”

Gabbard recently blasted Democrats for suggesting her adherence to science amounted to ‘transphobia.’

Title IX is a historic law that positively changed everything for women & girls. This video explains how, and why I introduced the Protect Women’s Sports Act – to clarify, uphold & strengthen the original intent of Title IX, ensuring a level playing field for girls & women. pic.twitter.com/B0647yCGmW

The Hawaii Democrat also made news in December by bucking her own party, introducing a “born alive” amendment that protects infants who survive abortion.

Tulsi Gabbard also introduced a “Born Alive” bill protecting infants who survive an abortion. I’m waiting for Tulsi to realize she belongs in the GOP. https://t.co/E6Kj9bBdjS

Gabbard did not seek reelection to Congress in 2020 and her seat will be filled by Kai Kahele representing Hawaii’s 2nd Congressional district.

Tulsi Gabbard should get back in the political fray and run as a Republican – in the party where she rightly belongs.